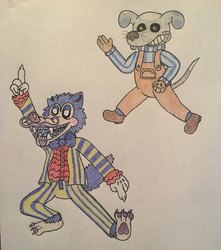 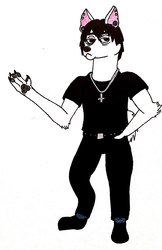 Originally posted on my art blog on August 23rd, 2017
I had this weird dream where I was working in a goth clothing store and I became a ghost to help with the store or something. But more importantly two notable characters appeared from the dream, Marten and Marshall.

In the dream, Marten was this artist making a video game and wanted to draw me as a design for his video game. He had an upbeat personality and loved talking to others. He is also a giant monster and ghost fucker. While Marshall was the manager of sorts for the store and who couldn’t give any fucks about anything. He didn’t care I was a ghost, told me he didn’t need my help (even though he originally needed me to be a ghost for something, and never smiled once in the dream. He was not amused by Marten and his ideas (especially Marten wanting fuck a ghost). But Marten and Marshall, from what I could tell, knew each other for years and seemed like best friends (odd best friends anyway). Also, both were human in the dream. When I woke up I just couldn’t get them out of my head so I decided I’ll make them into my ocs.

Anyway, let’s start with Marten. I made him into an Ibizan Hound with a notched ear (and two holes in his other ear) and I gave him some piercings (which he didn’t have in the dream). His common outfit is based on the one he wore in the dream with slight changes (making his black skinny jeans torn, bright colored socks, and converse shoes). He is an artist who does a lot of weird drawings and paintings and his designs have been used in video games. He is an extreme extrovert, loves making friends and is always seen smiling. Always wears long sleeve shirts even if it is hotter than hell and loves the color pink. Also, he still wants to fuck a ghost someday.