The Stormtrooper That Banged His Head On The Door by Phraggle 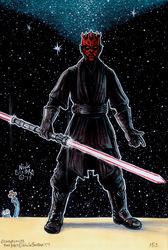 The Stormtrooper That Banged His Head On The Door

It's my favorite stormtrooper from " Star Wars, A New Hope ", the stormtrooper that bangs his head on the door. I remember the night I first caught it, it was in the early 90s. I was up late watching when I first saw it either cuz I was up doing homework or waiting for newspapers. Everyone was asleep at the time but I wanted to wake everyone up and spread the word. I waited though. I've since named him Denty... cuz he'd have a dent on his forehead. Here's a recent article about the actor behind the head-banging stormtrooper. http://www.hollywoodreporter.com/heat-vision/star-wars-40th-anniversary-head-banging-stormtrooper-explains-classic-blunder-1003769