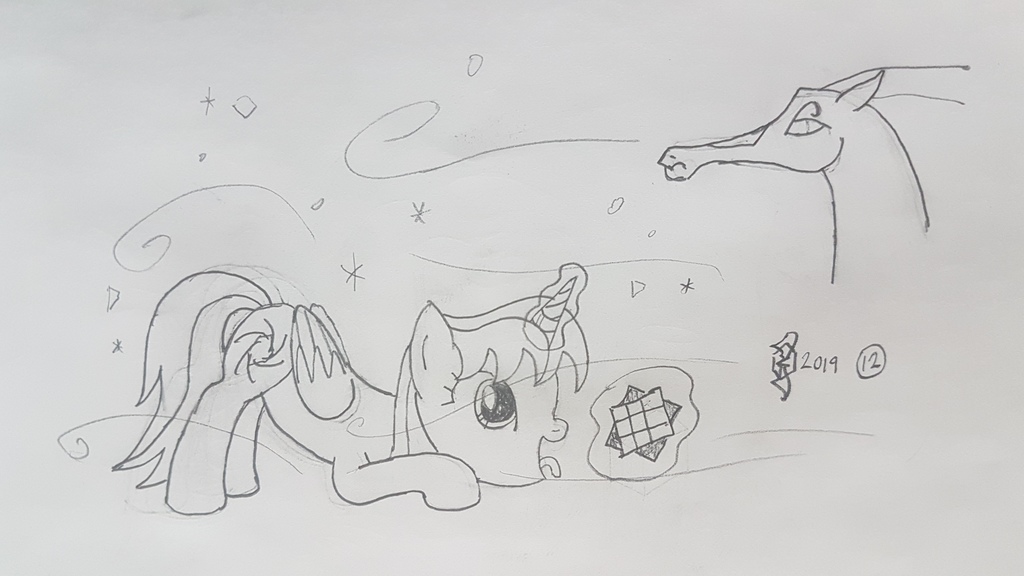 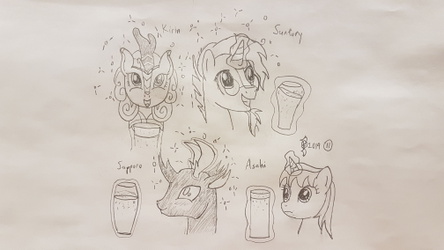 Spindle: In Japan, all problems seem so far away. Ponies, kirins, dragons and the like strut in harmony across streets, with the occasional chatter and hum. Inside buildings the scenes are quiet and collected: the early morning workers getting a snack from the convenience store, praying at whatever temple suits them and so on. The same atmosphere extends to television programmes, which feel more like small talk among presenters and may have a strong viewer interaction component.

Parcly Taxel: Stare at the newspapers (or news aggregators like Hachima Kiko) long enough, however, and you see problem after problem. For example:

And now we were going to move to a place very far away.

Spindle: Domestic air travel, like Parcly's flight from Fukuoka to Osaka Kansai, is much like the Shinkansen when it comes to travellers' services. Nearby shops harbour local specialities or easy-to-carry goods as a parting gift to the traveller, but non-travellers can also partake in them because these shops are not behind immigration gates.

Parcly: Under slightly cloudy skies, my flight to Osaka took all of 70 minutes. Beneath my fluffy belly a panorama of Japan played out: first the sprawling city of Fukuoka, then its suburbs, then far-flung farms and golf courses and finally steep mountains prominent even in the Pacific Ocean. The intervening sections of the Taiheiyō Belt cropped up as shining white flecks, but lakes and rivers shone brighter.

Closer to my destination I saw the Akashi Kaikyō Bridge (明石海峡大橋), but the land ahead looked larger than that which I had just left. I then realised I had been flying over Shikoku the whole time.

Spindle: On arrival we took several trains to our accommodation in Tanimachi (谷町). The first train got us out of the airport and so was filled with international tourists. The second train, from Tennōji (天王寺), would have been the last if not for an accident on the direct route, forcing a third train. We entered an abnormal number of lifts – from platform to passageway back to platform and up to surface – one of them only spanning six steps.

Silverstream: It's a bit of a hassle when you have luggage and your stay is the only room on the fifth floor yet needs taking a flight of stairs to reach. I like stairs, but the luggage doesn't.

Then Parcly and Spindle were told they could use the lift since it directly linked to their room. Oh well.

A quick rest on the sofa and she was out again, this time to a seafood izakaya (居酒屋) called Toya in Kyōbashi (京橋) reachable by the Keihan (京阪) Railway. Sandwiched between a cemetery and an alley, there are no chairs; all tables are standing room only. Though it was late in the afternoon and wind currents intensified a little as her meal progressed, she devoured oysters, tuna and sea urchins without complaining in the slightest.

Parcly: It was only lunch. Later, as sunset led into night, we burrowed into the rail-mall complex around Ōsaka and neighbouring stations. Bumping into ponies with every step. Entrances at every turn. Background music competing with crowd chatter. Still a little oasis in a chair at Yodobashi.

Twilight Sparkle: She found those mechanical puzzles she loved so much on the fifth floor and played around with them like a diamond dog around diamonds, until Spindle blew her away. "What do you want for dinner? Or would you just like to spend the night as a windigo?"

Parcly: I ended up buying my dinner from one of the underground food halls, a beef bento box. It was listed at display as ¥1000 including tax, but notice of a timed 30% discount had been put up, so I took it.

With that settled, I returned to the accommodation (strangely called "International College") and ate dinner, then went back down to buy new food for future breakfasts. The city around me had become denser – I knew I was going to be spoilt for choice.