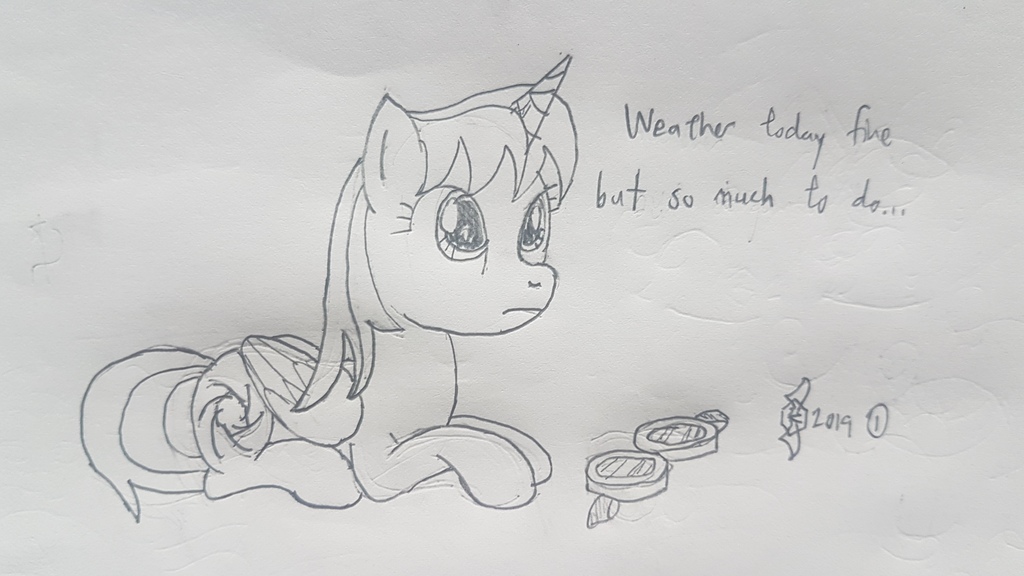 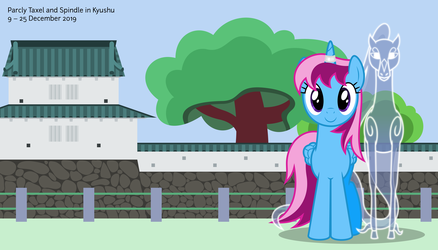 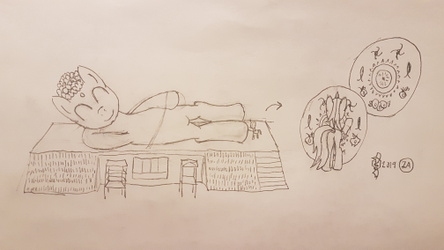 Parcly Taxel: There are two main advantages to flying or taking the train at night for long-distance travel. The first advantage is that you minimise the effects of jet lag, since a pony's internal clock (circadian rhythm) is most receptive to changes in surrounding brightness, and the corresponding hints as to time of day, when the mind is playing in its timeless dreamscape. The second advantage is that you don't waste time – there's usually nothing productive to do plowing through the sky or the open meadows, far away from the influence of other magic sources.

The main drawback, assuming you're not a nocturnal like the night guards, is that you agonise over last-minute preparations during your waking hours. I had to finish granting wishes I promised to grant before the holiday, wishes that ate into lunchtime. Some items I needed, like the mane comb and toothbrush, were still not in their travel pouches when I woke up. Then I had to allocate some time to polishing and cleaning my genie bottle, like all genies do with their beloved vessels.

Spindle: The relationship between me and Parcly is less one-sided than that between Twilight and Spike. Parcly is a windigo in a pony's body, the result of an arrested transformation that began when I met her for the first time in a storm of hatred. Her innate unicorn magic became "windigo-powered", imbued with the rigidity and persistence of the Frozen North; in return she agreed to share her emotions with me. This arrangement helped Parcly make more friends while under Luna's tutelage than she would have otherwise.

Even though windigos are spirits, they are not completely dissociated from the material world. Because they can control ice, they use little ice beads to manipulate things in the manner of a dragon or hippogriff (holding an item, pressing a button). Those beads can cause frostbite if applied on a pony's coat, however.

Parcly fell onto her bottle's neck in the late afternoon, exhausted from the friction between her genie mist and the inner walls. After I completed the packing for her, I gave a gentle rub at the bottle's widest point, which is the most sensitive for a sleeping genie. She spurted, then billowed out in a swirling blue cloud.

Parcly: It is possible for genies to not have a good rest. Turbulence within the walls is a telltale sign – ideally, at the point of dreaming, it should be as still as a cup of water. Flying while tethered and asleep makes for a very bumpy ride.

Spindle: Routing the outward journey was also complicated by the usual stop, Hong Kong, being engulfed in riots for months before departure. It lies about halfway between Canterlot Castle and Japan, so a transit there minimises the maximum stress, but we had to move our plots now. Instead we aimed for Incheon first.

Parcly: I hadn't landed in South Korea for a long while. Incheon is a nice place, though: its airport regularly competes with Canterlot's own for the title of "world's best airport". The world. The world!

Spitfire: You do realise that awards like this are not recognised by the Wonderbolt Academy, huh? That's about user experience and not performance.

…on second thought it does give a bit of advice for the travelling pony.

Spindle: I'm neutral to airport awards. I just roll along with whatever facilities and procedures are present.

Parcly: When we reached the airport it was eight after dark, and I had a beef burger for dinner. There's no time for luxuries before a flight, when any meal (as long as it provides enough energy) is good enough.

Restaurants near where I was eating were unusually quiet. Many families had left for their own vacations earlier than me, when the primary and secondary schools had finished marking exams and sending them back for nigh-endless chit-chat about scores, grades and future careers. The Canterlot educational system remains relentlessly competitive, despite Celestia's efforts to emphasise the process over the product.

Spindle: That quietness was the prelude to the long flight to Incheon, a preview of the conditions so far up in the air, even above the airplanes carrying the masses. When the food had enough time to digest in Parcly's belly, from a standing start she leaped into the air and accelerated towards north of northeast, always having that line from Admiral Tōgō (東郷 平八郎) a hundred years back: