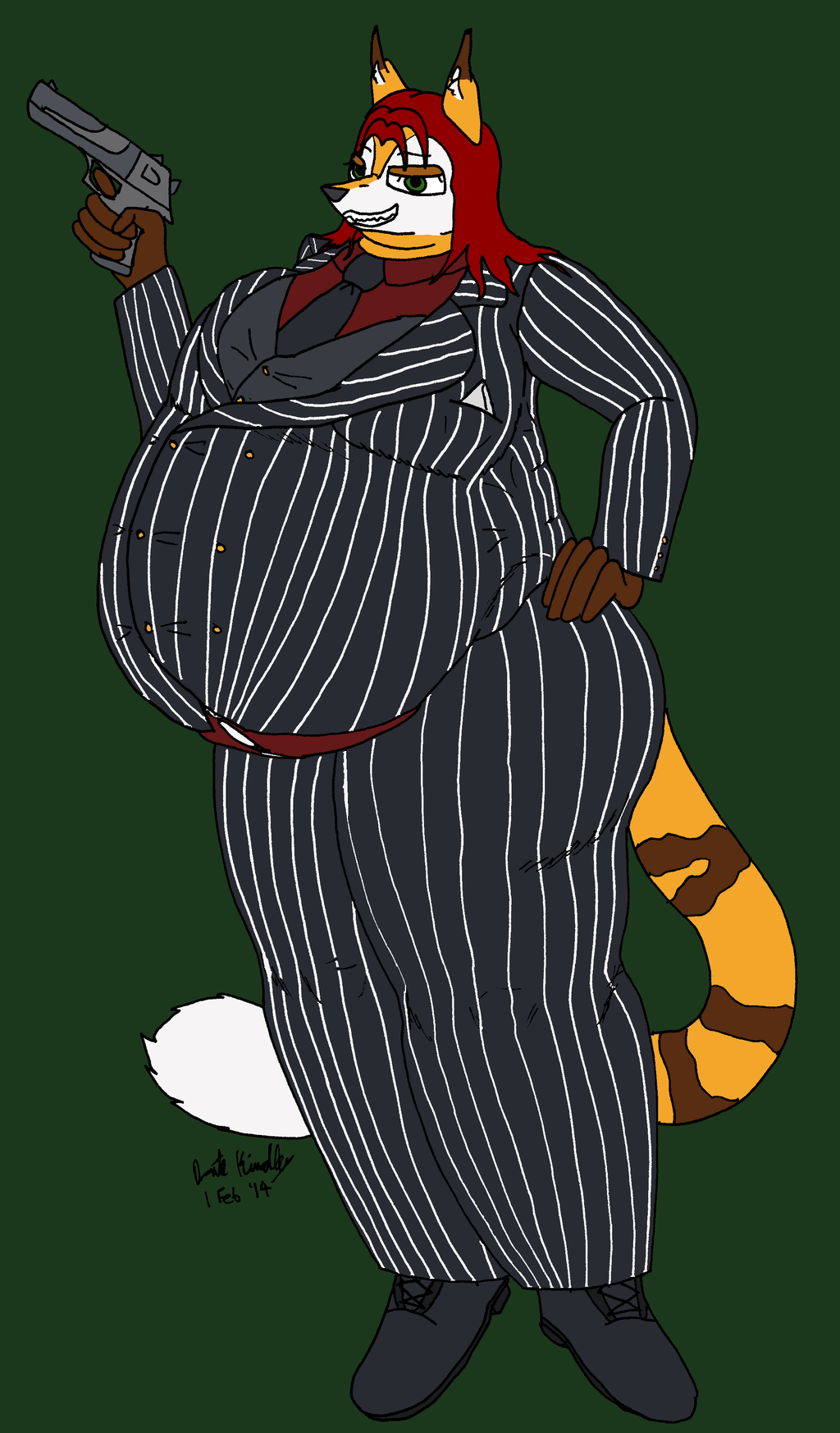 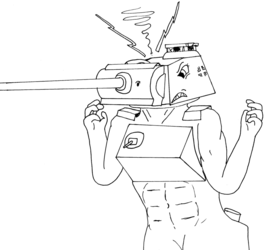 A little story I made of Riley, the big, fat, and strong lynxuki I love. X3

“So, what you're sayin' is...” rumbled a bass female voice. “..Is that you've barely made enough to pay the interest, let alone the original amount?” The owner of the restaurant, a middle-aged wolf, shifted nervously. He'd borrowed several thousand dollars to keep his business from going under, but it hadn't worked out. The return never came. He's thought that the O'Shane family would be more...lenient...to its debtors than their rivals, and now, he was about to find out whether his assumption was mistaken. That the mob boss herself, Riley O'Shane, a lynx and seluki hybrid, sat in front of him was not a good sign in any case.

And Riley was enormous. She stood 7'3” tall, and had girth to match; her gut looked like she could swallow a man and not bloat in the slightest, while her backside was the size of beach balls. Her breasts were no laughing matter either. The scary part though, were the muscles bulging underneath her sleeves. Riley was obese, yes, perhaps morbidly so, but she had tremendous power hidden underneath. The Lynxuki sighed, glaring at the wolf, who visibly cringed. “So ye know what's gonna 'appen?”

Riley smirked. “You'll just have to pay me in a...different way.” Her immense stomach rumbled, quivering slightly. “You'll pay me with food. Each week, Oi want your entire stock. That means your maximum capacity. The day of the week doesn't matter, so long as you do it on the same day each time.” She stood up, signifying an end to the conversation. “Call me when you've decided when to start.” Without waiting for a reply, she walked out.

Riley leaned back, letting out a long, low belch. “Mmmf, Oi tell ya...'e may not be a good investment if ye want to make money...but damn, that's good...” Her bloated stomach gurgled, crammed full of all sorts of food. Her suit was burst to shreds at the front, unable to contain her gut as it bloated like a raft, more than quadrupling in size over the course of her massive meal, the table groaning under its weight.

And she wasn't the only one. Several of her lieutenants were bloated as well, though to a lesser degree. The woman were thin or somewhat chubby before, and now they looked ready to give birth. “Urf, yeah,” one groaned. “I couldn't eat another bite...”

“But Oi could,” sneered Riley, as she waved for another round of dessert to be brought out. “Mmn, good thing it's -urrrrrp- only once a week,” she said between bites. “Otherwise Oi'd go immobile...” Not wait6ing for a reply, she quickly shoveled down the remaining sweets, and contently drifted to sleep.

A button popped off Riley's shirt as she climbed out of her car, pinging against the masonry of the nearby building. “Ah shite, another one...” She'd swollen up quite a bit since striking the restaurant deal, and her suit no longer fit; indeed, it looked ready to completely explode if she ate the smallest bite: seams creaked, several already burst; many buttons missing, with large gaps between the remaining ones where furry flab poked through. Patting her gut, she waddled into the tailor shop.

“Ah, hello Ms O'Shane!” greeted the old dog who owned the place. “Needing a new outfit, I see?” She was another one of Riley's debtors; however, she was one of the better ones, who payed on time, and so Riley made sure she got good service. And with someone of Riley's size, good service came often.

Riley nodded. “Yep, it's that time again, Maddy.. Oi've, ah, come into some free food recently, and it's really added to my figure.” She patted her enormous gut. “Not that Oi've stopped working out mind you.”

Maddy smiled. “Right this way,” and led Riley into the measuring room. As usual, Riley removed her clothes, but unusually removed her bra and panties as well. “Outgrown those too, have you?” Maddy shook her head, and nudged the immense Lynxuki onto the scale. “Last time ya came, you were 395 pounds...” The scale took a few moments to measure up, but finally displayed the result. “...And now you're up to...465! You really have grown, eheh...”

“Of course, of course...” Maddy took out her measuring tape, extra long just for Riley, and proceeded to wraps it around her. “Woo, at this rate I'll need a new tape...and they don't make em much longer than this! Heheh...” She measured Riley legs first, and then worked her way up. Reaching Riley's door-busting posterior, she had to ask Riley to hold up her gut so to get a more accurate measurement. “You've gone from...92 inches, to 108!”

“Mmn,” smirked Riley. As the tape was removed, she let go of her gut, which slapped down against her thighs with a meaty “blop!”

Then her waist measurement. Maddy stretched the tape once more, around Riley's back and to the front, the two ends of the tape stopping at her belly button. “Last time you were 56 inches, and now you're...”

Riley walked out several hours later, in her brand new suit tailored to her new size. Waving bye to Maddy, she climbed back into her car, where one of the other family members was waiting to drive her. “Looking good, Riley.”

“look good?” she smirked. “Heheh, Oi don't just look good, I am the meaning of 'big beautiful woman!'” Her stomach growled again. “How about lunch then? Oi'm starvin'...”

Riley's stomach growled impatiently as she sat in the restaurant booth, awaiting the first of many courses for her dinner. He booth was oversized just for her, as she did not fit into the normal booths when empty, let alone once she'd begun eating. Chugging down a pint, she let out an impressive belch, and turned her head over to the waitress. “Mmmn....how 'bout another? Oi'm still runnin' empty.” The waitress nodded and went off to bring another few gallons of various wines...Riley didn't really care which ones, but they served the better ones to her regardless.

The shattering of glass and screaming on the waitress distracted Riley from her thoughts. Bullets rained into the structure, ending everyone diving for cover. One of the rival gangs, she was sure of it...one of the people was dialing the police, but Riley didn't care; in fact, they didn't mind her own family's presence due to their generally non-violent nature, particularly since they kept away the more violent gangs. And right now was the time to do just that.

Backed against the wall, she peeked out of the window, to get a look at what she was fighting. There were a good dozen of em...an MP5 or you, and small pistols for the rest. Her own pistol wasn't small, it was a cannon. “Desert Eagle, Point Five-O” as one movie put it. For most people, it was really for looks. Because it was so big and heavy, it was impractical to use and difficult to aim. Riley, however, was far stronger than others, and could handle it like a Colt .45. Across the room, one of her lieutenants peeked as well, before making sure her shotgun was loaded and ready.

“Your mine, bitch!” called out one of the gang members, spraying yet more 9mm bullets into the restaurant, and they approached further.

“Boy, you don't know how mistaken you are...” she sneered, shaking her head. Hearing him pause to reload, she leaned out and took several shots, hitting several of em right in the chest, before diving back in to avoid return fire. The one across the room leaned out, blasting both barrels into the ones who got close enough. “Nice work!”

There were only three remaining enemies now, and they were clearly faltering. “Oi told ye!” called out Riley. “It was a