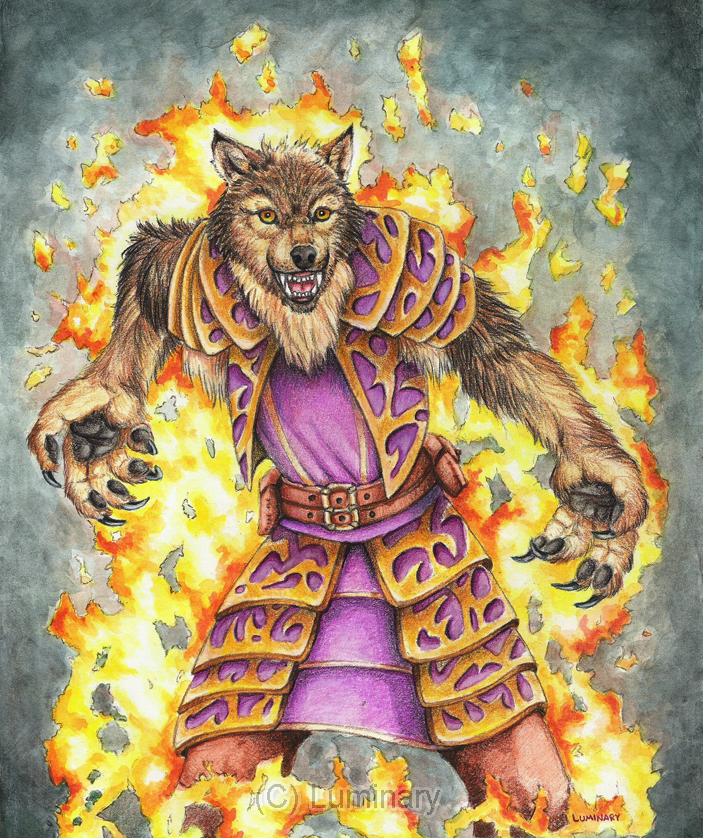 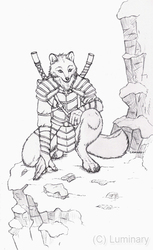 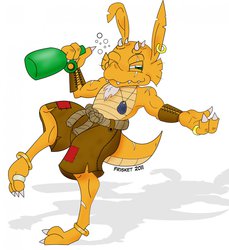 Luminary: Took one of my old sketches and decided to color it in for fun. I really enjoy playing role playing games. In a way this is also a thank you to Frisket who is the best Dungeon Master I've ever had. :) Watercolor and color pencil on bristol.

Drawing by Luminary. Story by Frisket.

The ground shook with the thunder of charging goblin warriors. Even from their safe vantage point high on the rocky slope, the party knew that they were well outnumbered. Galahan, the half-elf leader grimly watched as the army of goblins approached his small band, intent on wiping them from the face of their mountain. He gripped his longbow tightly, waiting for the creatures to come within range. Sister Garan hefted her mace and uttered a short prayer to Halya, asking for her goddess' guidance and protection, as if her plate armor wouldn't be enough. Brindle and Tuck, the twin thieves, loaded their crossbows with an air of detached amusement, joking as if they were off to a picnic. That left Brian the sorcerer fumbling with his reagents and stuttering the words of his spells.

With an annoyed look, Galahan glanced back at Briarthorn and huffed. "Alright, this is it," he said, hefting his bow and stringing an arrow. The twins were already sighting targets as they clambered up the mountain, and a familiar blue hammer appeared floating next to the battle-sister, awaiting her command to strike her foes. The half elf glared at the sorcerer. "You'd better get it right this time."

"You guys should stop fighting," Sister Garran grunted, sending her hammer floating down the mountainside, "we'll survive if we work together and don't just start--"

"HA! Pegged one in the nuts!" Tuck trumpeted, jumping up and doing an obscene victory dance. His brother Brindle grimaced until six crude arrows struck his brother's puffed-up chest, the thief twin collapsing to the ground with a choking death rattle. Sister Gallan groaned. "Seriously? Seriously. Brindle, you stupid bastard."

They braced for the wash of green tide that was to come. As they waited, the moonlight struck in its pale majesty, and Brian felt a strange compulsion to glance up at it. That compulsion soon turned into a full need, and he stared at the huge pale moon with the intensity one reserves for a treasure hoard. His body ached, especially the wound on his arm from the other night - he hadn't mentioned it yet to the party, but a strange white wolf had attacked him while he was getting firewood. He thought something was strange about the encounter, but had dismissed it until now.

Somewhere, Galahan was shouting and the goblin war cries were getting closer. But Brian didn't hear them. His teeth lengthened, his arms thickened, and the surge of bestial energy forcibly rent his sanity. Dark brown fur sprouted from his pale skin, and he howled at the Moon Mother for the first time, his cry echoing off the rocks.

"For serious!" shouted Galahan, "What the hell, Brian!" Arrows whizzed from his enchanted bow into the goblin hordes. Brian felt free.

"This is so awesome, you have to write this into your backstory!" shouted Garran as she hefted her mace, braining a goblin that climbed to close.

The surge of energy gave Brian a single thought that made his toothier maw grin wide. He raised his paws, arcane fire bursting around his form as he chanted the words to his spell, the mind of a sharp animal hunter giving him focus. Galahan tried to shout a warning, but the half-elf's cries were too late. Brian howled as he brought the flaming ball of arcane might down in their midst, as the goblins closed in.

The blast was deafening, and the roar of flames mingled with the werewolf's laughter.

"Dammit Brian! You burned off my eyebrows again!"