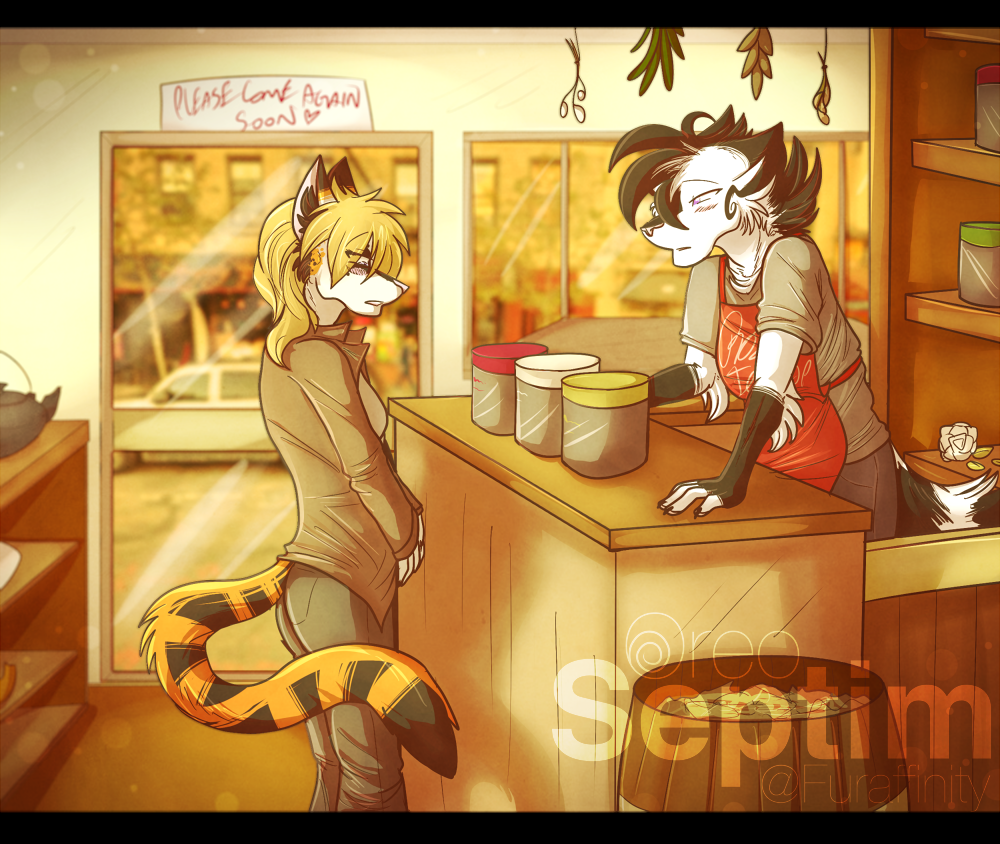 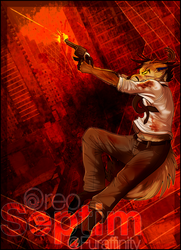 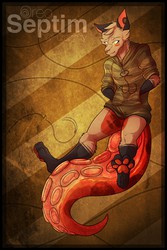 Frey gave Summer directions and soon she was out on the street looking for a “Rose’s Tea Shop”. The sun was beaming down but the shadows of the buildings and the general temperature of the air still kept things cold enough that Summer was glad to have her jacket. She tucked the tea tin further under her arm and picked up her pace, weaving between other walkers but still keeping a careful eye out for her destination. The concrete towers around her always made her feel so tiny, but she wouldn’t trade living in this city for the world. Caught up in her overwhelming surroundings, she almost missed the sign for the shop. It was made of stained, red wood and appeared to be hand painted with a decal of a beautiful pink rose underneath the name of the establishment. “Since 1984”, it read.

Summer walked inside without any hesitation and was glad to feel that the store was warm inside and smelled amazing; earthy fragrances danced around her inside of the draft she brought in as she entered and she breathed them in deep. Maybe she really would buy something while she was here—the smell of fresh tea leaves enticed her more than she would have thought. The shop was decorated in a rustic fashion, with shelves full of tea tins and tea-related tools like infusers and special pitchers. Along the right wall there were barrels that presumably had tea leaves in them, but Summer wondered if they were mostly for show. Predominately, the shop was a myriad of tawny and burgundy tones which created a warm and woodsy atmosphere that Summer was taken aback by her fondness for. A quick look around told her that there weren't many people in the shop besides her so she headed for the counter, seeing as she already knew what she needed.

But then she stopped dead in horror.

Behind the counter, in front of shelves with rows upon rows of differently flavored teas, a white feline with black markings was carefully measuring out some leaves and dried fruits.

“DAMN you, Frey!” Summer cursed inwardly as she ducked behind a shelf quickly before Oreo could potentially look up and see her. From where she was literally crouched behind the display, she peeked around once more just to confirm who she’d seen. As she watched, Oreo continued to measure out a blend of tea into a bag and then she sealed it just as a customer approached from the opposite end of the store to check out. She smiled and offered her hands to take their purchases and Summer marveled at the difference the smile made to the feline’s countenance. But then she realized that she probably looked like an absolute nut crouching on the floor and peering from the ground at the cashier and she straightened up and (quickly) moved further into the shop so that she was still out of view, but didn’t look as off her rocker as she had before.

“I should have expected this.” She fumed a little, but then questioned herself once again. What was the big deal, really? She would get the refill and go without a fuss—wouldn’t say a word extra-- and then it was a done deal and she could go back to the boutique and Frey would have lost whatever game she was playing with the two cats. And Summer could hit her. Maybe not hard, but... several times, perhaps. End of story.

And with that image of retaliation giving her heart, Summer turned and went straight to the counter to wait her turn in line.

Since there was only one person in front of her, it ended up being Summer’s turn a bit sooner than she expected, and she was still lacking confidence when Oreo turned her lavender gaze to her next customer; but to Summer’s surprise, she seemed completely unvexed.

“Hey there. Good to see you.” She greeted Summer.

“Oh, yeah! Hey! Ahaha…” Summer stammered a little and forgot what she was there for momentarily, but she remembered when Oreo continued to stare at her expectantly in silence.

“AH! Oh, sorry; um… Frey sent me to get her a refill.” Summer held up the tea tin like she was offering proof of her right to be in Oreo’s shop and Oreo took it from her with a surprisingly light touch.

“Mmh I always recognize Frey’s tin. She’s dropped it so many times it has unique dents and scratches all over it. Good thing they’re sturdy.” Oreo smiled a little at the resilient little tin and then turned away, obviously scanning the shelves behind the counter for something in particular. She found it after a few seconds and returned to where Summer was stood and set the large container of whatever brew Frey had sent for on the counter space between them. She screwed open the top of the container and from it emitted a burst of scent that, to Summer’s amazement, really did smell just like a cake.

“Wow! I… I didn’t really believe Frey when she said there was such a thing as birthday cake tea!” Summer exclaimed despite herself. Oreo chuckled.

“I learned the gist of it from a tea maker in The Village and then adjusted it to be more potent. It doesn’t taste like you’re drinking cake but the scent is still there; and the smell is enjoyable enough on its own to justify keeping the recipe.”

“Wait, you’re the brewmaster here? You invented all these teas?” Summer stared at Oreo in wonderment, completely impressed.

“Oh, no, no!” Oreo exclaimed with a pitchy, nervous laugh; looking embarrassed. “Just some of the newer brews. This shop has been around way longer than me-- most of the recipes are from my boss, JoJo. But…” She added with a self-conscious but proud look, “The few teas I’ve made have been really popular. JoJo says I’ll brew teas better than he ever did at this rate. And I am the primary brewmaster now; JoJo focuses on the ledgers and Anna works on public relations.”

“Wow. That’s really, really cool.” Summer was enamored by both what the cat was saying and her passion for it. After their last meeting Summer wouldn’t have expected Oreo to be interested in anything with such feeling. She watched the white cat carefully measure out and fill Frey’s tin with her tea quietly, lost in thought.

“I was wondering… maybe you could help me?” Summer asked tentatively. Oreo didn’t look away from what she was doing until she finished screwing the lid back onto both Frey’s tin and the master tin, but then she looked at Summer expectantly again.

“Well, to be honest, I’m more of a coffee drinker.” Summer admitted hesitantly and paused-- but Oreo showed no disdain, so she continued; “But I’ve been thinking I should drink something a little healthier. What would you recommend?”

“Well, depends on what flavors you like. Also depends on whether you’re trying to dodge the caffeine, or boost your metabolism, or get more antioxidants in your body… The list goes on.” Oreo responded, rather unhelpfully.

^ The above is an excerpt from a manuscript I've been writing centering around the canon story of how Oreo and Summer met/started dating. The story also includes characters like Frey, her aunt Clementine, Oreo's boss' Jojo and Annabelle, Oreo's foster father Niels, and more and also mentions my friends :candycanekoon and anubian_foxy at times. It's something I work on off and on (and have for a year or so now) so it's progress is slow and I dunno when or if it will ever be finished (I'm really bad at writing anyway so maybe that's for the best, lol).

BUT YEAH if you tl;dr'ed the top bit, basically this pic depicts the first time Summer and Oreo were ever alone together not long after first meeting. At this point in the story Frey was actively trying to set them up at every turn (so that's why Summer get's so angry when she see's Oreo at first).

I really don't like this drawing or my writing but I put a lot of work into the drawing and it seemed weird to post it with no context when I already had the whole scene written out, so :') sorry!

Hope you all enjoy!

art, character, and writing are (c) to me. You may not use or repost this artwork or writing without my express permission.

(the deep background photo is from Google street view!)