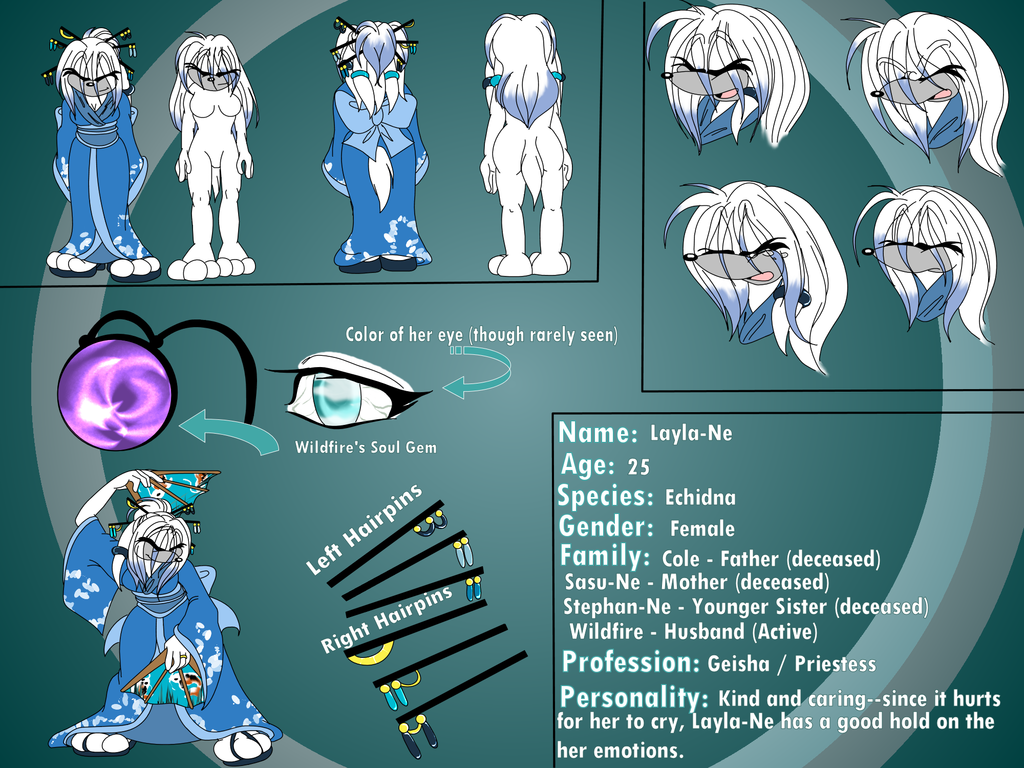 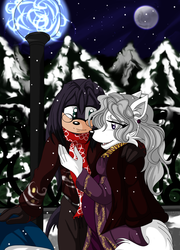 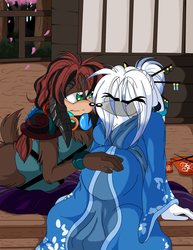 I told myself if I did another of these, it would be all too soon...haha. xD; Well, since Layla-Ne is all but a few simple colors, she was a bit easier than Freya-(Ca)'s. Since Wildfire is part of the Overlander group that are kind of as Moreta said--emotional vampires that feed off of their lover's love to remain healthy--Layla-Ne does have Wildfire's soul gem, but it's constantly hidden in her attire, so I rarely have a reason to show it. Same can be said about her eyes--Layla-Ne can open her eyes, but it hurts for her to do so as the poison that was taken to them has settled in and it burns when exposed it to any light source or her own tears (thus her rarely crying).

I almost went WoW and put (Killable) instead of (Active) next to Wildfire's name.. XD;; So tempting..

History: Layla-Ne was born and raised in the east, thus her fixation and love of the Eastern culture. She had worked as a performer under her mother regarding tea ceremonies and entertaining guests with either dancing or playing the shamisen. When she was only 15, her village was attacked by the Dark Egg Legion. Her mother burned alive to try and go back to retrieve Stephan-Ne (only 6) in their home while her father was beheaded for his defiance and eagerness to try and keep Layla-Ne alive (as well as himself, so he could take care of her). Layla-Ne was captured and was nearly in the process of given robotic enhancements via her eyes when Spectre attacked and freed the villagers with the nearby Freedom Fighters. Since the poison had already been taken to her eyes, Layla-Ne lost her sight for good.

Since her family was gone, and the anger and pain was too much to handle, she was taken back to the Floating Island to escape her past and where the priestesses took care of her and helped calm her anger by reading the tomes and focusing her more on the teachings of Aurora. While sadness and bitterness about that night still rumbles inside of her like a caged beast, her focus on such things is turned to dust when she meets Wildfire.

While scared of the fact he is a Dark Legionnaire (as she can hear the robotics when he moves), she realizes that he shouldn't be blamed for the violent act someone else had done years ago to her home and family. As time continues and they have their first child, Layla-Ne does marry him and accepts his soul gem.

Notes: I don't see Layla-Ne as an albino at all. I just see her as white since she has pigment in her hair and she has light-blue eyes and not red/pink eyes regardless of what the fandom states. It doesn't matter to me if people call her so, but I just see her as white. If anybody does art of her, I feel she's free to interpretation in design as it's always fun to see what people come up with. <3

(I see nothing mature about it as nothing is showing, but I can change the submission if people get wiggy xD)