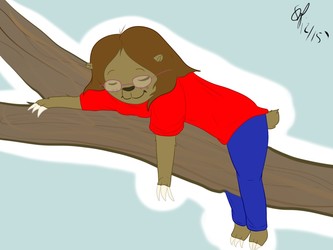 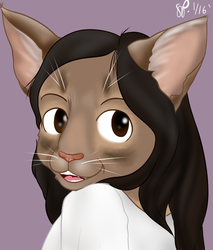 Here is a guide to the age range. :)
(Sarah Maotabby is based off me IRL, for the most part.)

Age 5:
-Extremely creative.
-Off in her own world a lot; Sometimes not very “with it”
-Rather clueless
-Always dragging around her teddy bear, Isabel.
-Clingy
-Loooooves Disney movies
-Kind of shy

Age 8:
-Short temper
-Not a lot of friends (...unless made-up characters count)
-Denies that she watches any “baby shows” (but actually does) >.>
-Tries to be a tomboy
-Actually sucks at sports (which gets her angry)
-Sore loser
-Not a sore winner though
-Pretty secretive (regarding drawings)

Age 11:
-Started 6th grade at a new school
-Too innocent for her own good
-”What does ‘being jumped’ mean?”
-Huge weeaboo (kawaii desu~) but denies it.
-Also is interested in Indian culture (at least what she’s seen from the few Bollywood movies she’s watched)
-In the middle of the “OMGZ SO RANDOM WAFFLEZ!!!” phase (ew)
-Pretty long hair (always got messed up, too lazy to brush)
-Tries to impress everybody
-Rather weary of upperclassmen
-Cries a lot

Age 14:
-On top of the middle school world (8th grade)
-Has her hair cut
-Grew out of the weeaboo phase (praise the Lord)
-Still tries to impress everybody
-A bit too sensitive sometimes
-Loves affection (play with my hair pls)
-Starting to mature a bit
-Realizes love for headbands
-Grades improved from the year before (and will only get better over time!)

Age 17:
-Kind of stressed (junior year problems)
-Loves drawing
-Not as much of a crybaby anymore
-Still has her teddy bear, Isabel (but only in her room)
-Stuffed animal collector
-Addicted to watching cringe videos
-B+ to A+ student (ohhh yeah honor roll)
-Animated movies and shows keep her more entertained than live action movies
-Loves her current friends and wouldn’t give them up for the world
-Indian and Latin American culture are life