The Education of Tiffany Songshi pt. 1 by numberxxxvi 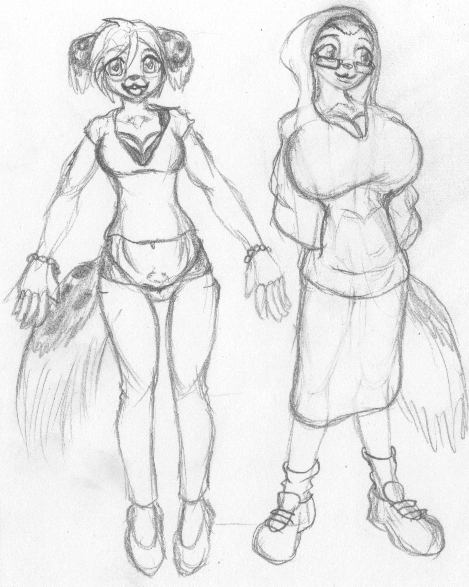 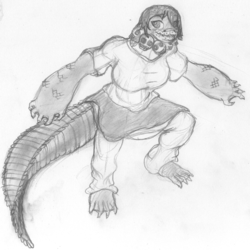 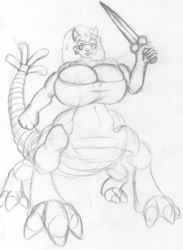 The Education of Tiffany Songshi pt. 1

Per the results of a recent journal, here's my dog girl Tiffany (who I realized I was mistakenly calling a chow chow- she's actually a mix of chow chow and other breeds) experiencing nerdification as a result of life at college- a "before" picture on the left, and an "after" on the right.

Tiffany always liked video games and scifi movies, but she was usually more concerned with maintaining her appearance: growing up in a household with a mom who makes her living showing off on camera left her with a sense that her looks were important. But when she started living on campus, she decided to check out the SciFi Club.

There, she met Nuha, the club president. The transgender dormouse anthro's breasts were obviously fake, but they were also bigger individually than Tiffany's whole body if she curled up. But contrary to expectations, Nuha wasn't an aspiring porn star or appearance-obsessed bimbo: she was the nerdiest girl Tiffany had ever met, with unkempt and matted curly hair, thick glasses, ill-fitting and poorly maintained clothes, and obsessions with computer hardware, miniatures strategy games, and obscure speculative fiction. All of this meant that Nuha not only got more attention in the club full of geeks than Tiffany, but also that she was much better at games. Yet a glimpse at Nuha's Facebook page showed that before colelge, she'd been even more stylish and traditionally popular than Tiffany ever was. Tiffany couldn't leave it at that, and after the third defeat in a -FPS, Tiffany stood up and demanded that Nuha tell her the secret of her brains and boobs.

Patiently, Nuha explained that she'd gone in for an experimental nanotechnological breast augmentation treatment that infused her breasts with self-replicating carbon nanotube-based machinery. There were two unexpected side effects: her breasts became nearly impervious to damage, and they turned Nuha into a living computer. Finding she loved the added brain power, Nuha sought further augmentation, to the point that she became smart enough to easily control the growth herself. As a matter of fact, she was now the preeminent expert in the procedure and related technology; her college studies were a matter of getting some use out of her earnings from grants and pursuing other interests.

Tiffany began to beg and plead that Nuha share some of this augmentation with her. She spent as much time as she could hanging out with the nerdy rodent, befriending her, seducing her, gaming with her, slipping under the table and deep-throating Nuha's hard girlcock beneath the heat of her hyper bosom, meeting up with her after classes... and spending less time on her own appearance because of how much time she spent on it. Her teachers noted an improvement in her homework: she began to obsessively research the nanotech and expand her knowledge, picking up details of biology, medicine, computing, and chemistry that she never would have cared about before. Finally, Nuha agreed that Tiffany seemed to understand the potential consequences well enough, and agreed to lead the augmentation procedure.

Within a few weeks, Tiffany had the breasts she dreamed of- and in those breasts, the computing power to make her the second biggest braniac in the SciFi club. She looked in the mirror, finding a lazily dressed bitch with enormous fake tits and hair tied up in a bun... and was pleased.

Now, you can vote on the next thing that will happen to her by leaving a comment on this picture with your choices. Votes that include details about why you want something to happen or how you think it will go down will count for a little more.

Options
(1): Rooming with Andromeda the hyper-clitted intsersex Mole = Tiffany becomes more masculinized from fooling around with 'Meda. Her clit will grow, she'll become hairier (dense body hair-like fur) and develop more masculine muscles.
(2): Dating Plus the hyper King Cheetah herm = Tiffany gets knocked up, becoming more and more extremely pregnant and busty each time, with increasingly milky tits.
(3): Taking art classes with Soraya the female Sand Cat = Tiffany grows a bigger pussy, with huge puffy lips that drip juices constantly when aroused and gushes floods of girlcum, along with starting to lactate. Stacks with 1 and/or 2 for added clit size or milk.
(4): Rooming with Casey the androgynous anthro Tofurkey = Tiffany becomes a BDSM slut, more submissive and restrained with each step.
(5): Captured by the hyper herm supervillain Princess Pumpkin = Tiffany becomes part plant, with fruit for tits, leaves, and so on.
(6): Self-defense classes with Allon the hyper-balled male Squirrel = Tiffany grows an oversized and overproductive pair of balls and a dick.
(7): Accidentally summoning Zizi, hyper-busty demon queen of boobie hugs = Breast expansion! Plain and simple... though the more she gets, the more of Zizi's innocent demonic influence sneaks in.
(8): Dating Neon the muscular hyper-herm Nudibunny = buffing up! Becomes more muscular very quickly....
(9): Bargaining with Tesora the Alligator girl for magic classes supplies = random hybridization to meet Tesora's need for materials! Tiffany grows an attribute of another species, of my choice. Could be horns, antlers, an udder, a spider abdomen for making web, bee bits for making honey.....
(10): Magical guardianship classes with Atalanta the female Dragon Turtle = Tiffany becomes a giantess! Not macro right away, but after a couple steps....
(11): SciFi Club with club faculty adviser Alodia the hyper-busty alien Xenomorph = Tiffany's body develops Giger-esque phallic traits- a huge phallic tongue, a more phallic-looking tail, an enlarged clit or dick (stacks with other clit/dick-related stuff)....
(12): Campus Safety Patrol with campus police officer Nergui the Velociratpor transman = super-pumped clit or dick, if she's grown one from something else (stacks with other clit/dick-related stuff).
(13): Chaos Magic classes with Dee the Jerboa woman = random strange mutation (tentacles, dicknipples, becomes a taur)
(14): Dating Rachel the hyper-busty Sheep girl = random body modification magic- something gets multiplied!
(15): Cooking Magic class with Genesis the hyper-busty Dimetrodon = weight gain from all that yummy food!
(16): SciFi Club meetings with Nuha the hyper-busty Dormouse transgirl = Busty Nerdification! Tiffany becomes more nerdy, but also gets bigger and bigger fake tits to store her new computer-assisted nanotech brainpower.