Lunchtime with Mom by NikkyVix 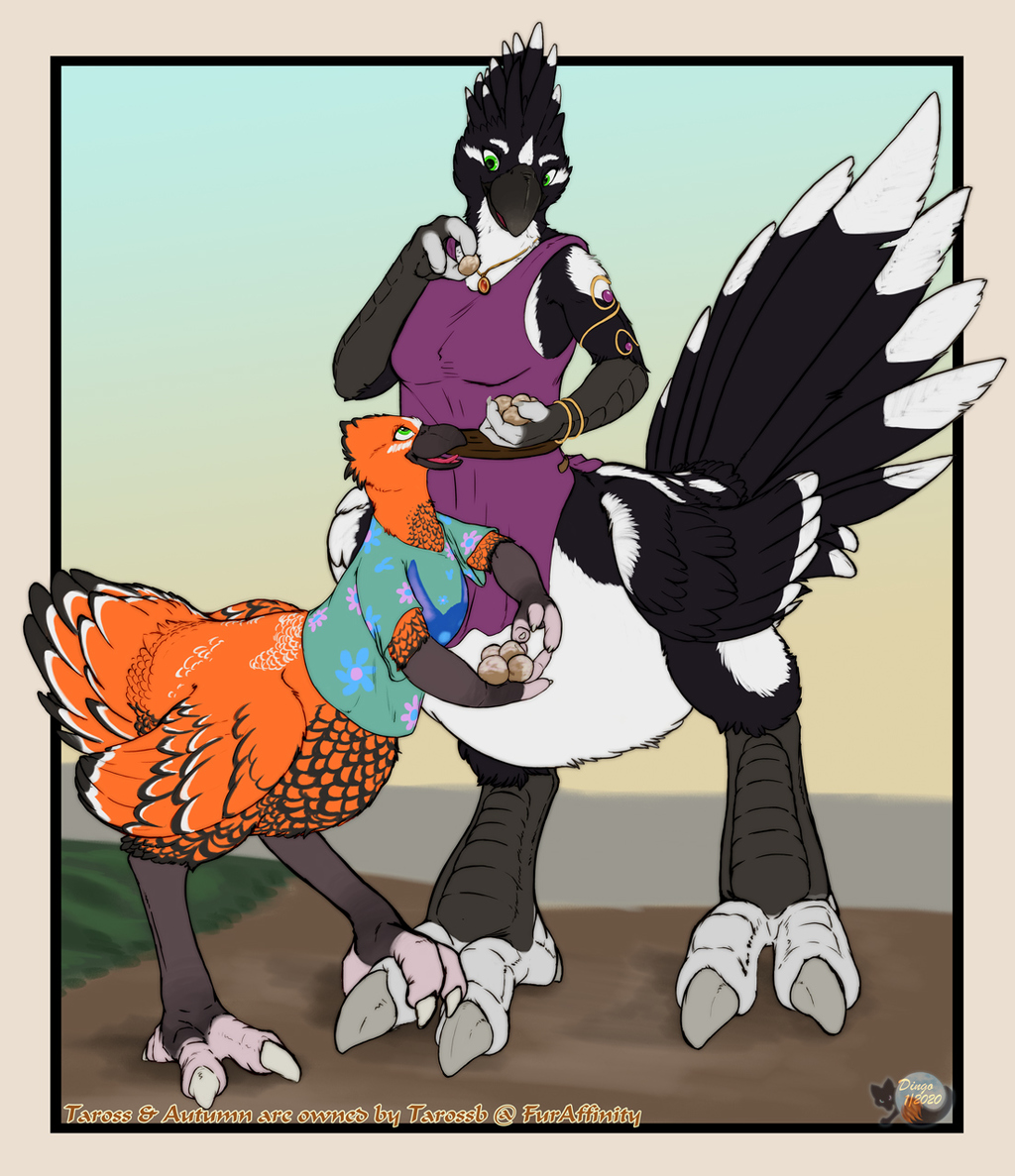 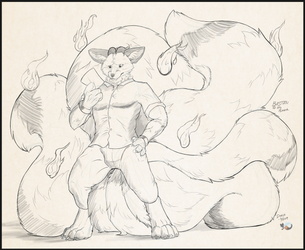 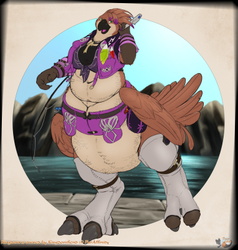 Autumn raced up towards her mother, pressing in against Taross' feathery bulk and partially sinking herself into the down, chirping and warking excitedly.

"Use your words Pumpkin, otherwise nobody else is going to understand you." Taross replied to the young chocobotaur and reached down to gently run hir fingers along the top of the others head.

Autumn pulled her head back a bit, huffing just a little before answering "Mooom..." Her first reply a reaction to being called by the nickname before she recomposed herself and pressed back in again "The others are saying we can watch the fireworks tonight?" she eventually asked, excitement still evident in her voice.

Taross chuckled a little bit and nodded, to which Autumn excitedly hopped in place. "But..." shi raised a finger, calling her back to attention "The same rule applies to you as to the others. If you can stay awake you can watch them." shi explained. Autumns head bobbed up and down in excited agreement.

"You will wake me up if I fall asleep, right?" she followed up a little later, slowly picking her words in that deliberate way of children trying to be absolutely clear.

Taross remained silent for a little while as shi considered the question. After all... Like the year before it was highly likely that pretty much all of the kids would be fast asleep before midnight; A combination of a day of excited anticipation and heavy fatty food usually contributed to all of them being thoroughly zonked out well beforehand. From the corner of hir eye, Taross suddenly spotted something that would definitely help hir avoid any commitments and possible disappointments.

"Do you know what your mom used to have when shi was growing up back home on newyears?" shi asked, leaning down a little so shi could capture Autumns attention a bit more by lowering hir volume.

The young taur immediately perked up, her previous question forgotten and her full attention on Taross. The latter continuing "They're called 'Dutch Donuts' and I just spotted a whole plate of them on the table..." shi gestured, pointing towards a serving platter that held a small pile of fried balls of dough, still clearly warm and dusted liberally with powdered sugar. "Why don't you go get you and me some before anyone else can get to them?"

With that, Autumn immediately and excitedly hurried off to go collect the treat Taross pointed out. It didn't take long for her to return with two hands full of them, leaning up against Taross again, placing one of her feet up on one of her mom's much, much bigger toes and leaned in to hand them over. "Here they are mom!" she declared proudly showing pretty much /all/ of the platters content.

Taross blinked, and then chortled a little -even a small kweh escaping hir when shi did. Some things still managed to get hir by surprise and one of them being the small disconnect between how large shi remembered certain things to be and how /small/ they eventually ended up being whenever shi was in a form like hir current draught chocobo-taur appearance.

While normally almost fist-sized to hir standard form, these treats were now just large enough to be popped into hir beak in a single bite.

Still amused, shi handed a few of them back to Autumn and raised one between two fingers, "Don't swallow them in one go, dear, or you won't be able to taste it." shi said, carefully snipping the one in half with hir beak. Autumn waited a moment longer before digging in herself, chirping happily again once she tasted the sugar and the fried, sweetened dough. Together, they polished off the entire platter haul in relative silence.

'Sure...' thought Taross as shi looked down. 'She's going to be literally running circles around her siblings from the sugar for a little bit. But she'll definitely be out like a log tonight. And I never did promise to wake her up.'

Little moments like these can be quirky or a trial in the moment, but are oh so worth holding on to! Stream commish for Taross of time spent with hir perky draught chocobotaur daughter, Autumn, and introducing the young chick to the same special treats shi enjoyed when shi was hir age (if perhaps not hir shape).