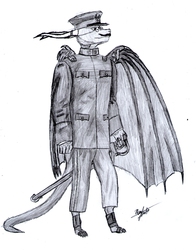 The Downfall of the Artica Dominion Allowed the union of terranova access to the exploited Forests of the Dark Wood. There, Infantry men and Naturalists Met several Tribes of lost Avin in several states of alarm.

Turns out that the dominion had been progressively pushing their frontiers backwards torwards the swamps - Effectively condemmning them to a slow death.

The infantrymen offered their help, and the medicians helped the sick tribe members. This earned them a huge reputation on the area, allowing for a smooth integration into Terranovan United Society.