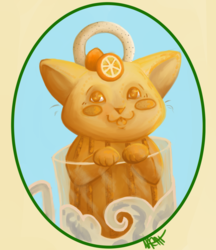 My own personal OC that is very near and dear. It's more of a kinship with her than just another character I draw. I use to have dreams of two different wolves, one black and one white. They have over the many years become like animal guides to me. I decided a while back to morph them into one being since I couldn't decide which I liked drawing more. Changed some things, such as long snow leopard like tail and an extra set a legs. Sort of like a Siamese twins. Also, black wolf is male and white is female.

Just a simple ref for Nacht. Really needed one instead of just my little sketches. The anthro on the end that is both black and white is Nacht's herm form. Adult ref makes that more obvious lol. Build of herm form can be more towards the female side or more towards the male side.