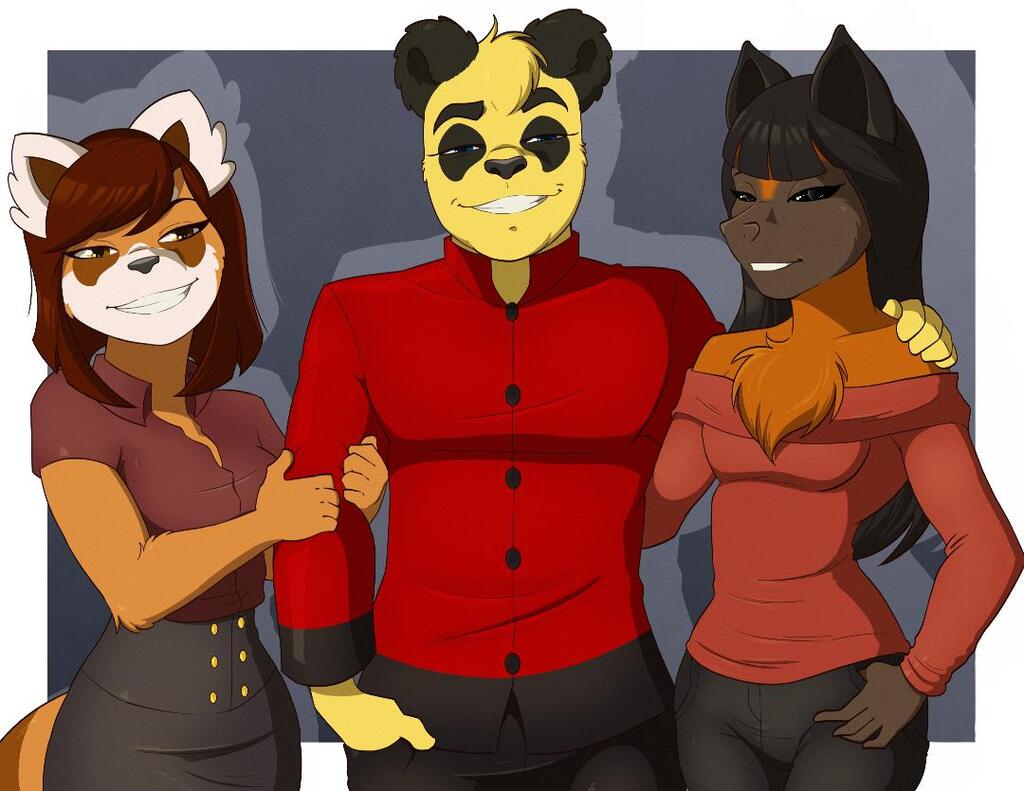 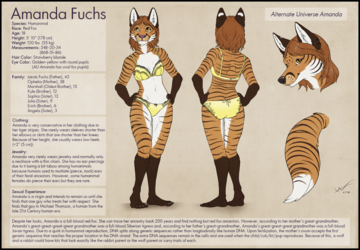 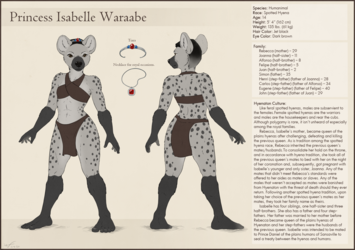 I recently decided to have a family portrait done of the Panda family that Michael and Amanda meet in Jaguarville. Here is Jinse (center), his wife Diane (our left), and their adopted daughter Mei (our right).

Jinse is a golden panda. He is 36 years old. He is golden-yellow where most "giant" pandas are white. His color is a result of a genetic defect which turned his fur the colors you see here. He was born in Seachuan Province in central Chowna. He emigrated to the United Provinces of Amurica when he was 16 years old and, after graduating from college, opened his Chownese Restaurant in Jaguarville, Flamingo. Because of his unique colors, he named the restaurant after himself, "The Golden Panda".

Diane is a red panda. She s 36 years old, too. She was born in Jaguarville the most recent of her family who have lived in the UPA for over 100 years. She speaks perfect Anglerfish having never had a need to learn Chownese. After meeting Jinse, she decided to teach him to speak proper Anglerfish as he was teaching her to read and speak Chownese. However after Jinse learned to speak without his accent, he couldn't get anyone to visit his restaurant more than once. Later, he and Diane decided that he should speak with an slight, but noticable accent. As a result of this decision, business picked up at his restaurant to the point that they are now living quite well.

Mei is a flying fox. She is 18 years old. Like all Humanimal bat races, she is wingless but her fingers are about 50% longer than would be normal for a non-bat Humanimal. She was placed in an orphanage after she was born out-of-wedlock which is something the bat races abhor; however, they abhor abortion more than out-of-wedlock children. When she was five years old, Jinse and Mei visited her orphanage and immediately fell in love with this little girl and decided to adopt her. Unlike most Humanimals, Mei has no obvious white to her eyes. This has been explained as being a heritage trait that is only seen in about 1 in 50 million Humanimals, although in bats it's closer to 1 in 10 million. She is currently engaged to a Caspian tiger (Anthony Palang) who is going to college under their ROTC program and he is learning CIT.

This drawing was a commission done for me by Brittany Shepard (http://www.furaffinity.net/user/evonallure/). Brittany also does a wonderful web comic called "Evon".