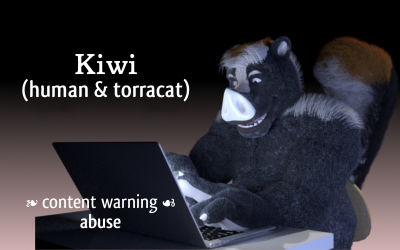 There’s a spot alongside the creek that goes by the library. It’s off the walking path so there’s not a lot of people passing through, and I’m in the habit of going down to watch the water when the everyday stresses of the office get to be too much.

It’s calming to listen to the rishrush of the water as it flows past the stones that stick up from the surface.

Today I was watching the stream flow and letting it take my boss’s snark with it, every little sharp word that’d been raising my hackles over the course of the day.

Today, there was a bulging sack that came floating around the bend. Now, trash is an unfortunate commonplace in a suburban waterway; usually I just ignore it, letting it go by.

But today, this big cloth sack ran aground right where I was sitting.

Nothin’ like havin’ to pick up litter. I sighed and reached for the bag, hoping it wasn’t full of needles or anything.

Instead, I found it wriggling.

I took a step back. The sack wasn’t big enough for a person—it might’ve held twenty pounds of potatoes—so I must have been dealing with a wild animal.

But the call for ‘help!’ that came from inside the bag was no animal’s whine—nor was it the sort of cry you’d expect from the kind of human small enough to fit in a twenty-pound sack.

He wouldn’t stop flailing as I tried to open the sack, and when I pulled off the tie that held it shut he flopped out into the creek before I could extricate him more gracefully.

He jumped out from water to waterside with a yelp, and I finally got a good look at him.

The creature I’d rescued from the sack was apparently a cartoon cat.

Not a toy cat. An actual cartoon, a couple of feet tall, drawn on reality somehow in black and red more vivid than life, with a little gold bell on its neck.

He startled again as soon as he saw me, but he was between me and the water and couldn’t escape without getting past me.

“Human…please don’t make me go back.”

I would’ve thought I was being pranked, but I didn’t know any way to fake this.

The cat looked up at me, confused. “I thought humans knew about cartoons?”

“You’ve seen us on TV and don’t believe in us? Then what do you believe?”

“I thought you were just…drawings? Like, an artist sits down and draws every frame of an animation?”

“Yeah. Right. Hundreds of thousands of detailed colored drawings like me on a regular basis. Have you ever known artists to work that fast?”

I thought about some commissions I had waiting from artists that certainly did not have hundreds of thousands of drawings in queue.

“Exactly,” he went on. “Usually they just take video. But I’m sick of that life. I don’t want to go back. So I escaped.”

Something in the cat’s expression seemed off, and I realized I might yet be being bamboozled. “You escaped… Tossed in the river. Tied in a sack. From the outside.”

The cat sank to his hands and knees, so to speak, grabbing my ankles and wailing out. “Please don’t make me go baaaack!”

I didn’t know what to do for the little scoundrel, but it didn’t seem right just to leave him there; what if whoever he was escaping from found him? Nobody should be enslaved against their will, not even weird cartoon people.

He scrambled up my body, giving me a huge kiss and scrambling down the front of my shirt. The touch of him was strange—not exactly the smoothness his lines suggested, nor the furriness those lines represented—the closest I can say is that it was like a fluidity given form.

“All right,” I said, though I realized this was definitely not going to be a good idea. “Um, and who exactly am I keeping you hidden from?”

So, like police, I thought. “C’mon, I need to get back to work. You should be safe at the office.”

I was lucky it was near the end of the day; Kiwi, as the cat was called, had an insatiable curiosity for everything in my cubicle, alternately sniffing at and asking about everything from my stapler to the Bowser poster I had up beside my monitor.

Somehow the trip home was uneventful. I half expected a squadron of ‘patrols’ when I left the office, but nobody came; I wondered if it were another lie of Kiwi’s to hide what he was really running from.

“Thank you,” he said, as I told him to make himself at home and started putting dinner together. “I wouldn’t have had anyplace to go without you. I…don’t know how I can pay you back, though…”

“Don’t worry about it,” I said, putting a pot of water on to boil. “I shouldn’t have any trouble supporting you here, and I could do with the company. Anyway, I’ve kind of been wanting a pet——”

The cat interrupted me with a growl, brow furrowed. “You’re not thinking of me as some dumb animal, are you? I’m not anyone’s pet!”

“Oh, of course, sorry,” I said, pouring my last box of macaroni into the pot and writing ‘pasta’ on the little dry-erase board on the fridge I used for my shopping list. “My mistake.”

“Just trying to apologize, Kiwi, I didn’t mean to assume——”

The cat scrambled up the refrigerator and grabbed the marker before hopping back on the table, where he began experimentally drawing on the end of his tail.

“I don’t think you can—” I started, before I noticed that he was indeed making marks in the air that extended from his tailtip.

By the time he’d finished, he’d drawn about a five-inch extension to his tail, and I watched as his reddish color flowed in to fill out the outline.

“You bet it is! I can use this to hide! Let me just go and change myself a bit!”

He ran off down the hallway and shut himself in the bathroom.

I’d finished making dinner and was halfway through eating it when Kiwi came back into the kitchen.

At least, it must have been Kiwi, since nobody else had come in the house. But the cat I’d brought home had just been your basic housecat; the only thing the toon in my doorway had in common with him was a touch of his red color left as stripes in his fur.

Kiwi had come back as a massive black tiger. Standing on two legs, taller even than me, and built like he never wanted me to give Bowser a second glance again.

He tossed the marker on the table. “I would’ve gone bigger but it ran out of ink.”

“I wanted to pay you back, you know?”

“I mean…if you’re going to take me in like this, the least I can do is give you a good performance.”

The cat was too caught up in his gesture to even think about letting me finish a sentence; he just took my hand and led me back towards to my bedroom.

He lay me on the bed and I looked up at him. Did he really have in mind what I thought he did? He was a cartoon character. He hadn’t even drawn himself the equipment…

…but to be honest, the big hulk didn’t need anything between his legs to get my motor running.

“Kiwi…what kind of performance did you have in mind?”

He looked down at me with a fierce grin and pounced, enfolding me in the strong arms he’d given himself. “I’m gonna make love to you.”

Instead, I lay there pressed against his chest, breathing in the scent of him—vaguely reminiscent of the original marker—and a pure and powerful emotion started flowing into me.

I wasn’t ready for it.

I’d thought I’d felt love before. Yeah, that’s a hokey thing to say. But the love I knew was as flat as a drawing on paper compared to the depth emanating from the big cartoon tiger.

There’s a love that comes when you can do someone a kindness—that love was there, and most powerful. There was also that love you feel when a kindness is done to you.

I felt loved in the arms of the one I’d sheltered.

There was a love that comes from watching someone grow—whether a partner, a friend, or one’s own child, just seeing them and how far they’ve come alongside you.

It was a strange love in the arms of the one I’d sheltered, but I drank it in like a sweet intoxication.

There was the love that steamrolls you when you have a deep crush on someone—and that impossibly rare and precious love that comes from finding they feel the same about you.

I felt this love radiating from Kiwi, layered on all the others. It didn’t make sense, but love is blind and lets us overlook many kinds of wrongness.

There was a love that comes to the heart of those who are being hurt by someone dear. A love borne out of a desperate hope that maybe, just maybe, since it’s not supposed to be like this, that it’s not going to stay like this. And when they do stop hurting you, you’ll need to have that love handy, because then it can make things good again. Or at least keep them from going bad again. Or at least hold off the relapse one more day. Maybe. Just maybe.

I felt this love coming from Kiwi, the strongest love he had, fearful and frightful, and I had to ask him to stop so I could rub the tears from my eyes.

“I’m sorry,” he said, hiding his face and trying to curl up in a corner of the bed, a gesture that didn’t comport well with his new build. “I was doing it wrong, wasn’t I?”

I put a hand on his back and stroked him softly. “Shh, it’s okay,” I said, as reassuringly as I could. “But, if you want to talk about what you’re really running away from…”

I didn’t make him talk.

We lay on the bed, with me holding him, until he had recovered his composure. Making himself bigger wasn’t going to be what took that pain away—it was going to take time. And even though I’d just met him, I knew I couldn’t deny him that.

Still, the next day, I went out and bought a big box of markers. 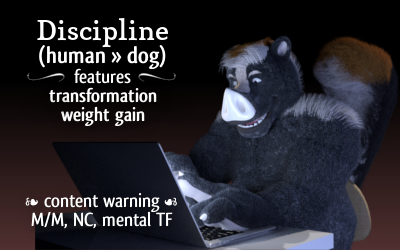 A human finds love in the arms of a runaway cartoon character. But what was he really running away from?

All patrons get to read stories early. Want to ask for more of something you liked? Check out my Patreon!
https://www.patreon.com/muskwalker
Or buy me a coffee as thanks if you just liked this one:
https://ko-fi.com/muskwalker