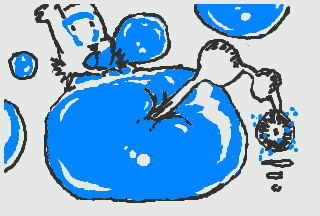 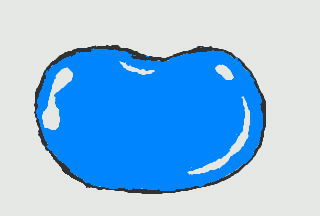 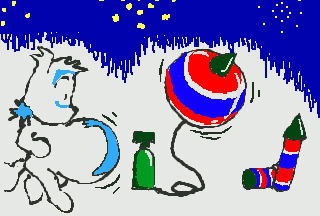 If you don't really see what's going on here, I provided a fun little story below.

One day, I was taking my normal walk on the outskirts of a city (somewhat in an open field of grass), when all of a sudden, a sphere (that appeared to be some kind of black hole, or a portal to another universe), appeared out of thin air! I walked closer to the mysterious sphere in awh, and wonder. I even wanted to stick my left hand into it, but I stopped as a hose extended out of the sphere. wait... ...a hose? yep, a hose.

It slowly rises out of the black hole, and then darts straight at me! I had no time to react as I was hypnotized in wonder and curiosity. Soon I realize that the hose plugged itself into my belly button! Then, the hose begins to bulge and stretch as it begins pumping something into me. I was nervous about what will hit me, or what this stuff might even be; but when the first bulge traveled into me, I felt relaxation.

It felt like the most pleasurable feeling just bolted through my belly, and to my fingers & toes. I began to lose my cares as time felt like it was slowing down. Then, the second bulge squeezed in. But this time, I felt a strange sensation... I couldn't feel my stomach. That was become my belly turned into a bubble!

I fumbled around with the hose, seeing if I could detach the hose, but I had no luck in removing it as it continued pumping into me. With every bulge that pressed into me, the more I felt squishy, rubbery, and slippery. My bubble belly began to grow bigger by the second.

Soon, I start to lose feeling in my arms, legs, and tail. I look over to discover that my limbs have disappeared into my bubble body, as they became part of it as well! I was left with nothing to move around in, except the fact that I could barley bounce around to the rhythm of the hose, filling me with the possibly never-ending content.

then, a relaxing feeling came over me, as bubbles began to form out of my mouth. With every bubble that came out, was the size that I was growing with each bulge. I decided to continue enjoying the wonderful experience; sitting there, bubbling larger and larger, squeaking to the slightest movement, spewing more and more bubbles as they become larger, bouncing with the feeling of rubber, and stretching with every bulge of the mysterious hose from the black hole.