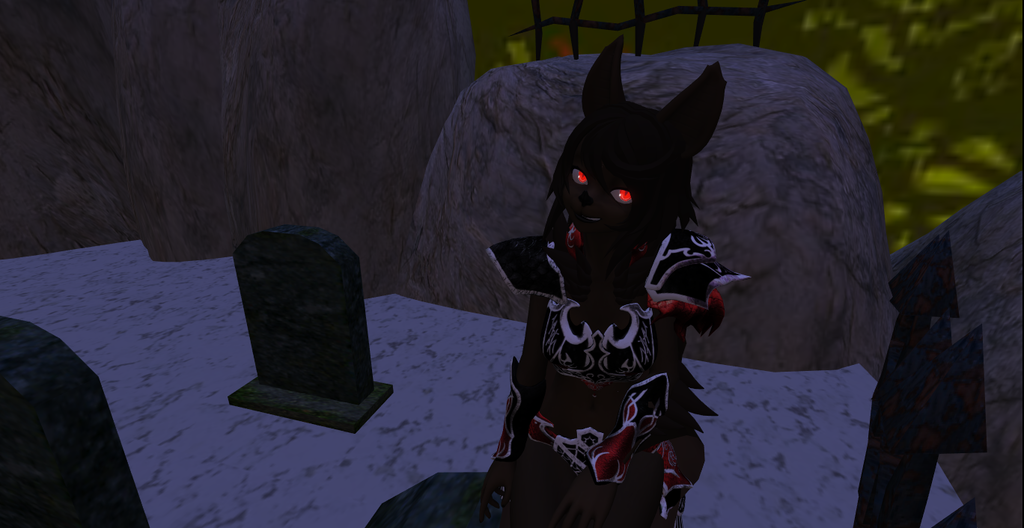 This is my first Vampire character. She's a bat who is apart of the Blackwater Order. I'm going to attach a file explaining that order and how the Vampires and Thralls work in tandem with it. It's a bit more like Skyrim's take on Vampires and Thralls, but NOT EXACTLY.

For Moll herself, she's quite cocky and arrogant. She speaks in a bit of a flirty tone, but her only interest in luring in Thrall in service of her Queen. Around fellow Vampires (when off duty) she's playful and can tell a few good jokes, but on duty, she can be quite serious and deadly.

Her weapon of choice appears to be her claws which elongate during combat. In the daylight she wears a blindfold over her eyes to not damage them. Being a bat, she's easily able to guide herself without needing to use her eyes.

The Blackwater Order are a syndicate of Vampires that consists entirely of female members. They have thralls that range from male to female, yet all the vampires are chosen to be female. This comes from the notion that females make more efficient hunters as they are better able to provide for their young.
It is also understood that males are often stronger and make better Thralls, which the Vampires may use to strongarm villagers and weaker persons and turn them into foodstock or more Thralls to serve their masters.
Each Vampire is allowed up to three Thralls, whereas Generals are allowed up to ten at a time, though it's often better to keep at least five with you and five three vampires in order to properly feast upon or fight a foe. The Queen Vampire is allowed as many as she pleases.
The vampire gene is NEVER transfered unless ordered to by the Queen or the Generals. It can only be transfered to females in order to keep the purity of the Order.

About Thralls
Thralls are under the control of whichever Vampire bit them and drained enough blood to put them under the spell. A Thrall will still keep their personality, mannerisms and general manner of behavior, however they have an entirely new goal that is above any other priority: Satisfying their Mistress. This means making sure their Vampire Mistress is taken care of, has eaten. Whatever she wants them to do, they will do.
This also means that whatever is important to the Thrall takes a backseat to these wants and desires. If the Thrall was originally very family oriented, he/she would no longer be as concerned about his/her wife, kids, husband, etc and more focused on what the Vampire would want.
A Thrall will also often offer themselves if the Vampire is very hungry. Their own life is deemed meaningless if their Vampire is dead or starving.
If a Thrall refuses to hurt their friends or family despite being ordered, it will be excused depending on the situation. If the Thrall refuses orders three or more times, the Thrall will be deemed as faulty and would then need to be destroyed and a new Thrall found.
(If you want to be a Thrall, PLEASE keep this in mind.)
Important: Thralls are not used for sex. The Vampires may occasionally toy with a man they find, but it's unlikely they will take them in for sexual purposes. General Moll seeks out servants and meat shields, not dildos.

About Vampires
As previously stated the Vampires are all female. They work somewhat similarly to how they do in Skyrim, at least in terms of feeding and sunlight. Being exposed to sunlight does not kill a Vampire immediately, however it does severely weaken her, dizzy her, and increase her hunger exponentially. This is the best time to kill a Vampire, but also the most dangerous time because a hungry Vampire is much more deadly. It is unlikely she will be outside in broad daylight without a few Thralls by her side. When a Vampire bites someone, it does not always transfer the gene. That must first be mandated, and only specific Vampires CAN transfer the gene. Generals and Queens are the most prominent for being able to pass it on. Vampires that do not have a status in the syndicate are not able to pass the gene, but are still able to feed.
Garlic DOES NOT WORK on Vampires. This urban legend began when a Vampire was killed by a man who smelled strongly of garlic. Eventually the tale was so twisted that people began to believe that garlic was necessary in the killing of Vampires. If you show garlic to a Vampire, she will laugh at you.
There are several ways to kill a Vampire. You can lure her into the daylight and trap her somewhere, letting her slowly wither and starve to death. You may stab her through, or cut her in two. Severing the head is also a good way to kill a Vampire. Currently the most prominent method is driving a wooden stake through the Vampire's heart, but usually in daylight when she is weakened and her Thralls have been conquered.
The Vampires have been known to keep pets, such as Werewolves, Gargoyles, Imps, Hell Hounds, etc. They are good company as well as protection.

About Livestock
Many Thralls who are deemed either useless or would not serve any real purpose other than to be food are locked up in cells under the Blackwater Keep and harvested for blood. Many are killed and their blood siphoned out of them to serve as drinks to the other Vampires, while others remain in cells and wait to be fed upon. These Thralls are kept in a trance and don't seem to have a good idea of what's going on.