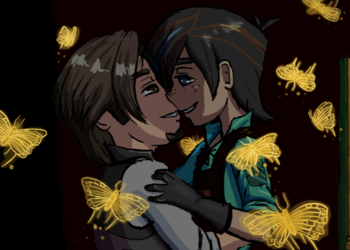 I finally decided to watch a few episodes of Tangled and I found that Eugene is terrible at math. Really terrible. At least with non-linear equations. Who better than Varian to come to the rescue? Since he's an alchemist and a very smart kid, I can guarantee you he's great at math. :D

Finally, a non-shippy pic of them that I drew on a whim. Okay, I drew this because I had nothing better to do at McDonald's and since the employees were watching me, I couldn't just ship them willy-nilly. XD.

Actually, I think it looks a little shippy. Varian kinda looks like he's flirting with Eugene. Or maybe that's just because I drew about fifty million pictures of them. Baaah. Enjoy the picture.