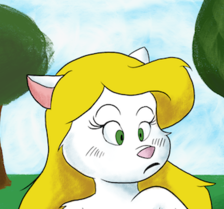 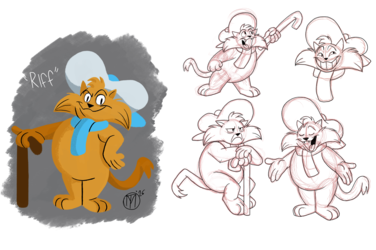 So today, I thought I’d try a fun little exercise and take a cartoon from the 1980′s and redesign the characters. I chose the Catillac Cats from “Heathcliff and the Catillac Cats” A show that has the potential to be good, but was a victim of early 1980′s cartoon making. The characters lacked personality and most of their “traits” were basically TROPES. So I thought I’d have some fun and play with some of the characters personalities along with their designs.

Riff, Cleo, and Mungo are still the same, while Hector and Wordsworth received a major overhaul.

Let’s start with Hector, in the show he was said to be Riff’s right-hand man who thought he should be the leader. We never saw that at all! So, I would imagine he’d be more of the “sceptic” of the group. Constantly trying to put logic into Riff’s crazy ideas and constantly being shut down.

and then there’s Wordsworth…. HOO BOY! Now this design choice was based on a crazy misconception I had as a child. Whenever I’d flip the channel and see the Catillac Cats, I would always assume that Wordsworth was a girl. It wouldn’t be until my young adult years that I would soon realize that the show runners were trying to tell the audience something that would get them in hot water by the FCC. So I decided to just let him come out and as an added bonus, I’d give him Cleo’s trademark legwarmers just for kicks.

But yeah, this was how I spent my Wednesday.