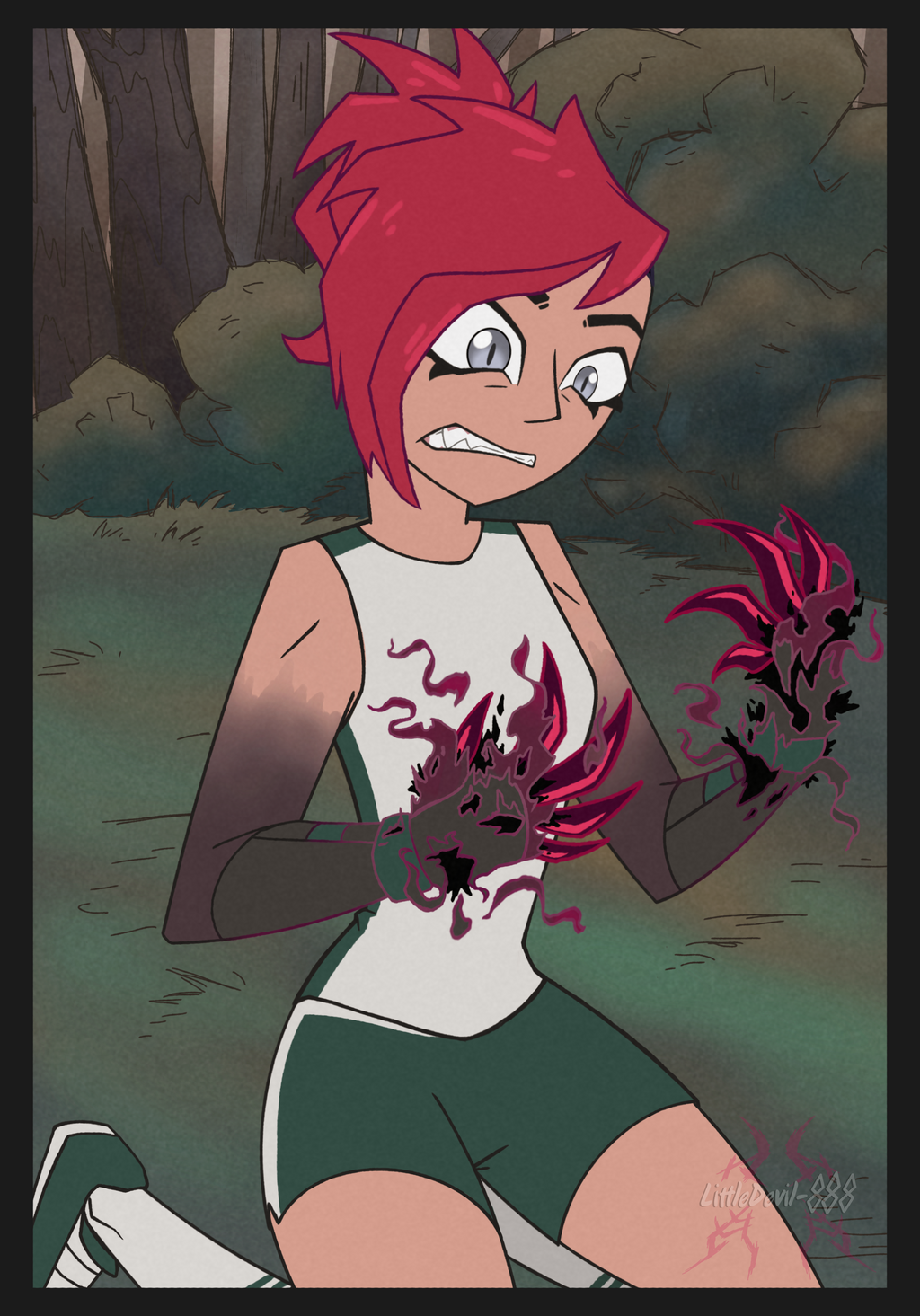 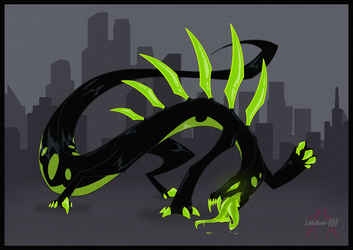 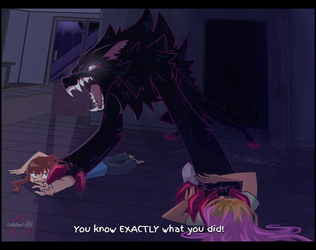 Jacqueline shoots the ball to a teammate.

Beck goes for another kick, this time to her side. Jacqueline weaves under the high kick and SLAMS her heel against his weak leg, kicking it out from under him in one swift blow.

He hits the ground hard.

JACQUELINE
(panting; laughing)
Holy crap! I can't believe I did that.

Beck forces himself up with a snort. Dustin walks up to them, laughing.

DUSTIN
(to Beck)
Wow! You let someone half a foot shorter than you put you in the d-dirt? Bet that's embarrassing.

BECK
Shut up, you smart-mouthed little-

JACQUELINE
(rolling eyes)
—Calm down. It’s part of the game.

Beck turns his attention to Jacqueline. Harley approaches in the background.

BECK
How did you get so fast just over the summer? Is DADDY giving you special lessons? Pushing a waste like you above everyone else, tch! Typical.

Taken aback, Jacqueline's sarcastic demeanor falters. She uncrosses her arms and stomps forward. Her fingertips darken to a deep purple-grey.

JACQUELINE
(fuming)
What the f-

Harley steps between Beck and Jacqueline.

HARLEY
—Hey! Ok, this is getting a little heated, yeah? How about we walk away before anyone gets hurt?
(to Jacqueline; voice low)
It's not worth it.

Jacqueline looks from Beck to Harley, contemplating. His pleading eyes break her. She yields. Closing her eyes and crossing her arms, she walks away, Harley and Dustin close behind.

BECK
Act as noble as you want trailer trash! We all know you only hang around her to get a piece of daddy's money.

Harley winces at the comment but remains silent. Jacqueline stops. Her fingertips begin to tear apart, revealing the tips of her underdeveloped claws starting to form under her skin. Dustin looks back and forth with concern.

HARLEY
Let's just go, please. PE is almost over. Let’s get inside, take a break.

BECK
Everyone here works their asses off, yet YOU get the easy road! Oh, but that's right, you're too good to join the UEA! You'd rather sit back and watch people die!

Jacqueline jumps at Beck, SWIPING at his face. The tiny burning tip of her pseudo claw scratching his cheek.

Beck grabs her arm, SLAMMING her to the ground. The wind knocked out of her.

FWEET! FWEET! Mr. Dice pauses the game and runs over.

MR. DICE
Fosston! Step away NOW! All of you get back!

Beck puts his hands up defensively, cockily stepping away with a smile. Dustin and Harley take a step back reluctantly. Shaking, Jacqueline pulls herself up, but...

Her hands are dark and discolored, full progress obscured by the wrist guards up her forearms. It dawns on her as the pain surges through her system… She's shifting.

Panicked, she pulls her arms close, attempting to cover her hands.

Mr. Dice blinks in surprise. Some students snicker at the outburst.

MR. DICE
Alright, that's all for today.
(pointing his pen at Beck)
YOU, get out of here.

Beck simply glares at the trio before sauntering away.

MR. DICE
Are you going to be ok for-?

JACQUELINE
—I told you, I'm fine!

He nods to Dustin and Harley before turning to leave the field.

Pained, she holds her trembling hands out in front of herself. The darkened skin slowly creeping up past her biceps. Her fingers entirely shredded apart, claws further developing. Black smokey fur beginning to flare up under the rips and tears.

JACQUELINE
It hurts… I can't stop it!

Dustin eyes her claws, taking a few steps back.

Harley puts an arm around her, pulling her toward the school.

HARLEY
Come on. We gotta move her!

DUSTIN
Move her? Move her where!?

Unintentional shifting is never fun is it Jacqueline? This is a scene from Wolf Of Penumbra. You can read that here ---> https://www.deviantart.com/littledevil-888/art/Wolf-Of-Penumbra-S1-Ep1-literature-802918761

Ah, this was defiantly a challenge as it plays on all my weaknesses! Human character, facial expressions, and backgrounds... BUT I think it turned out pretty damn good. I'd defiantly like to improve backgrounds though. I also want to draw more little scenes like this. I already have a sketch of a scene from Ep5 but I don't know when I'll finish it.