The Cave, the Devil, and the Gods by LavaBat (critique requested)

I had found a devil-creator. Well, the body of one. I’d never seen a dead body before, let alone a mummified one. I found the creature’s body in a cave, after I sought shelter from a sudden sand storm. I smelled the air. The scents were old and the air was stale. That was a good sign. No chance of nightstalkers or any other unpleasant surprises. Or so I thought.

Sorry. I should introduce myself. My name is Martzel Fartide. I’m a Khet. You’re kind often liken us to ‘rabbit like kangaroos.’ I don’t know what those people are like, but if there are anything like us, then they are tall, slender, tribal people. ‘Primitives’ as your kind call us.

Any way… back to the cave. I had planned to stay at the mouth of the cave until the sand storm passed. But it became stronger and I was forced deeper into the cave. As the day dragged on I grew bored and started to explore the cave. There was only one passage way, and as I carefully made my way deeper I felt the cave floor become smoother. I looked down. The floor was polished! As my eyes adjusted to the darkness I noticed a large, ornately carved altar at the cave’s end. Behind it was a word-wall, covered in the script of the devil- creator long forgotten language.

The body lay on top of the alter. It was a large and powerfully built. The bandages that once wrapped the body were scattered all around. Grave robbers seemed to have visited in times gone by. It’s skull was bare, and it’s body was covered in long, silky fur. Well, the parts that weren’t ritually scarred, anyway.

My long ears swivelled around, and my hackles were up. I couldn’t help it. I was scared. The devil-creator’s made the Khet, and in ages gone by, would hunt and eat us for sport. If even half of what the legends say about the devil-creators were true, then these were not something I wanted to be near. Even if it was long dead.

I turned and ran the way I came. My horns caught on something overhead, I stumbled and fell. Right in front of an ancient Khet necklace. I lay there for a moment, looking at the glowing green necklace. I breathed deeply, trying to calm myself. I saw that the necklace was made of some kind of crystal, with rectangular and spherical beads. I don’t know why I took it… I just did. I stood up and walked towards the cave’s entrance… alright, it was a fast walk, but a walk none the less!

The dust storm ended as suddenly as it had started. I was so eager to get out of there my horns hit a stalactite on the way out. I didn’t trip this time, but I swore as I left the cave and started to make my way back to my village. That’s when I saw it. A lesser Clockwork God. I think it may have been a messenger or something. It flew back and forth, then approached and spoke to me in its own language. It’s one large eye bulged and twitched.

I knelt before it. I didn’t know what it wanted, and wondered if I had sinned by taking the necklace from the tomb. “Don’t disturb the unworthy dead or the devils” as the elders would say.

The lesser Clockwork God spoke again. I looked up. I could hear it speaking to another god, but I couldn’t see any other gods. Then some rocks seemed to move, and then it appeared before my very eyes. Another Clockwork God. This one was a Mantis God. The insect like being was easily three times my own height. Unlike the messenger, this one seemed very friendly and inquisitive. It spoke to the messenger, then approached me. I bowed my head. It reached out and gently caressed my fur, touched my clothes, and looked me over like an overly-curious foal that wasn’t old enough to know better.

It seemed very interested in the necklace I acquired. It spoke in a harsh tone and suddenly snatched it from me, and ate it. It then glared at me with bulging, twitching eyes. Then it waved a finger at me and giving me a tisk tisk tisk of sorts. Then the Mantis God gently beckoned me to rise. As soon as I was standing, it gently turned me around and shooed me off. I can take a hint, and felt that I had pushed my luck enough that day. I thanked my ancestors and the Mantis God for his or her kindness, then I ran off back to my village.

I never told anyone about this until now… I doubt anyone in my village would have believed me. And judging by the look on your face, you don’t either. Not that it matters. 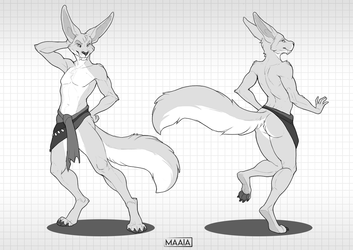 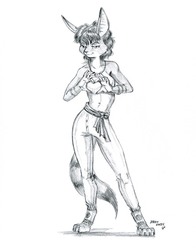 The Cave, the Devil, and the Gods (critique requested)

This started out as a muse log, but in the end I felt that it was more of a micro story than an idea for a story. It offers some tantalizing details about my fictional Khet species, but it deliberately leaves many unanswered questions. ; )

Either way, I hope you enjoy it!