ALL the Tauren! by Kyowai 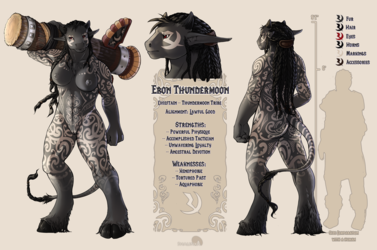 Ebon Thundermoon - Warrior extraordinaire, extremely protective of the Tauren people. She's not above knocking on some heads to get her way, not to mention she's not very shy about exposing her body. With muscles like those, who's going to complain?

Sei'Jitsu - Tauren witchdoctor. Raised by Trolls, calling Sei "amorous" is a severe understatement. With a silver tongue and quite a talent for the feral aspects of the Loa, he tends to get into plenty of trouble with the town guards for "indecent exposure".

Awanata Lighthoof - Timid druid of the talon. Awanata is a grand daughter of Janos Lighthoof, kind and venerable druid within the Mojache tribal village. Born with a mild muscular condition in her right leg, her childhood was a sheltered and quiet one, content to weave her dream catchers and tend to her tiny avian friends.

Balaam the Blind - A seer with a perchance for wandering, the blind priest devotes himself to aiding everyone he can, despite his physical hindrance. Though, the lack of sight has never seemed to cause him much difficulty - it's rumored that his "sight" is beyond that of normal.

Nikkei Stonehoof - Twin sister to Wicapi Stonehoof. Nikkei is a rarity in herself - a Tauren engineer. Almost a paradox. Her methods of "engineering" typically involve combining both Goblin and Gnomish engineering, then doubling the gunpowder requirements - both Goblins and Gnomes are still in debate over whether it is brilliant or more dangerous than Ragnaros.

Wicapi Stonehoof - Twin sister to Nikkei Stonehoof. Wicapi is, for lack of a better word, a know-it-all. Where her sister devotes her talented mind to her inventions and tinkering, Wicapi's passions lie within books. An avid reader and writer, the Taureness joined the order of the Sunwalkers to broaden her awareness of the world around her - she is currently dictating the first written word of the Earth Mother.

Makkitoto - A silent, morose Taureness, for certain. She rarely speaks, she rarely wears more than a few scraps of clothing. Her body literally frozen in time due to the grip of the Scourge, she spends her days leeching warmth from any willing partner. Little do they know, Makki's appetite for warmth, coupled with the twisted transformation that converted her into a death knight, had turned her into a monster - one that feasts on the life essence of others in the vain hopes of regaining the warmth of her previous life.

Art ©  CatoKun - seriously, give her money.