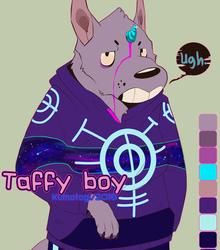 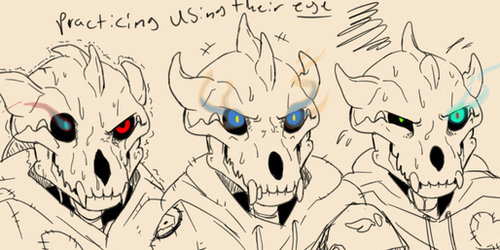 Whoa, finally! Now it's a BONE-afide start to my first ever fanart~:heart:

This AU is about how, a bit younger version, of Sans (when he was still into science with Gaster and was looking into the RESET's) had created a serum of DETERMINATION (DET. for short) from the souls of the humans that fell down there, but things went horribly wrong when he used the DET. on himself in the middle of a RESET, trying to stop it from happening.

The world was changed completely with the interference of two souls with DET. in an instant.

Now the whole world is RESET, distorted, and the barrier destroyed. The world is a wasteland, with monsters turning into REAL, blood thirsty, soul-eating monsters and humans nowhere to be found.

Along with Sans, with no remaining memories from the past, only remembering his name and the name 'Papyrus'. He finds three little (Gaster-Blaster) kids by him and gives them the names, Pa, Py, and Rus.

No longer the completely laidback, punny skeleton you know. Sans still likes to crack puns, but they turn very cynical and even eerily serious if he thinks that the person he's talking to looks like any sort of a threat to his siblings. This Sans doesn't mind killing on sight (He kills other monsters for EXP as well as to gain LV), as the world has changed to a harsh, real 'kill or be killed' universe. So anything that resembles a threat is either attacked or avoided.

FT!Sans has depression issues, has no remaining memories of the past and doesn't really WANT to remember them, as he's constantly bombarded with nightmares from his (possible?) past and they don't look too pretty tibia honest. He would rather spend his time focusing on the baby bones, teaching them how to ACT and FIGHT, making sure they have clothes (that he can scrap up 'n sew together, wherever he can find them.) food, and shelter. Their happiness is the ONLY thing he cares about.

FT!Sans has no Gaster Blasters, but blasts bursts of the same magic through his hands or magic circles that act as the replacement for the GB's/ though they are quicker at attacking.
'(Sans can quickly travel using what he calls "shortcuts." Sans excels in combat and fights with unique abilities that include: Karmic Retribution, changing the effect of gravity on the SOUL, and attacking the protagonist in the selection menus. His magic reacts to EXP; Karmic Retribution would presumably be weaker if the protagonist had little EXP.){From Wiki}'

FT!Sans can also, with the use of his DET., can use the SAVE and RESET function, but has never RESET because of the fear he feels from it for (unknown?) reasons.

LV: 13
AT: 10
HP: 64 HEALTH
DEF: 16 (Auto dodges any attack for____ turns )
DET.: 22 (Passive DET./ Not very DETERMINED/ Subject to change)
AF: (Auto teleportation when asleep +122 to DEF, Auto shield when attacked/ Can not passively use the teleportation, so when he sleep-teleports he has to find his way back/ when in auto-sleep, sleep lasts for five minutes before he can wake up)

Personality:
Pa is hardworking and energetic and catty, despite the harshness of the world, he retains his positive attitude and outlook of life. Often mimicking his big brother Sans in making puns. He gets extremely lazy when there's no FIGHT going on, can sleep on-demand anywhere, often auto sleep-teleporting into past places they've been before, finding himself in strange places.

He cares about his family deeply, but Py is his most treasured sibling. Though Pa does have his quiet moments too, often sinking into depression when there's no one to see. Wanting nothing more than to keep the family's spirits lifted, he keeps his happiness as a mask, making sure it never cracks under the constant pressure.

Personality:
Rus is is flirtatiously carefree and moves through life at his own pace; unlike the other two siblings, he doesn't hide his negative feelings. Throwing temper tantrums over his worth, comparing himself to his siblings, even Sans, at his lack of control over his magic and weak hold over his DET. Making him run away from his problems and his family.

Internally ruthless, Rus won't hesitate to kill other weaker monsters, (DET. filled or Regular monsters like him) in his spare time for extra EXP when he's alone. He likes the feeling of power over others when his family makes him feel, not intentionally, weak. Often to the point that he eats their SOULs while their still alive, insted of absorbing the SOUL after they have died. His cruel intentions don't really affect his amount of DET.

(Can affect the GRAVITY of the SOUL using BLUE magic/ quicker RED attacks, attacks first in a FIGHT/ has small 'Gaster-Blaster-Master-Casters' over the hoodies hands, using them to concentrate BLUE magic attacks/DET. doesn't leek, but takes over Rus's SOUL after BLUE magic is drained (50% chance to, lasts for 3 turns) DET. +{UNSTABLE} [UNCONTROLLED!Rus] Other stats +80)

If you could please leave a comment or any critique, It would fill me with DETERMINATION!

(I'll add the rest of the description later)