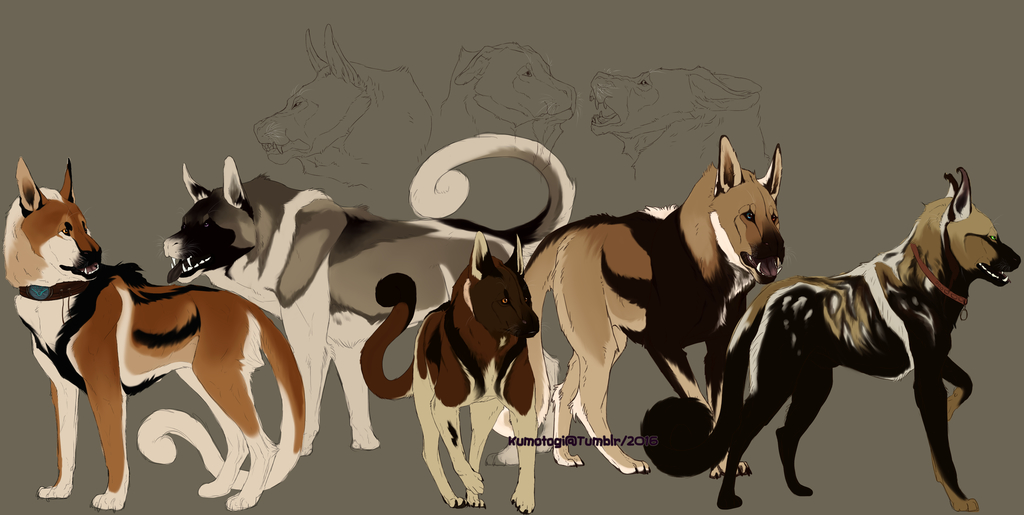 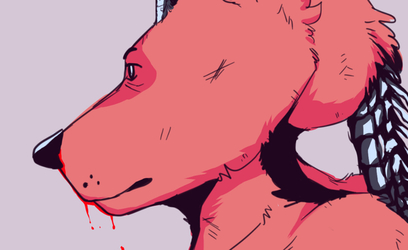 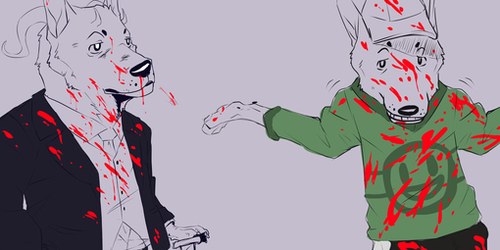 Along with a lot of still working on information:

Caines are the breathing peripatetic culture of Viking likeness in the world of Kumotogi. With their multitudes unbound, their species are classed as Daemons(common) as their high social intellect would grace them. There are many breeds of Caine, but the first was the Sharma, the dire of the Caine and the first blood, guardians to one of the first three gods, Aoife, the Creator of All Life.Who had the head and torso of a gorilla, but the legs and tail of an otter.The Caine are large and canine-like in appearance and some are more simian, with tails as long as their bodies that can hold their weight.With long paw-like hands and legs with thumbs. Hailed the “Senders of the Under”, they are the most common and one of the most powerful species that walks the ground.

Caines are anthropomorphic Daemon’s with specific language patterns that mostly determines where their from regionally. Everyone in Kumotogi speaks a variety of different languages, most Caines that speak Euthymius (the first created language of the Caine), a poetically rough language. They live in the west and southern regions of Kumotogi. Or most eastern and northern Caines speak Philomena, a more tactfully gruff language. And also, a good portion of the population speaks in Irmhild, which is a universal language, meaning when it’s spoken, most species can understand what’s being said.

The Irmhild language was created by a specific Demon by using multiple magic runes that relate to all the species that live in Kumotogi. The language is mostly spoken, but it is learned by mental communication.

That is "Memory Sharing" which is also used by manipulating magic runes, where one can share all or specific memories over their lifetime and get the other party to receive it. Encasing their experience and knowledge into the others essence, Which is also called 'Reincarnation of the Self'. You do it by making a small cut in the middle of the forehead, creating an encirclement of four Runes. The Rune for soul on the top right, spoken on the bottom left, life on the top left, and gift on the bottom right. This is the pattern for the receiver, it’s in opposite order for the giver. Then the foreheads are held and pressed together, the Runes are then activated and the knowledge is then shared. It's not a dangerous thing to do. It’s actually a very intimate act, shared through partners, family, and trusted individuals.This is how many kingdoms and armies have thrived because of this method; sharing even a few hundreds of years old amounts of knowledge, passed from generation to generation.Though it’s only the one that's sharing the memories that can have the other receive it, if the user isn't willing, the memories won't be shown and can not be extracted.

"Memory Sharing" was created by one of the first three gods, Tchort, the God of Coming Death. To talk to his love, Aoife, in secret.

Caines are a extremely adaptable species as they have the ability to change the specific color of their fur and can even lengthen or shorten it. Though through the change of their fur color, the parts of their fur that are changing will shed to make way for the newly changed fur, this process takes up to three weeks as an adult, longer as a teen/pup. In this process, Caines will go into a temporary hibernation, as they will need the energy and concentration to keep the change constant, with as few interruptions as possible. And to add, Caines can not change their whole fur pattern that they were born with, (sage levels of concentration for that to work). And that, even though some are possible, Caines can’t create colors or patterns they haven’t seen before, can’t create highly complicated patterns, can only create highlights of light/bright/slightly unnatural colors.

Caines have naturally genetic Heterochromia, Caines who have it are more revered as they are seen as being closer to their ancestors, the Sharma, than the Caines who have just two of the same eye color.

Caines with chimera colors(i.e. Caines who are wholly two different colors, ex: a Caine whose front is white, but the back half is black.) It doesn’t have to be a whole half, but a good chunk of the fur is a different color.

Lucius: He was not in love with Aoife, but he glowered at the thought of Tchorts happiness, of any kind thing that would glimmer in his direction; Tchort and Aoife were born first and spent many years together before Lucius was created. As he was a god only to help his brother god Tchort control the harsh and ever growing power within himself. Having realized his sole existence was so miniscule compared to the other two gods, he grew jealous and even hateful towards him.

Tchort: He is often described with the head and torso of a wolf, the neck, legs and tail of a deer and the horns of a ram. Tchort was analogous to Aoife and in kind love from their younger selves. The opposite of themselves and their natures never drove them from the other. Though they had to hide their love from the last god, Lucius, the Light of Guidance. Given the form of a lion head and mane, deer horns with the body of a white tiger. Though their Runes were powerful enough to transfer great distances to each other, so their love would remain secret.

Geez, I'v been working these paws down to the dew claws these days, heh. Anyways, the long awaited information and some more identifiable breeds of Caine that are being pumped out. I wanted to wait till I had more stuff to throw at you guys, but i'm not sure if i'll be able to before my summer school ends me with homework, heh ugh..

So like I've said in my blog, I'm gunna be re-workin' these guys from the ground up again, sigh, so much ground work..

This species is closed until subjected to it's complete and full species sheet/design(s)/information or until I say that it's for free personal use. Thanks.