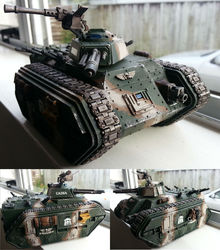 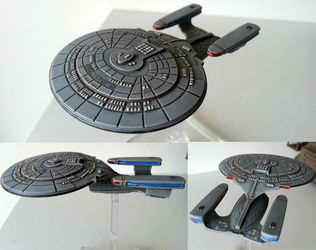 Continuing on with the theme that the WizKids Star Trek: Attack Wing ships that come in the starter box aren't very well painted, I decided to try my hand at tackling the iconic USS Enterprise-D for my Federation collection. I pored over a few production shots and checked in on what the general consensus is in the community, as the game piece comes with the slightly blue tinge shared by the production miniature on the show, but this doesn't match with the slightly more grey tint that we see on screen the majority of the time. People seem to agree pretty universally on the answer: Go with what you think looks cool! So I opted to plump for the as-seen-on-TV look.

The sculpt isn't fantastic, either, as it only vaguely matches the details on the saucer section, so some are either painted on or omitted completely. The lighting suggests that the ship is slightly darker than it is in reality, and I couldn't find a suitable angle which would show off the blue 'glow' in the nacelles a little better. The last thing I'm really considering is whether or not to risk trying to paint the registry numbers on there! As Attack Wing allows you to use non-named versions of the ships in Star Trek it would mean I could use this miniature to represent a 'generic' Galaxy-class vessel, but... I haven't yet. She always comes out of dock as the Enterprise-D in my games!

I'll consider the registry issue a little further before making any choices! For now, here she is!