A curious specimen by kleet

A most curious specimen

Apparently it was fished out near the local mines. There had been reports of strange warning signs being erected. Most unusual. "Collapsed tunnel" and "Caution water". Very out of place along the main road. I dispatched some mercenaries to apprehend the likely cause. They returned with a somewhat more feral candidate than I expected. I let them tie it up in the cellar while I finished a rather dull dinner engagement.

As I opened the door, I caught sight of an amusing scowl. He was restrained, of course, and well, but as he saw me enter he hopped out of his kneeling position and onto his feet. He wobbled, dangerously close to causing the collar to chock himself, before pushing his tail against the floor to steady and help lift himself. He bit the thick leather strap holding his collar to the ring above his head to aid his assent, and managed to stand proper before me. The effect was diminished by the shackles and handcuffs keeping his arms behind him, but it was still impressive to see such a diminutive beast showing pride and resentment. He stood, staring at me, bold as a bull, against the wall - slightly sideways due to his restraints.

His scowl remained constant. It was amusing. I explained in draconic that I did not wish him any harm. He responded, in the common tongue, that he himself was harmed. That took me by surprise, to the point I could not formulate a response at once.

We spoke, me in polite and measured tones, and him in rather ostentatious ones. He explained that he had copied the signs, to try and warn people away from the abandoned mines. After a little persuasion and a quick promise of privacy, he mentioned that his clutch had taken up residence and were working the mine. He knew that any wayward types would likely cause trouble, and any trouble would result in heavy loses to his side, so decided to warn against any curious individuals approaching.

I did not bother to correct his flawed logic concerning the mine. It was mine by right, but it was also beyond any economical use. I did however threaten him - claiming I would flood his home with my power, unless he swore fealty and agreed that their numbers should be controlled.

He stood in silence. Honestly, it was the last thing I expected from something that looked so meek – to just stand and scowl at their Lord without blinking or begging for mercy. But he was not out of surprises yet.

He explained (in astonishing detail that I later verified with my own records) the structure of the mine, and the nature of the hill it was built into, and the lack of any water source in vicinity, and the care in designing sumps and sluices to prevent flooding that had gone into its rehabilitation. And then he proposed a counter-offer.

A counter-offer! As if this was a careful negotiation and not an interrogation of a beast found wandering my country-side! His terms were quite elegant, enough to make me listen.

But anyway, I bore you with details. To the matter at hand:
The mine is open once more, although its output is reduced. There is no labour lost from other projects, and no wage to pay the workers. And it will remain thus for the coming years.
Eight weights of gold for every ten extracted will be paid directly to my coffers - on condition that no forged steel strays from the road towards the mine and that the price of livestock is displayed in both common and dwarven runes; dwarven being the closest standard match to draconic and easily understood by our new... company.

In other news, I hope you enjoy the measured nature of the script on this parchment. My new scribe, while slower than my own hand, is exceedingly precise and consistent. I begin to wish my hands were smaller, or my maiden's hands stronger, for such writing to come naturally to me. 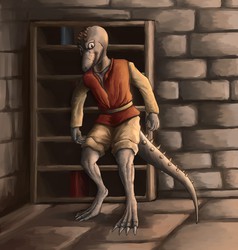 A story based on the wonderful gift by nyxapnea on FA - View it here: http://www.furaffinity.net/view/14533472

This is the official backstory of my first 'sona, Kleet.
I am working on the SRD sheet (something I decided to do since OnyxTao appears to have full details of his D&D/Pathfinder characters). But I doubt he'll be entering combat any time soon.