"Alright folks, Venus and I are here to demonstrate how a match works out in the puffy competition!"
"That's right Sat, so the thing with the competition is to mainly have fun with it. Some folks like going certain ways in it. Others go another way, in the end the goal is to make your opponent plump and immobile!"
"Or make them explode!"
"Or burst them like an overinflated balloon, like Saturn here!!"
"That's right!" Saturn stuffs a hose into Venus's snout and pumps her up, making her leafy paws puff up a little with her feet. "My preferred method is the air pump, course you could go blueberry. The goal though as stated is to go until all parameters are maxed, like listed above! How does one go about this you wonder?!"
"So you the players basically roll dice, d20 to see if you make a connection. Then roll a d10 to see if it lands. You need both a d20 to be 10 or higher to land as well as the d10 being a 5-0. Landing a 20 is instant no d10 is needed if you get that. We call that a critical!" Keeps pumping making Venus's paws plumper and plumper. She wiggles them around blinking at Saturn.
"Rolling a 1 means an instant counter for your opponent, again we ignore the d10 with that! Like Venus here, she experienced both a 20 and a 1. The 20 actually allowed me to get 10 points total which made me set things up! The one allowed me to add more to it!"
"Points add up, but there is one more thing. The bigger that number gets the higher the points go. See what you do to make a match go faster is called stacking. When that number hits 10!" He pumps causing Venus's tum to bulge outwards, her paws grab and squeeze at it.

"You get a 2x multiplier when you land on that area. To pick an area, you can't merely just say, 'I'm targetting your body!' You need to roll a d4 to target. If we allowed to target a specific spot I'd have made Venus a LOT bigger!!"
"After you get your target die rolled, you then roll a d8! If you wish you can pick a smaller dice to make the match last longer with friends, but a d8 does speed it up nicely." He plunges the pump making Venus's body plumpen out further, Saturn takes a small opportunity to poke her tum.
"We'll sum it all up later on to make it easier!" Saturn states while admiring his work so far.
Saturn pumps faster, making Venus's paws plumpen up to capacity, her hips starting to balloon out to give her a pear shape.
"Another thing is since her paws hit capacity there, the inflation has to go somewhere too! So we go from there to another field. So since her paws filled up!" Venus flaps them and nods.
"The air had to go to her hip and tail area. So say her body filled up then. You could pick, hips or head to displace the number over the limit."
Venus manages to bop Saturn on the nose making his nose turn purple and his cheeks to plumpen. She giggles while the fox plunges the air pump hard. She surges out her hips filling capacity her body on the verge of doing the same.
"The multiplier also stacks, honestly this could be adjusted if you want it to be. Since a zone is maxed out, I like to think of this as a ten times multiplier. Helps really speed the match up. Course if I roll a d20 and get a 20 as well as her spot and hit a max roll on the amount being added, she'd be filled with 160 points! You can see where it goes with a fox like me that loves bursting."
"Course for the sake of things, I won't burst Venus, since she isn't purely into bursting that often. She knows I love it and would gladly do that to me, but it seems like I'm winning this match very easily!" He grins toothily at Venus. She wobbles side to side trying to move around.
"Reason being that number would be so high is because hitting a critical on top of that multiplier means you double that multiplied number too. Like right now I managed to roll a 20, with an 8, targetting the body. This means she has 8 points minimum going into her body, but a x5 multiplier means she is taking in 40x2 amount of points!"
"Ready to end the match Venus!?" She nods and blushes as Saturn pumps rapidly. Her body quivers and swells out. Her snout bulging and ballooning with her cheeks as it smooshes into her round frame. Her whole frame hits capacity and with the sound of a cork popping, the hose comes free of her snout.
"Voila, a nice big Venus balloon!" He pats her body making her sound like a drum. So to summarize:
-D20 with d10 (You need to roll a 10-20 on the d20 as well as 5-0 on the d10 to land. 20's on the d20 count as crit's, you don't need to worry about a d10 roll then in that case. When rolling a crit, multiply your pt dice by 2 then. Ones count as retaliation against the one that rolled it, again ignore the d10 at that rate.)
-Once you land, you target with a d4 (You can always add more areas/zones like breaking the body down. Just remember keep the fields within rollability.) Example: Head, Chest, Belly, Hips, Tail, Paws = d6 (If you break things out like that, please make sure folks are on the same page with it, you don't want an unfair advantage on an opponent.)
-After you target, roll your point dice. (Point dice can be any dice, just you and your opponent agree upon it so again no unfair disadvantage.)
-Fill zones to capacity. Apply multipliers as you go! Table is as shows
0-10= no multiplier
10-20 = x2
20-30 = x4
30-45 = x5
45 = x10
-Bursting/No Bursting. If you want to play with bursting then you grow the final result number accordingly, we call this overinflating and triggers the bursting. The bigger that number the harder the pop! If you don't want to play with bursting then merely make the numbers all the same in the end and just leave your opponent as a big balloon.
"That about sums it all up, I do hope you all enjoyed this mock battle. Got anything to say Venus!?"
She purrs and grins at Saturn, "Later on you need to be a blueberry!"
"I'll take that as a rematch!! Anyway folks, Happy Pumping!!" 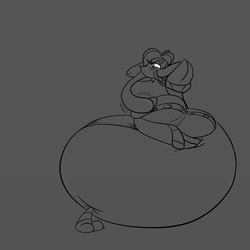 Saturn and Venus demonstrate how to play a game of puffy competition, anyone can play so why not give it a try!? ^.^