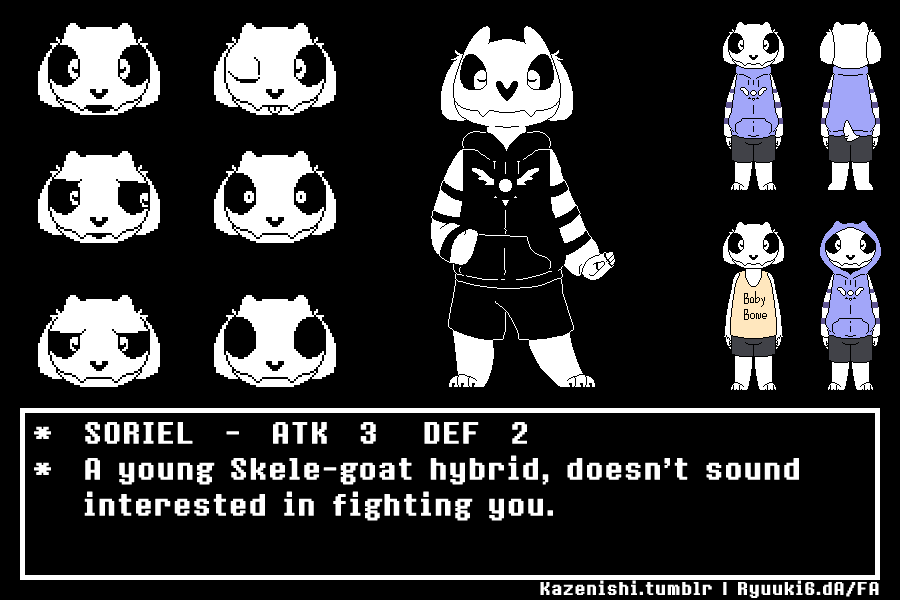 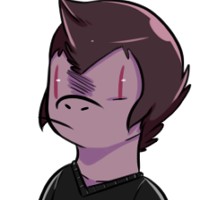 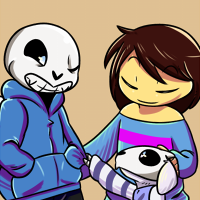 Please do NOT repost or claim as yours!

I’ve been working hard on the development of this little and I’m feeling proud enough to submit them. on Tumblr: [HERE]

!!Possible spoiler ahead (in case)!!

As the name suggests they’re Sans and Toriel child. They live together with Frisk and their parents in a post pacifist end AU where monster live freely between the Underground and the surfice.
Saying that, consider that Frisk has no reason to reset and another human can take the role of the ‘Chara’

PERSONALITY
Occupation/Specialties: N/A; helps Toriel at home.
Hobbies: Drawing, play with Frisk, puzzle solving.
Clothing: Anything cozy and warm. Their fashion sense reminds of Sans’. They mostly wear a sweater with the Ruins symbol and shorts, with bare foot.
Personality: At first sight Soriel is a shy and introverted kid and may avoid closer contact, following their mother advice to not interact with strangers, but if you have a chance to know them better they’re very friendly and playful, liking to play pranks and throw some bad puns sometimes.
Soriel often goes on adventures around Snowy, setting puzzle for the monster of the area and leaving their parents worried sick. Papyrus is the one who, most of times, finds Soriel on the surrounds of the city, being warned by a flower that the little went off all by themselves.
Likes: Drawing, Frisk, Toriel, Sans, Papyrus, play around Snowdin, watch TV.
Dislikes: Anyone who hurts their beloved, echo flowers, people who can’t enjoy puzzles and puns.
Disadvantages: They’re very young and don’t understand dangerous situations, putting themselves on possible danger.
Personal Quote: “We finally GOAT to meet.”

IN BATTLE
Prompting: Soriel won’t start fighting seriously until attacked (or if Toriel, Sans, Papyrus or Frisk were hurt before their encounter).
In a pacifist run they won’t show any will to FIGHT or interact with their opponent at first, just staring at you silently throwing a few flaming bones at the fighter.
ACTing will lead to the following options:

If attacked Soriel’s attacks become more aggressive, leading them to use a blue attack and prepare a flaming attack.
After battle Soriel can be befriended if you haven’t kill anyone around Snowdin and have become friends with Papyrus and Frisk before.

Genocide run: Soriel will start the FIGHT as soon as you enter Snowdin, claiming you’ve killed their friend and won’t let you hurt their family. They’ll already start with their aggressive attack pattern changing between blue bones and orange flames.
The first hit, if crit, will leave Soriel with 1HP, triggering his “blaster” attack (very similar to Sans’ gasterblasters’ attacks).
Once defeated the players instantly jumps one level.

RELATIONSHIPS
Toriel
She’s a protective mother toward Soriel and likes to constantly make sure they’re alright. Despite her overprotection Toriel is extremely affectionate and will provide what she can to make them happy.
Soriel like to try and help her with her works whenever they can or aren’t busy playing around. They love to read snails facts with her and even come up with ‘new’ ones to impress their mother.

Sans
Sans is the kind of proud dad who likes to show his child off whenever he can (mostly when he’s slacking off). He especially likes to bring them to Grillby’s, even being warned to not bring kids to such place or punished by Toriel afterward.
Also dad jokes! Soriel loves them, Sans is certainly the reason why they enjoy bad skeleton puns. Everytime they come up with a new pun they like to use Sans and Toriel as ‘testers’ and see their reactions.
But he isn’t just the comedian, Sans, like Toriel, can be quite protective with their child, keeping an eyesocket on them.

Frisk
They’re close siblings, Frisk treat Soriel with extreme care and affection. Most of times when Frisk goes out Soriel follow them and they can be seem together easily.
They like to go play on Snowy and go to the Ruin for exploration some times, Frisk likes to teach new things to Soriel, introducing them to other monsters and humans they met.
Soriel doesn’t know why but every time they approach a yellow talking flower Frisk looks a bit concerned. To not let Frisk worried they avoid most talking flowers, including the echo.

Papyrus
They’re two puzzle lovers, Soriel likes to try new things and brings them to their uncle. They usually challenge each other to see who creates the hardest puzzle of all time.
Papyrus not only taught them about puzzles, but also about attacking (manly blue attacks), he’s really passionate about teaching him what he knows, but Toriel doesn’t let him teach Soriel how to cook, for countless reasons.
Soriel loves to spend time with him and is very inspired by him when in-fight, but doesn’t enjoy his bad sense of humor.

Alphys/Undyne
They’re like their aunties. Soriel usually goes with Papyrus when he visits Waterfall to see Undyne (and when her house isn’t on fire), she likes to give them secret training to become stronger. Toriel can’t even dream that Undyne give Soriel a weapon and such training or even that they’re taking suspicious cooking lessons from the fish-lady.
In other hand they don’t interact a lot with Alphys, she acts curious, but never really approaches them unless Undyne helps her. In fact she’s intrigued by their resemblance to the former scientist’s weapons, due of their goat-skull face, but in consideration to Sans she doesn’t research it further.

Flowey
Their relationship is very complicated. Soriel doesn’t dislike him, but feels uneasy when he’s around. While Flowey doesn’t show any feeling toward Soriel, they sound interested in know more about him even with Frisk’s worries.
However they barely spend time together, especially if alone.