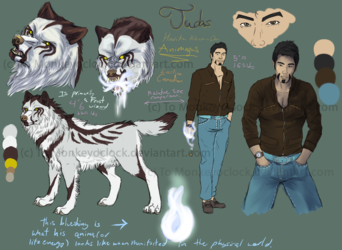 He's an artist himself, but he doesn't really draw animals, so I played 20 questions (More like 80 questions...) with him, and he gave me a huge list of things that'd be included in his fursona's design. owo Including his preference for animals, how close to HIM as a person it is, etc.

His preference for his forms goes Wolverine (His base form) then Grizzly Bear, then Komodo Dragon, then Bull.

So, to quickly summarize the design here.

Pagliacci is a wolverine shapeshifter, he wears an amulet which depending on form, grants him control over an element. His forms are limited to THESE, only.

And his piercings are ONLY in his anthro forms. Never, and I repeat never, in his feral forms. Even though his amulet is always worn.

And on the same tune as that; his build is large. He's very muscular, with huge fucking shoulders, but he doesn't have a lot of definition in the muscles, because there's a layer of fat over most of his muscles. (Like most of the guys you see at strongman competitions. Almost all of them are HUGE, and obviously built, but they eat a LOT, and keep a very large frame. As opposed to most guys, who work out and sometimes starve themselves to ensure they get every muscle to protrude. )

And a quick side note. He spends his clothed time either without a shirt on (Legit. In real life the man doesn't know the purpose of a shirt until he's forced to enter a restaurant.) or a plain tanktop, or tshirt if he HAS to wear something.

Otherwise he's almost always in shorts, unless it's extremely cold, or he's trying to make some kind of impression. Then Jeans it is.

A note about his outward personality. He's an odd mix of introverted. He wont communicate or talk with most anyone he doesn't already associate with, unless he needs to, or he's been addressed by them. He also has this air which deters most people from speaking to him. Doesn't help usually his expression is very cold, and almost angry.

But, he's normally quite friendly and eager to make friends when someone breaks past that outer barrier, is mildly interesting, and isn't being a total dick.

(ALSO. I can't find the photo now, but I referenced the bottom last pose from google. Not happy with it. Mad my anatomy seems worse when I reference poses from photos. 8| )