Back to the past again by Justin1029 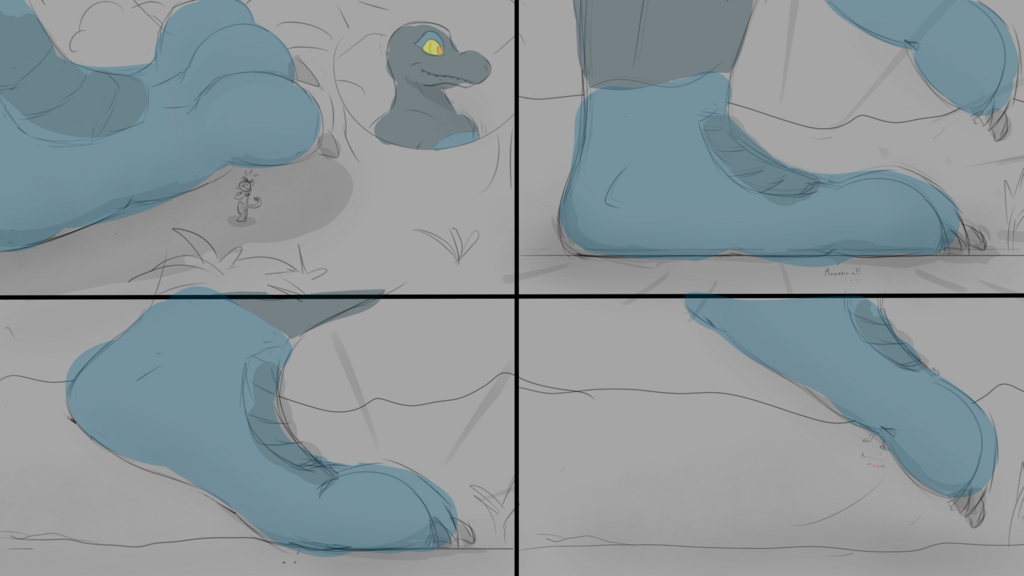 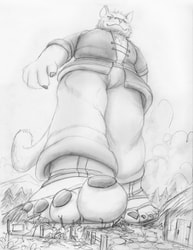 Back to the past again

Looks like Blackie went ahead to use that time-travelling toaster again after the last instance didn't go well for him back in the "future" he was previously in. And this time, he's back in the dinosaur world, but things seemed a bit strange this time around. And that's because he's definitely going to notice a BIG difference. And it's one he'll experience up close and personal.

Well, it seems like Justin, as his big Sauros (basically like a big anthro t-rex) in this world, and is having a nice walk in the scenic prehistoric-era nature. As the "king" of the dinos, he can't help but enjoy whatever nature offers him, even if things did get stepped on. And such was the case when he was just minding his own business, not caring about what's flattened underfoot. Blackie was there when he saw the big anthro dinosaur coming his way when a dark shadow was closing in. And that was when he turned around and looked up, eyes opened wide in surprise. That blue sole came crashing down so swiftly that he didn't have time to react.

He felt the weight of the mighty Sauros's foot come squashing down on him, the foot making a big print as it came into contact with the ground. To Blackie, it was a slow press as the weight increased, grinding him right between the dirt ground and the powerful sole. To Justin, it was as if nothing happened to slow him down, since he was the king of the dinosaurs. The weight increased further as Justin then went to take another step, his left foot moving ahead as it lifted up from the ground, leaving behind a footprint of his own. Meanwhile, Blackie could feel like his whole body was starting to sink into the creases of the sole's bare skin, probably roughened up because of the dino was barefooted. It's as if he was about to get trapped in there...

As Justin's left foot made contact with the ground, the right foot, with his big blue toes, then started to press further into Blackie's body, further compressing him onto the sole, making him stuck. And it was no surprise that secretly, he liked getting stepped on, even if it was unexpected. The air pressed right onto him, sealing him with the pressure. Finally, Justin's right foot lifted up, with Blackie now used as a make-shift insole. And it seems like Blackie still might have that toaster with him, as he was transported away in a blushy mess, trapped between the stinky paw and the big toes. Then again, it's unclear if Justin might even feel the tiny time traveller squirming underneath his big blue foot.

After all, time waits for nobody, and this one's definitely one for the ages where Justin had recorded the first stomp, to an outsider. ❤️