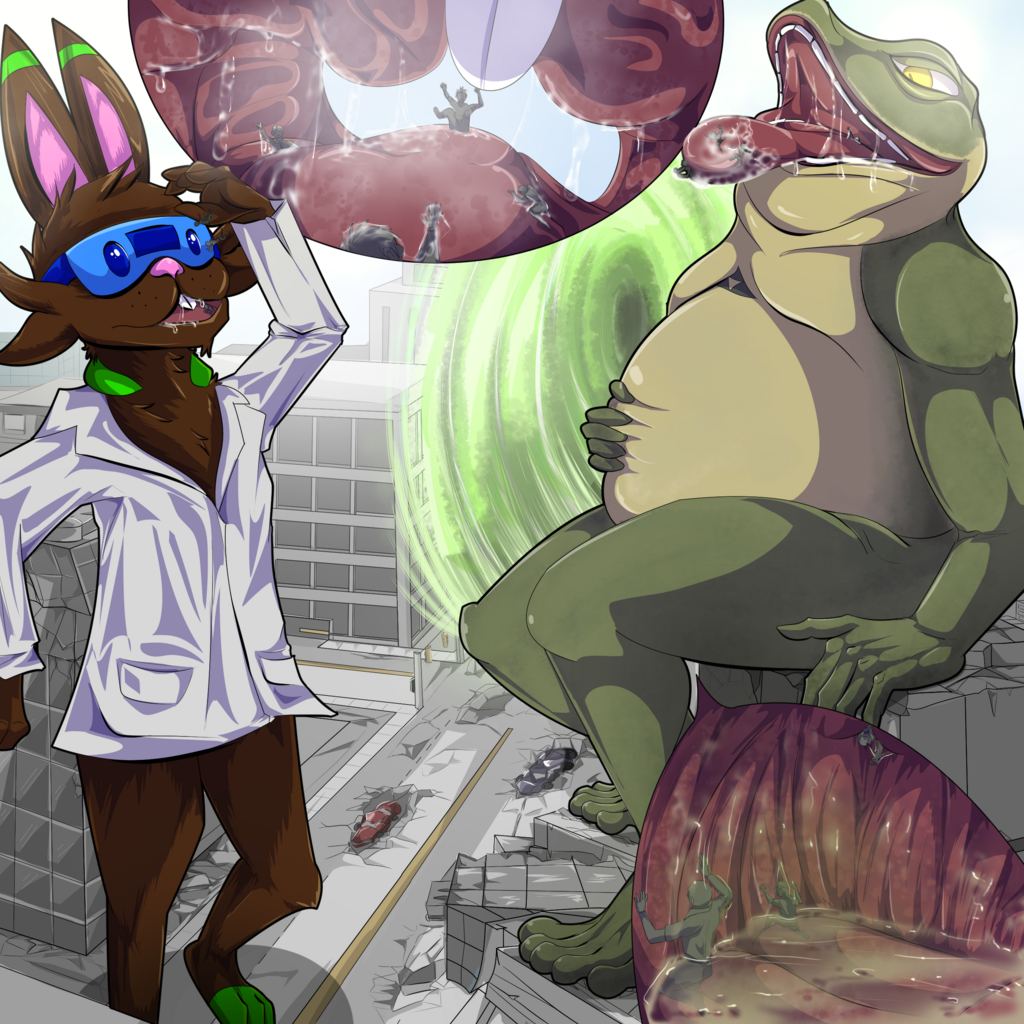 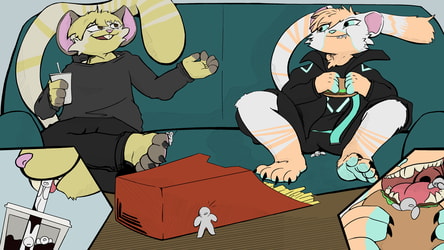 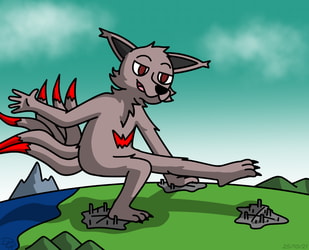 Against the pair of hungry giants—both of which appeared from a portal as large as they were—the tiny humans stood no chance. Either falling victim to the massive paws of the frog and rabbit, crushed into the pavement as they stomped throughout the city, knocking down buildings and flattening vehicles or any unfortunate victim stood in their path, or by slipping down their ravenous throats. After laying waste to this part of the city, treating it as nothing more than a playground filled with delicious snacks, Bunson and Hector managed to corner a large crowd of humans at the end of the street.

Bunson acted first. The brown Scorbunny leaned down and swiped his paw across the group. He managed to snatch several of the humans into the palm of his hand. He squeezed them within a tight fist to prevent a single tasty morsel from escaping before lifting them above his head. Screams filled the air when the humans peered between the gaps between his fingers, finding themselves several miles in the air with a gigantic face directly below them. Their cries grew louder, their struggling worsening, as Bunson unhinged his jaw to reveal the bottomless, pink pit that was his mouth. The slimy tongue spasmed with a lively energy as it anticipated the arrival of its next victims, drool oozed from the roof of his mouth, saliva sprayed forward, and hot breath wafted over the humans. Bunson lowered them down, and then his fingers loosened. The humans plummeted down and down, straight into his smiling maw. Upon landing onto the hot tissue, his prey were instantly drenched in the saliva that marinated the entire cavern. Their screams were muffled with the loud, blissful murmurs of the giant rabbit, and more so when he closed his mouth. He sloshed down from cheek to cheek, rubbing them between his tongue and palate, extracting as much flavor from them as possible. The viscous slime completely coated them by the time Bunson tilted his head backwards and lifted his tongue. The soggy wad of wiggling humans slipped to the back of his throat before an audible and wet ‘gulp!’ sent them tumbling down his esophagus.

Having witnessed the rabbit consume their kindred, the remaining humans attempted to flee to the scene but before they could move a muscle, a glob of hot and moist tissue smashed into them, instantly smothering them with slimy flesh and sticky saliva. Then, as quickly as it smacked into them, the flesh suddenly retracted with the stuck humans in tow, struggling and screaming for help. The giant frog, Hector, managed to catch the rest of the humans with a well-aimed tongue. He lapped them up with ease, dragging them into his mouth where they were promptly swallowed down. The humans were crammed down the tight and fleshy canal, wiggling in vain, for several seconds until they were deposited into a dark, humid chamber, landing in a pool of lukewarm fluids at the bottom of the sack. The humans stood up, covered in stomach juices and saliva, before clambering towards the stomach walls. They pounded against the lining, begging the giant to free them, but this was met with nothing more than a noisy belch that rumbled the chamber and knocked them off their feet.

Outside, the duo continued to rampage through the city, stomping and consuming more inhabitants of the tiny world they intruded on.

This was definitely a really good commission my friend bunsonburner got for me, and yep, this is introducing another character, but pretty much an underrated species, FROGS. :D

I got more info on the frog, but if anyone wants it, just ask~