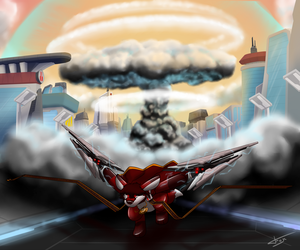 Here we see a Tactical Ronin, aside from courier duties around the Empire and Hyperion navigation in local sectors sometimes the battlefield needs an extra hand in operation.

He sports a power blade of sorts he found on one of his many adventures before coming to the empire, and a gift from Jac himself.. a Monarch-S class scorpion turret. it has a range of weaponry that is available for upgrade (cakeray abilities and other ray based systems still pending legalization of use with this class of turret) at any time, even on the battlefield and can move from any location after being deployed. One of the Empires greatest first achievements during the third world war on Terra.