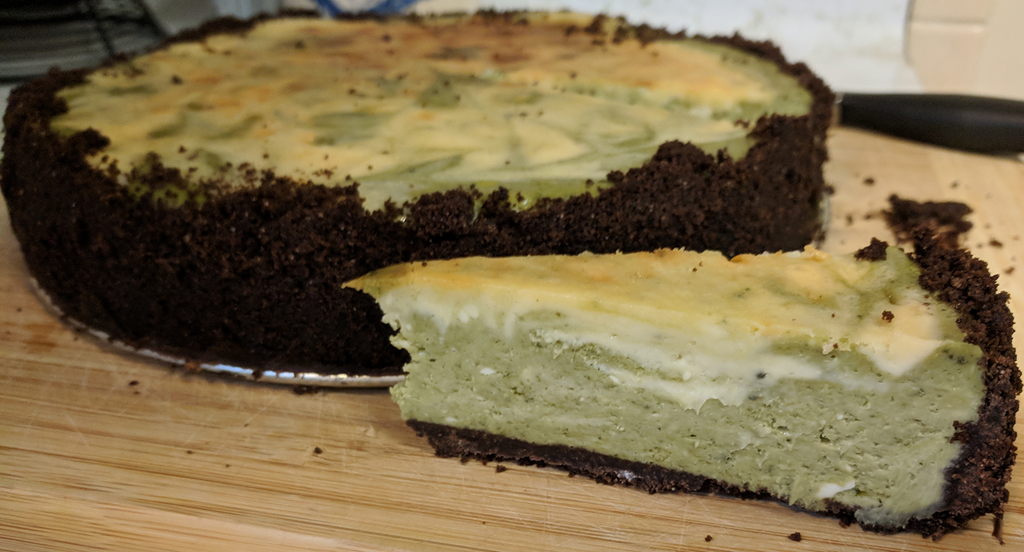 Recipe to be submitted to ~FACCC2.

This delectable dish combines the earthy flavors of green tea and the bright, sweet flavor of white chocolate in a creamy New York style cheesecake.

NOTE: The recipe below matches what was done in the photo. However, I believe that in the future the marbling will be more successful by halving the amount of white chocolate and heavy cream used, and reserving an eighth of the cheesecake filling rather than a quarter (see step 7). I have not tested this, though, so experiment as you will.

Special Tools
While it is possible to make this recipe using other methods, I used the following to assist:

Instructions
1. Begin by bringing cream cheese fully up to room temperature. While this can be done by leaving out for several hours, I find it is better to remove them from their box, seal them in a watertight bag, and submerge in hot water for an hour. Change the water as needed to keep the temperature up. Prepare the double boiler and combine white chocolate and cream. Melt it until smooth and creamy, stirring often.
2. Preheat oven to 375° F. As you prepare all your ingredients, take the eggs out of the fridge, as it is desirable for them to be at room temperature as well. Take a sheet of heavy duty, extra large aluminium foil and wrap the outside of the springform pan to ensure it remains watertight. I often do this with a pair of sheets rotated 45° off of each other.
3. If using whole graham crackers, break them down in a food processor into crumbs. In a medium size bowl, combine the crumbs with 1 Tbsp. of white sugar.
4. Separate 5 Tbsp. of butter from the stick and melt it. Melt the remaining 3 Tbsp. in another container.
5. Combine 5 Tbsp. melted butter with the graham crackers mixture, stirring thoroughly. Use 3 Tbsp. of butter to brush down the inside of the springform pan. Pack the graham crumbs to form a crust approximately 1/4 inch thick. Use a straight-edged glass to help with forming it properly. Bake this crust for 10 to 15 minutes until fragrant and toasted.
6. Place cream cheese in the stand mixer and beat until glossy and smooth. Use a spatula to push the filling back down to the bottom. Add 1 cup of sugar and repeat. Add 1 tsp. vanilla extract and then turn the mixer back on at low speed. Slowly add eggs one at a time until the yolks have broken and everything is properly combined (do not over mix). Once the white chocolate is done properly melting, remove from heat so it can start to cool (keep an eye on it so it doesn't solidify again).
7. Separate about a quarter of the cheesecake mixture and place in a separate bowl. Add matcha to the main mixture and stir slowly so as to incorporate it without kicking up the powder or over mixing. Once that is done, and the white chocolate is cooled enough that it will not immediately cook the egg in the separated quarter of the mix, slowly stir the white chocolate into the reserved quarter, mixing to keep the white chocolate spread out to prevent the egg from cooking.
8. Once the crust is finished, remove it to cool and reduce the oven to 350° F. Pour the matcha mixture into the crust until it fills about evenly. Slowly pour the white chocolate mixture in a spiral to begin the marbling effect, then run a butter knife through the mixture in a crisscross pattern to finish the marbling.
9. Place the springform pan on top of the wire rack in the larger baking pan and fill with water to about 3/4 of the way up the side of the cheesecake or as much as you can safely fill the pan. Place in the oven for 50 to 65 minutes until the outer edges are set but the middle is still jiggling. It is strongly recommended you do not open your oven until 50 minutes have passed. In my case, this took another 5 minutes to finish.
10. Once the cheesecake is finished as described above, turn off the oven, crack the door, but leave everything in place. Let sit for another hour.
11. After an hour, remove the cheesecake from the water bath and carefully run a knife around the outer edge of the crust so it doesn't separate as the cheesecake continues to cool and contract. Discard the aluminium foil and allow it to continue to cool until it can safely be placed in the refrigerator. Once it reaches that point, cover the springform pan with plastic wrap and refrigerate overnight.
12. After allowed to cool entirely overnight, the cheesecake is ready to be served! This is best done using a very sharp knife that's been run under hot water and wiped off after cut. It is recommended but not required to eat the cheesecake after the slice has warmed to room temperature.