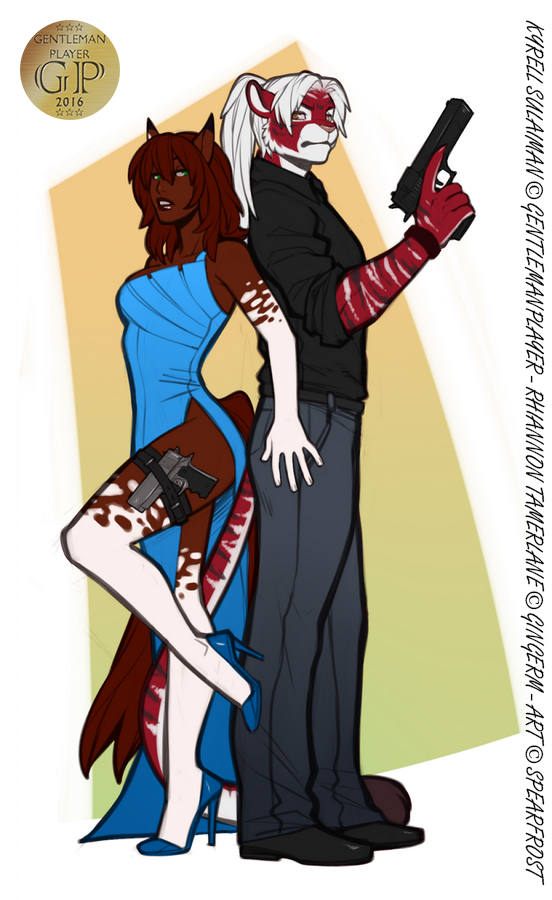 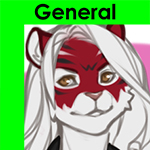 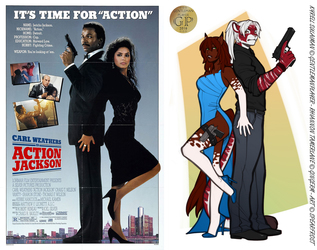 It was going to go down now, and both of them knew it. "Ready?" he asked, his voice a low, primal growl as he thumbed the hammer of his Desert Eagle back.

Excitement sang in hir blood as shi pressed back against Kyrell. Shi could feel the tiger's strong muscles rippling under his shirt; the hot, strong scent of him filled hir sense; the warm fur of his tail caressing one cream-furred calf. Everything was slow-motion crystal clarity and heightened awareness of everything, including him. Shi raised hir leg, letting the thigh-slit dress fall away to expose hir Defender, ready in its thigh holster, and hir hand slid down his hip. Strong fingers dug in as shi squeezed his ass urgently, then drew and cocked.

First, let me say that this artwork is NOT part of The Company series.

In previous works, when you have seen these two together, there's been some nookie going on, and it was tied to the aforementioned story series. That is not the case this time around.

GingerM is a good friend of mine, and I wanted something that could be posted on sites like Facebook, DeviantArt, and Tumblr.

Once again, I called upon the talents of my friend Spearfrost to draw the image. The guidelines were that Rhiannon's dress was to be blue, and Kyrell's clothes had to be black and gray. Also I wanted Kyrell to be holding a Desert Eagle semiauto pistol, and Rhiannon carrying a Colt Defender in a thigh holster. I let Spearfrost design Rhiannon's dress. And I love how she put Kyrell's hair in a manly ponytail.

Also, you get an idea of their height differences. Rhiannon is six feet tall, and Kyrell being three inches taller.

I sent this to GingerM yesterday (Jan. 17) and she absolutely loves it. She wrote the vignette that you read at the start of this description.

Everyone else, enjoy the image.

Kyrell Sulaiman is the intellectual property of

gentlemanplayer, and may not be used in any way, shape, or form without my expressed written consent.

Rhiannon Tamerlane is the intellectual property of GingerM, and may not be used in any way, shape, or form without her expressed written consent.

The above picture is the combined intellectual property of myself, GingerM and

spearfrost, however, Spearfrost retains original copyrights. It may not be modified or redistributed without their expressed written consent.

GingerM is the only other person that has permission to post this picture.