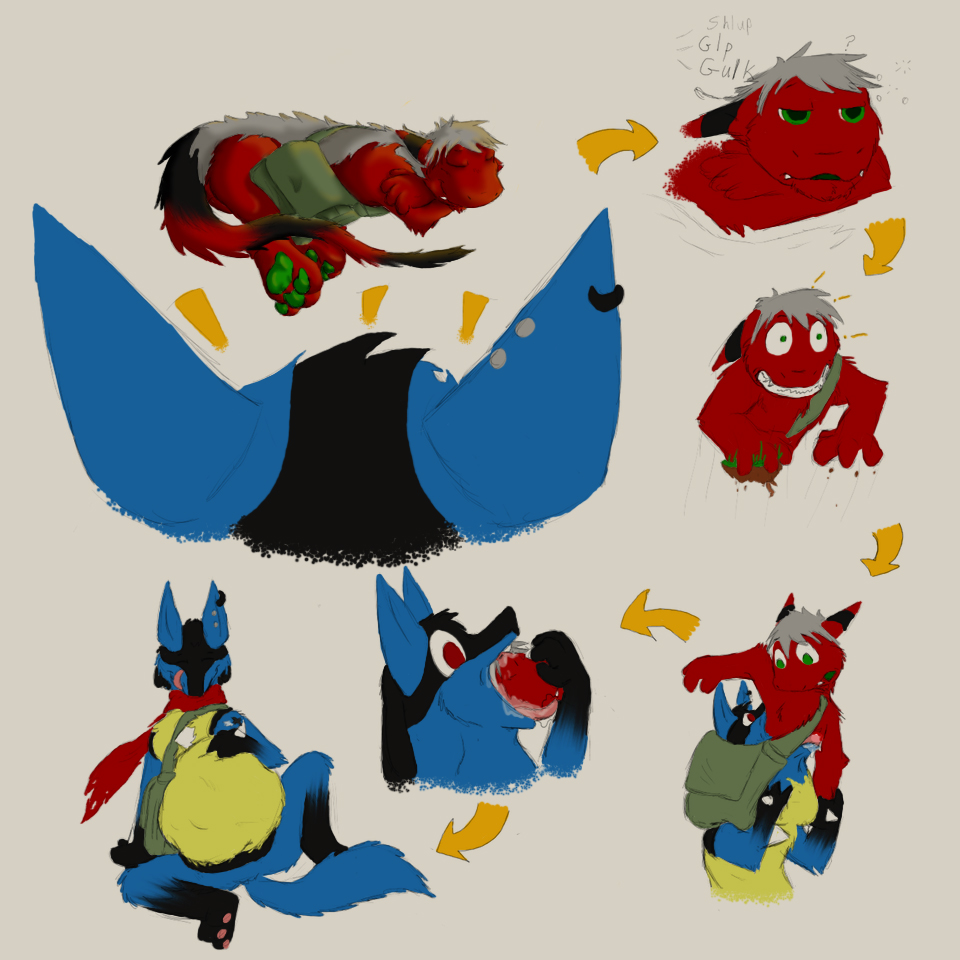 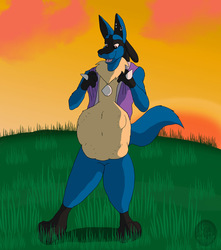 It had been a long and rather monotonous day full of lectures and writing long winded papers on various topics for Reed so when the day let out, he wasn’t particularly full of moxie. He slowly dragged his paws back to dorm for some well deserved and much needed sleep. The poor Igwulf was barely holding it together as he slipped back into his room. Too tired to even close the door all the way or crawl onto his bed, Reed collapsed and curled up on the floor, his book bag still slung over his shoulder.
As the red Igwulf snoozed, a familiar friend poked his head into his room. “Reed? You in here? You left your door open and I…” The voiced stopped as the body it came from spotted Reed curled up on the floor, out like a light. “Well, well, well…look at what Galileo stumbled upon~” The Lucario couldn’t help but smile at the sight but before he could lend a helping paw his belly let out a slight growl. He was hungry and there was a free meal just laying there.
Galileo couldn’t help himself, Reed was just too good to pass up. “Oh….I’m sure he won’t mind. I mean…it’ll be like being in bed~” The Lucario knelt behind the sleeping Igwulf and slipped his fuzzy tail into his warm maw. As soon Reed’s tail made contact with the ‘Cario’s tongue, it was over for Reed, who really didn’t have a say at this time. Galileo slurped more and more on the Igwulf’s tail, gulping on it as more or it slipped into his mouth, then opened his maw up a bit to fit in Reed’s soft foot paws. The Pokémon’s tongue licks gently at the small green pads before they were gulped on and gulp back into his esophagus. He started to work up the Iggy’s legs, enjoying the feel of his fuzzy friends leg’s bulging out his throat, and soon after he made short work his legs, Galileo worked out Reed’s waist and stopped for a bit at his friend’s stomach.
The Lucario gulped a few times to get a bit of the Igwulf’s stomach into this mouth before giving it as few affectionate licks. Due to the licking, Reed start to stir from his slumber, not knowing what was waking him up. Suddenly, Reed’s eyes jolted open as he felt himself being lifted up rather abruptly; rather startled he’s looked around down to see Galileo down on his stomach, almost up to his chest. “Gali?! W-w-what are you doing?!” The Igwulf asked, his book bag this on but the Lucario had put it off to the side of his body so when he finished, he’d be where it; he noticed that Gali’s belly was rather lumpy as his foot paws and legs were already within it. With his mouth full the Lucario could only respond with gulping further on his friend, getting to his chest, where started to push at his muzzle to try and pry himself out. It was a futile attempt from the start; Galileo only opened his maw more so when Reed went to push down, his arms and a bit more of his body sunk in.
Galileo took a couple more gulps and found his friends head just out slightly from his mouth. The ‘Cario murred happily around his friend’s body as he gently pushed on Reed muzzle with a paw while gulping to ease the last of him in. “Gali wait! You don’t need to eat me! I can make you something quick and filling!” Sadly his plea was ignored. Galileo got Reed’s head to the back of his maw; he slowly closed his maw and gave one final gulp, sending the iggy down to his stomach. Reed slides down the slick, fleshly colored tube before settling into his friend’s stomach, making it expand. The Lucario sat back on his friend’s floor, Reed’s book bag slung over his left shoulder, looking over his stuffed stomach. Reed squirmed about, making the full Lucario murr once more. “Look at it this way Reed…You get a nice, warm, safe place to sleep in~”

Original peice can be found Here~