Lagomorphs -- Chapter 7: Inside the Cliff by FurryWurry 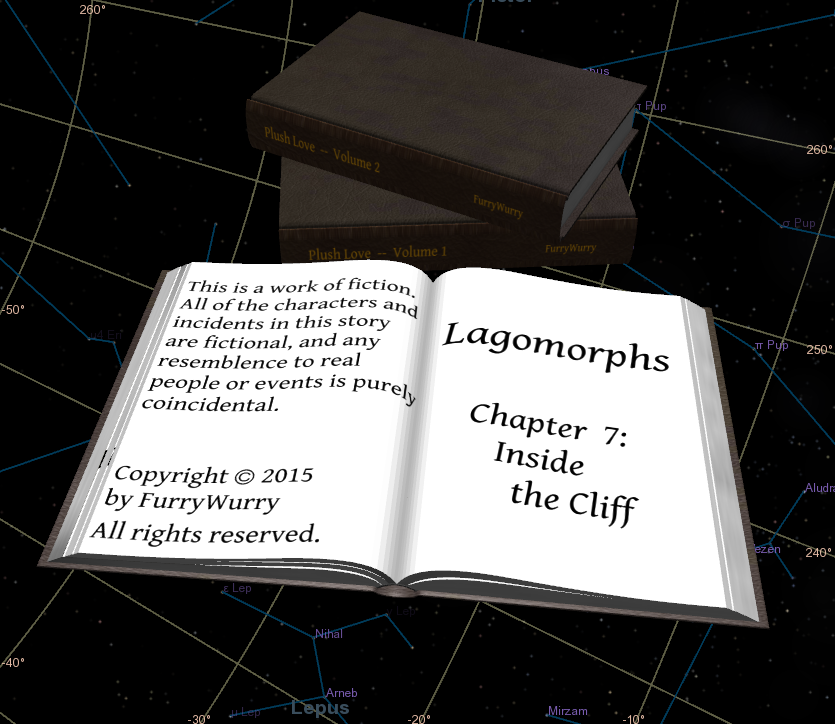 Chapter 7 -- Inside the Cliff

[i]Dammit![/i] He hoped Jenny wasn't the kind of person who said "I told you so!"

Jeff fumbled through his backpack to dig out his phone. It was completely dead. He couldn't even get the clock/login screen, let alone the illumination feature. Shit. A fine time for it to quit. Even the camera wasn't working. Its screen was black, too. But deep in the pack he could see a dim blue glow. The baton wasn't just a dull, black bar anymore. When he pulled it out, there was a tiny spark of blue just under the handguard, and the slider moved a little, too. It was a flashlight! Its narrow beam was very dim, though, barely making it through the fresnel lens on its end. Polishing it didn't help much. Doubtless its batteries had worn out after being in the open for however long it had been. Jeff was grateful the backpack's inductors had been able to charge it at all.

The feeble blue glow showed that the way he'd come in had collapsed entirely. That last lightning bolt must have been just enough. Couldn't the cliff face have held up just one more day after all those centuries?

Jeff tried moving some of the rocks, but another slide started. He had to hop quickly to get out of the way. A smashed foot wouldn't be fun.

Should he wait here for possible rescue? How long might that be? He only had about a half-bottle of water left. You could go without water for up to three days, right? But that must be an agonizing way to die.

He could feel a very faint breeze coming from the tunnel behind him. Maybe air was getting out through that pile of rocks, but he sure wasn't. Nothing for it but to see where the tunnel went. Where air came in, maybe he could get out. The passageway's floor looked smooth enough. Maybe he really didn't need to have the rod light the way. There was no way to know how long it might last, so he probably should save it until he really needed it. The tunnel's floor and walls were smooth and flat. He didn't see any fallen debris: whoever had dug it had done an exceptional job. Maybe his phone would work if the tunnel eventually led to the outside. Then he'd be able to call someone to come get him.

With the light off, he couldn't see a thing. At first he was cautious, sliding his feet, shuffling along the passageway, but that was just too tiring. The gentle downslope was even, so he tried walking almost at a normal pace.

The tunnel went down. And then down farther. Walking carefully in the pitch black, he trailed his hand along the right side of the tunnel. Jeff didn't feel any passageways leading away from the one he was following, just a smooth surface. The tunnel was too wide to touch both walls at the same time. If there were exits any on the other side, he wouldn't know, but he tried not to think about that. At least this way he wouldn't get lost, at least not any more than he already was. Always turn in the same direction, wasn't that the way to find your way through a maze? Except that there weren't any other passages, so it wasn't really a maze. Not yet, anyhow.

Eventually, he thought maybe he saw a dim light ahead. He'd been in the dark for so long, though, maybe he was just imagining it. So deep below the caldera's rim, it could hardly be sunlight, could it? Or did it have the same origin as that gentle, intermittent breeze he could still feel on his face? A way out?

The illumination gradually increased until he could just make out the end of the tunnel where it opened into a dimly lit space. It still wasn't bright enough to make out any colors, though. The walls could be brightly painted and he'd never know. They seemed to be a uniform dark grey.

The domed room was maybe twenty feet across. He could barely make out several other tunnels opening into it. One of them had collapsed, with a pile of rubble spreading out onto the floor, so he probably shouldn't stay any longer than it took him to decide which one to take. They all looked the same, all equally likely to collapse on him. He looked nervously back the way he'd come. Nope, no different from the others.

The dim glow was coming from the top of a broad, low pedestal in the middle of the room. Thin threads of orange light formed a half-dozen sketches of animals, one nearest each of the open tunnels. The sketch closest to the tunnel he'd come from was a monkey. The seventh sketch, across from the passageway that had caved in, was just dark illegible scratches. Could the light be bioluminescence of some kind? Or maybe due to some kind of radioactivity?

From their style, the sketches looked like they might have been done by the unknown artist who'd made the medallions he'd bought at the pawn shop. Were they totems of some kind? But how could that be? The dragon seemed very much out of place. Or was he wrong about that one? Might it actually be Quetzalcoatl or one of the other Central American serpent gods? Had Aztec influence reached this far north? That still wouldn't explain the tiger. It definitely had stripes. And fangs.

Jeff walked around the room, pausing in front of each of the open passageways. Even when he wet a finger, he couldn't tell where the breeze was coming from. It was just too fitful, and maybe each of the tunnels was contributing a little. He couldn't even tell if any of them might lead to the surface. None of them had an obvious slope where they entered the room, but it was too dark to see far into them. He couldn't think of any serious reason to pick one over another.

He chose the way of the rabbit.

Lagomorphs -- Chapter 7: Inside the Cliff

Jeff tries to find a way out