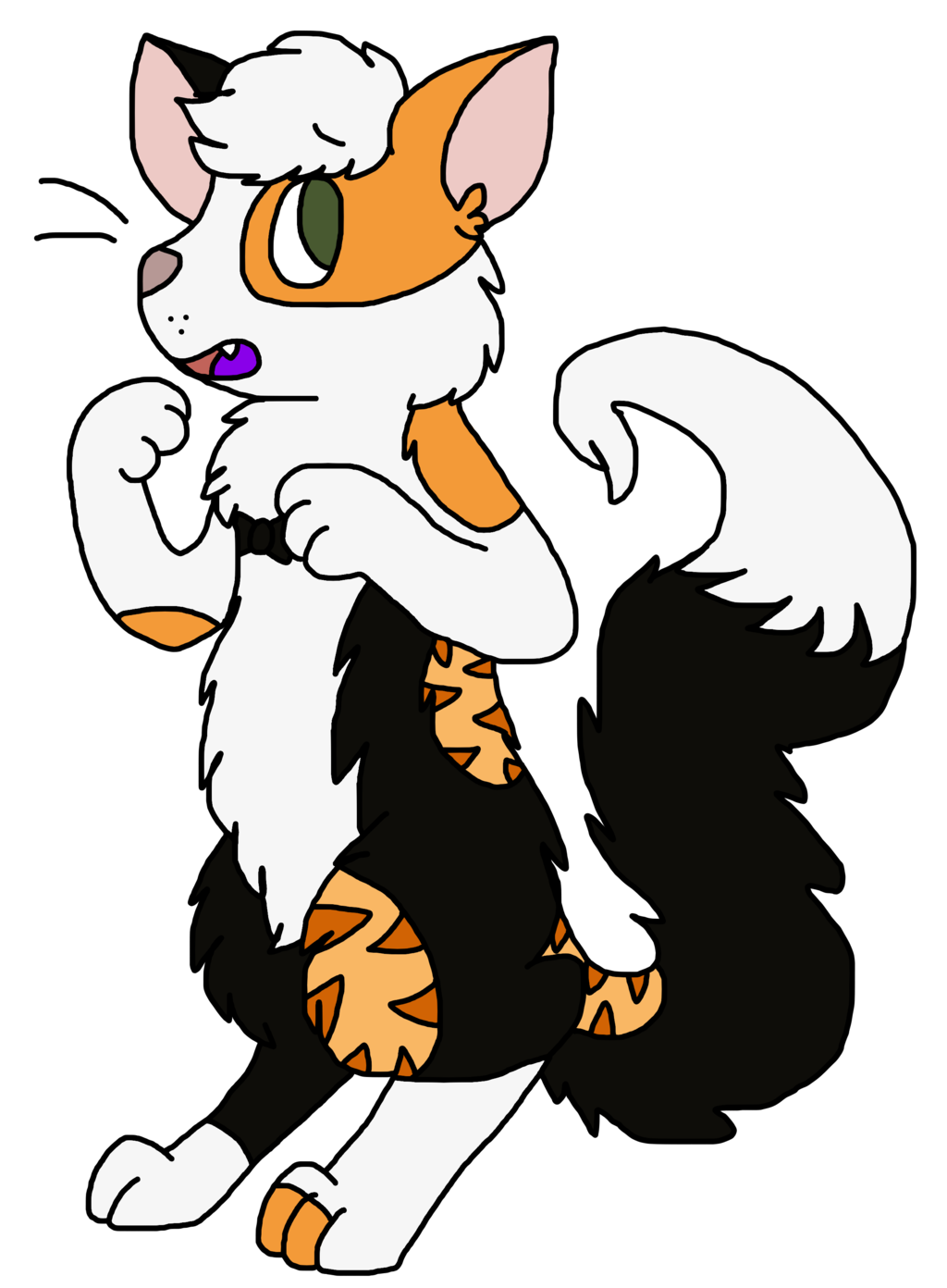 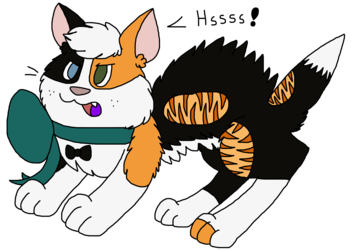 So, on my birthday, I didn't really make a birthday picture like I wanted. I'll finish it one day...

Instead, I sketched the design for a new fursona! I had the idea in my head and I was finally glad to be able to flesh it out!
I'm a kitty now! :3
My stripes are the only thing that's kinda... eh for me, but otherwise I love my design!

I'm a huge fan of Orange Tabbies, Tuxedo Cats, and Calicos! ^-^
So, I said, "Why can't I be all three?"
I love when people draw bowties on Tuxedo cats, it's really adorable, I'm sorry, I'm just gushing right now
I also love when cats have the off-color toes. I usually hate asymmetrical things on designs, but for cats... they get a pass.

I was going to make her hair (head fur) orange, but it would have made her look like Pace. XD
So, I made it white because of me accidentally making it white on this picture: [Link Soon]
I also have heterochromia, another trait I love with ca-- err, animals.
Fun fact: My granddad used to have a catfish with heterochromia. I loved that fish. But, he passed away...

Did I mention that this was a bad move? Like... I'm really e--
...
---asily distra--
...
--cted with things now.
Like, feathers! That just suddenly appear over my he-- OH MY GOSH, FEATHER bats
And, random yarnballs that roll by.
...do they still make ya-- YARNBALL! chases

At the same time, I realize why I didn't work being a dog (besides Di).
I'M NOT A DOG!
I'M A CAT!
I mean, so many things connect!

I still have no idea what kind of cat I am. I'm kinda big irl, so Maine Coon? ...no, I'm skinnier... also, that's what I made Astrinka in the Cat AU because SHE'S huge. ... Too late to make myself a Scottish Fold... that woulda been great... I would had floppy ears and everything. I'm an idiot.
...Ragdoll? Okay, no, just looked those up along with other cats...
Maybe I'm just a mutt like Ben...
My coat's medium-length, though, unlike his...
So... I'm a Domestic Mediumhair?
Edit: I made a Domestic Mediumhair a real species in my universe. It's an extremely rare gene mutation that causes a merging between Shorthair and Longhair genes. If I'm wrong, I have no idea, I'm not that good at Science, go to Di about that!

Also... because this is fursona...
...and I'm fursona...
...and my name is Sonja...
...I now have a FOURTH character with that name.
...but, cat here is me. The other two don't really count.
Sonja (Persona) is a human. 'Nuff said.
Sonja (Popplio) is my character, not 'sona, in the Pokemon Universe. (Okay, Pokesona, but not my main 'sona anymore.)
Sonja (Werewolf) is a form of my persona, who is again, me. But, as a cartoon human.
...soooooooooooooo, it kinda doesn't count.
It's NOT me being unoriginal!
Also, when I name fursonas of mine a different name, I disassociate. (Ironically, not with Di, though.)
It's my name or nothing.

More trivia for anyone who cares: I was developing a Doberman 'sona named Deka (pronounced Day-gah) before I started on this 'sona and... I didn't like her that much after I was done... I like her design though! And, how she's polydactyl! And, in my universe, that means you have FIVE fingers instead of SIX (everyone normally has four fingers, so five would be correct). XD (But, in art/animations/etc. that has the characters with five fingers, it'd be six. Like Stanford!) I might still make her to have an alternate dog 'sona, but since I'm more cat-like than dog-like, it might not work out... she might just be shelved... I dunno anymore...

Who says the introductory picture has to be all happy?
I'm a worry-wort.

Whoops, I did a long description again