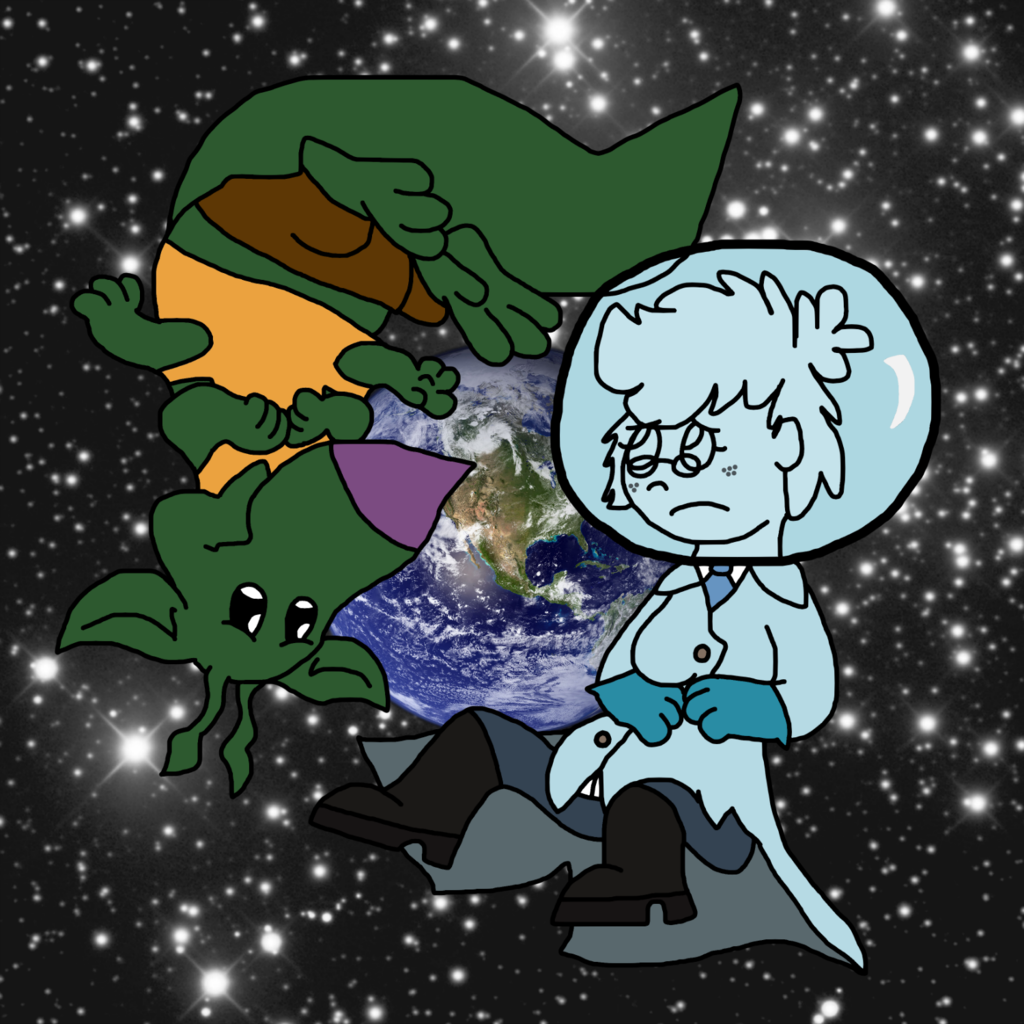 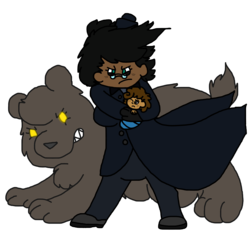 Okay, just... look at this.
LOOK AT THIS PICTURE.
If it burns your eyes, that's because 1) my art style is too saccharine for you. As a Dr. Puppy, I suggest that you watch about a good... checks phone 6 hours of some action-packed fast-paced movie starring Bruce Willis. Or 2) it looks really bad to you and I'm sorry for that. Once again, I'll dispense my Dr. Puppy Wisdom: apply frequent, quick, and mass amounts of Clorox bleach directly to the eyeballs. It may sting a bit, but that's a downside to medicine.

Seriously though.
It's freaking beautiful!
The colors look amazing, the realistic background mixed with the cartoon characters is just stunning, holy crap!

I have kind of a Yin-Yang thing going on.
I also think of playing cards when I see this. XD
N-not that I'm implying one of them is "evil".
...though Di IS kind of an anti-hero...

The air bubble on Di's head constantly circles around and squishes like a normal bubble and I tried my best to display this in the picture. That's why it looks "misshapen". Also, if I can remember the mechanics of those things correctly, it filters out the carbon dioxide and/or "exchanges" it for oxygen. So, before the comment of "she still would suffocate later" because the carbon dioxide wouldn't get filtered out; it does. Also, this is a cartoon that universe SURROUNDS the fact that it has no logic. Please don't bother me with the technobabble... ><
...okay, I'm not sure if I really did pay attention in Science class or not...
Nah.

If you didn't go to or read the first picture, I'll explain the plot again. Let's see. In another successful attempt to show how much of a sadistic bastard I am for cruelly subjugating my (mostly) innocent little Medic to the worst possible torture, I have now had her curiously watching some aliens kidnapping some mercs on some of the other team. She (stupidly naively) boards the ship when they're not looking and has a browse around. She then hears them coming and hides. Unfortunately, she gets no chance to leave the ship, so she's whisked off with them. Well, the reason she's outed into space is because she's near a port-like area and... uh... they make a jump and... uh... she gets sucked out, if you will. You'd THINK they're do safety precautions for this kind of thing, but then again, a human boarded this ship and they didn't even realize it. Idiots. Anyway, because Di's an oxygen-breathing organic life form, she obviously can't breath in space and is seconds from asphyxiating. Then, Pleep. Thanks, Pleep! quietly seethes in anger :-)
After the popping-the-air-bubble-on-her-head-and-saving-her-life-and-the-cute-thumbs-up scene, Di solemnly looks back at the Earth behind her and wonders how she's going to get back home... Pleep notices this and feels empathy (a feeling I don't understand and have never experienced). Okay, this picture isn't at the same angle for that. But, you get my drift.
From there, you find out Pleep has a name (because he didn't tell her, he can't talk?), and shit goes down. I love spoiling so, the ending to this episode is sad. :-)
lynched

Okay, mind in the gutter in 3... 2... 1...
Di is looking at Pleep's crotch (and feet, for some reason) and Pleep is looking at Di's breasts.
I can understand Di for what she's doing (feet sex with a Kangadoo sounds kinky), but Pleep!
No!
You do NOT do that!
For shame... shakes head
Nah, jk, Di's a nice piece of--
--I mean, an intelligent, beautiful, compassionate... has hard time thinking of anything appropriate and positive to say
fuck it, she's a nice piece of ass
I'd tap that in a second. B)
...
Yeah, I told you my mind'd go in the gutter. XD
It was all accidental, but it's still funny.

Can't you just see them going around in a circle?
I can.
Circles. Circles everywhere.

I wanna pop Di's bubble...
I dunno why.
...I thought that sounded mean, but for some reason, it sounds sexual. I had my mind in the gutter from the start. XD
i do want to pop her bubble tho haaaaaa

Background by PicMonkey.
Earth from WikiMedia.
Both are free to use, are in Public Domain, and are used under Fair Use, as I'm not making any money off this picture or claiming the borrowed assets as my own.