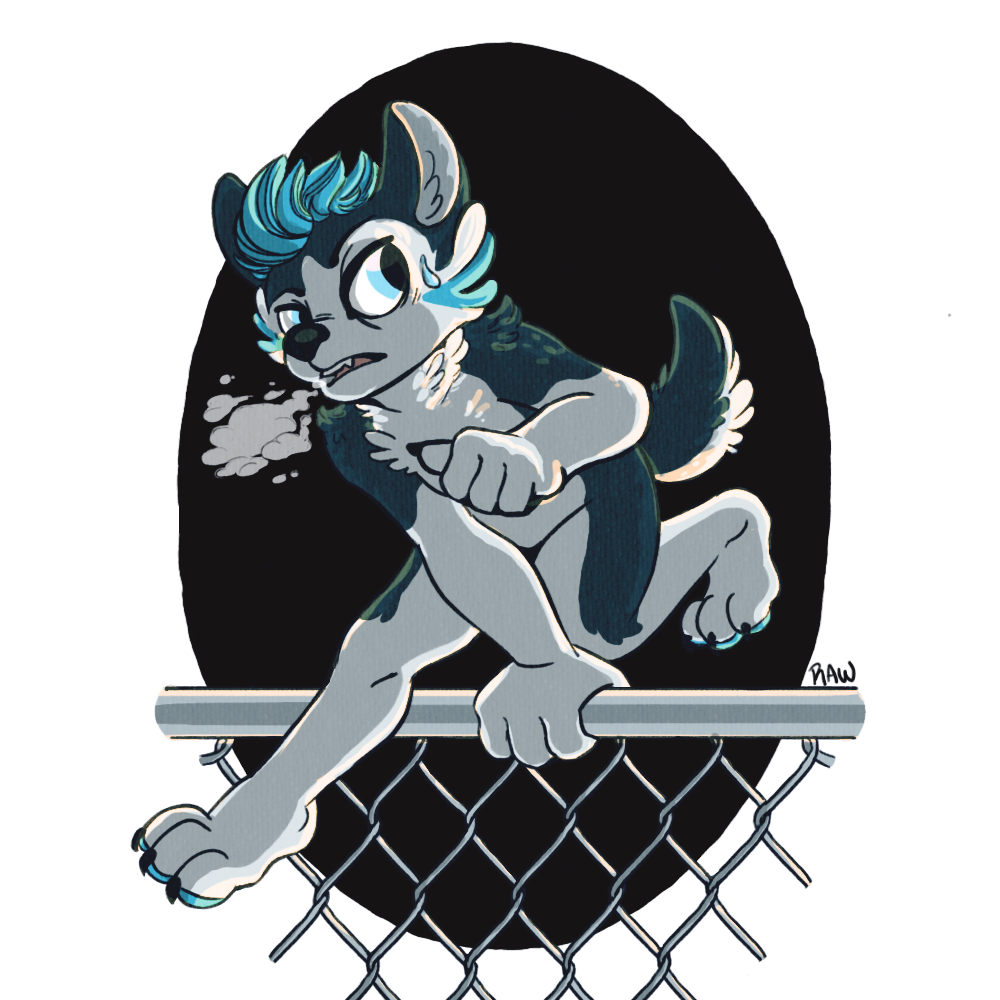 This is a story I wrote for my friend as his secret santa with a commission that inspired the whole thing: https://www.weasyl.com/submission/826993/midnight-run
You know how they say a picture is worth a thousand words? This one literally was just that.

nettle
The story is my own creation.

Wind whistled past Glacier's upstanding ears; whiskers felt like they were tipped with ice. The white as snow and black as coal fur on his back was erect and frayed with fear and mild anger. His breath was laden with steam in the cold night's air. It tickled his throat and stung his wet nose as he ran into the blackness. Who would have thought a simple gesture of kindness could bring a calm event to such a tumultuous excursion? He vaulted over a chainlink fence, the frigid metal tortured his soft paw. But he didn't pay it mind. His priority was to make sure he wasn’t being followed still. But he could hear his pursuers not far behind as their pads tapped the ground with a quickening pace. The fence rattled as he dropped to the other side. "Crap! They'll hear that," he thought to himself. He just gave them the slip a few seconds ago, but they'll be soon on his tail soon-- literally. In the clearing he saw a group of buildings up ahead where he hoped he could lose them.
As he ran, he recounted what could have possibly gone wrong. Nothing stuck out in his mind. He was enjoying a party he was invited to the week’s prior. At the party, he remembered he was getting a drink, while talking to an acquaintance he met through a mutual friend. They gabbed on for a spell about the usual squawk said at parties. When the conversation ended as they tend to do quickly when talking about the mundane, he backed away, bumping into something. He turned about to have a gruff female black feline staring back at him with a hideous scowl adorning her maw. She looked none too pleased to have rubbed elbows with the likes of him. She was wearing a leather jacket with many insignia that he did not recognize-- a biker gang member’s look-- with short cut hair and blood red claws that looked like they could slice marble in fifths. Glacier awkwardly tried to dispel the tension by uttering words of apologetic nature, but she seemed to have perceived it as sniveling. He could not understand why she was so silent and angry. He felt very isolated by her penetrating golden gaze. No one else seemed to take notice of the unfortunate event that was befalling poor Glacier Paws.
To remove himself from the death stare of the cat, Glacier slid his way to the door that led outside. The cold rifled through his fur and he shivered, but not because he was cold, his husky blood wouldn’t allow for that to happen, but to shake off that look that made him feel grimy as if he took a bath in oil. He stood sipping his drink for a moment, trying to forget the event, and enjoyed the beats of the music that permeated through the windows. He wondered where his friends were, as they liked to attend events and such, which usually prevented circumstances like what happened a few minutes ago. The door opened behind him, he thought it was his friends joining him at last, but before he could see who it was, he heard, “You! The one with the curly tail. Get back here!” He turned about and saw the female from before slowly walking towards him. Glacier twitched and took a step back. His motion must have ignited something in her, because she came barreling towards him in full stride. A few of what he presumed to be her friends that just exited the door joined in the chase. Time froze for just a second and Glacier’s brain evaluated fight or flight, fight or flight… Ultimately his instincts chose flight, as he turned and sprinted like there would be no tomorrow, jumping over lawn ornaments and chairs. He raced as fast as he could through some shrubbery and between some homes, where he lost them for a few seconds.
His mind wandered to the present. The open area became more suffocating as he flew down an alley way. The sound echoed as his paws splashed in a long freezing puddle that stretched a span of the alley. A few seconds later, another few splashes sounded behind him. They were getting closer. He continued running until his lungs burned for more air. He made left turn down another alley, so he could lose them.
A grimy wall before him caused him to skid to a halt, breath taken aback. He tried to doubleback. However, they were already there at the entrance-- waiting for him. Glacier, out of breath and heaving for more air to sate his lungs’ desires, slowly walked forward towards the cat and her friends to accept his gruesome fate. The feline stood tall before him, her eyes as bright as if glowing in the darkness. She didn’t seem too far out of breath, as her chest barely rose and fell than one would after a brisk walk. Silence sans the wind whistling over the tops of the brick walls crossed between the opposing forces. Then the feline broke the eery deadness with her crackling voice that sounded like years of smoking and bike rally living.
“Hey, pipsqueak. Back at that party, I wanted to give you something,’ she said as she lithely approached closer with a grin sliding across her muzzle, her bright yellow eyes burning into his body. Glacier winced, prepared for whatever her and her cohorts wished to do to him. He was almost crying. With his eye shut, she grabbed him firmly by the wrist and opened his paw. He yipped as she put something into it.
“You dropped this at the punch bowl, you dork,” she said gruffly. Then turned, clicking her claws. The other two of her friends heeled to her sides as she walked away tail flicking side to side. He watched them make the corner and disappear into the night.
In Glacier’s paw was his cell phone.