Mistakes in gorging were made - art by Axi by Feligris 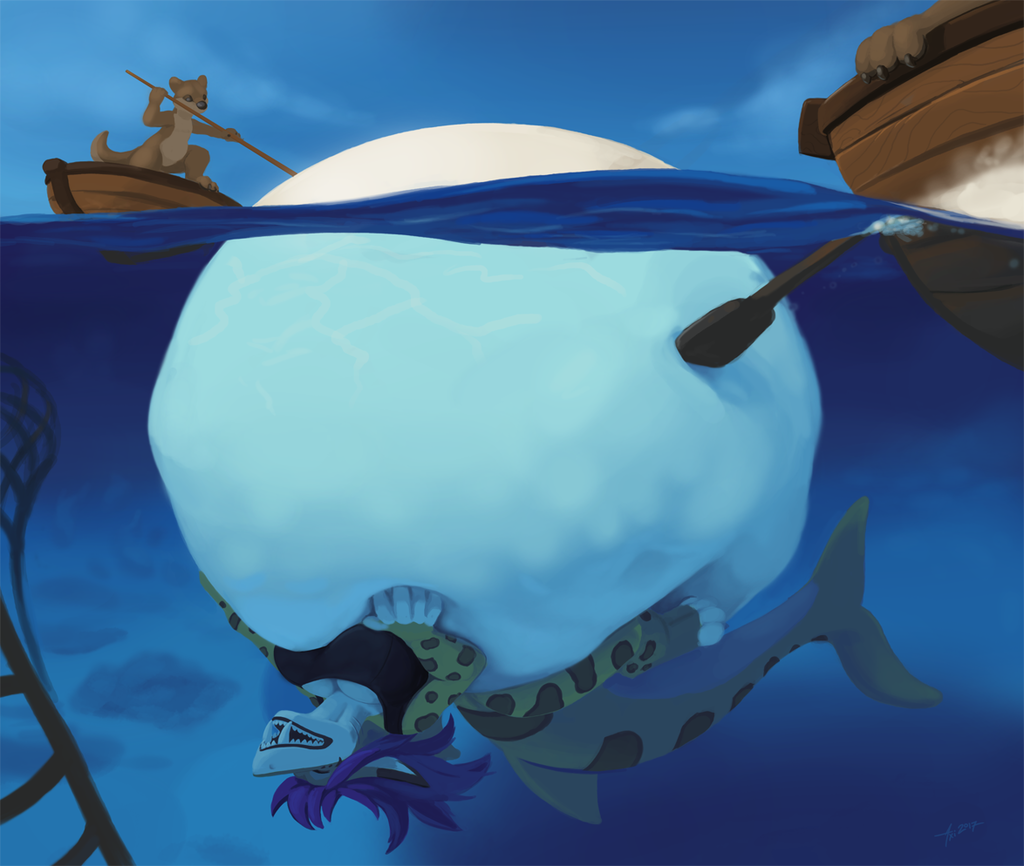 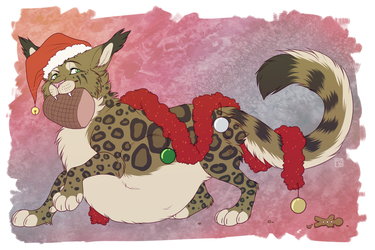 Mistakes in gorging were made - art by Axi

How do you feel when you've made a literally huge mistake and are about to pay for it, and all you can do be along for the ride as your punishment draws near? This is exactly how Felishark currently feels as she bobs helplessly underwater below her enormously stuffed and boyant belly, pressing onto it with her hands and paws while her muscular tail flaps about in vain – however her predicament likely needs some explanation…

It had all begun late last night as Felishark had been at her usual rounds in the lagoon and surrounding ocean, enjoying the concealing darkness and lack of boat traffic while she zipped about in the warm shallow waters – only to be eventually lured past the reef barrier into deep water due to the alluring sound and scent of a school fish stuck in a trawl net somewhere nearby. At first she expected to find only the wake of a fast-moving trawler even if she never heard the engines, but once she had swam all the way to the source she found something far more than she was looking for… an entire disconnected net full to the brim with squirming live fish, seemingly abandoned or lost by a passing ship.

But solving mysteries wasn't top priority for Felishark even if a lost trawl net was a rather large one, both figuratively and literally – no time for being puzzled when there was fresh food to be had! And thus she had rapaciously assaulted the trawl net's neck, essentially forcing escaping fish to swim straight into her large waiting maw while simultaneously opening up the net further to avoid being tangled in it by herself. Her originally flat belly had soon developed a distinct roundness to it, then a noticeable distention, then a large beachball-like bloating, and so forth for hours until the net was finally empty with nary a fish remaining in its freely floating confines whereas Felishark had become an obscenely swollen and lumpy enormous ball of fish the size of the trawl net. She had also noticed to her chagrin that there seemed to be air in her stomach, the added boyancy irresistibly flipping her upside-down and forcing her to surface despite her efforts to swim away, her movement so severely impeded by her overstuffed midsection that she soon simply gives up to reflect her actions under the first faint rays of the rising sun…

She had seen the dark shapes of the approaching boats from below soon after the sunrise, and now they were already all over her defenceless belly with their oars and sticks – jabbing it relentlessly and sending flashes of agony though her straining stomach lining while all she's able to is let out silent gasps as her gills pulse rapidly. It soon dawns on her that they're plotting on guiding her floating belly towards the island with the rest of her, and the furious flexing of her powerful tail does little to steer her course as the boats gather around her. All the struggling, the beginning of digestion within her throbbing stomach, and the general hopelessness of her situation cause her to give up resisting after a while though and focus solely on kneading her full belly to soothe it while people on boats above keep shoving at it with various implements.

Similar to an undersea blimp peeking through the waves, Felishark slowly floats towards the fishing harbour as sun heats up the top of her belly and adds to the tension due to how she feels even gassier than before, burping the occasional bubble cloud although it hardly helps with the boyancy which keeps her afloat against her will. Looking around frantically when bottom starts to rise towards her, she realizes that she's already almost at the harbour - and moments later she's rocked by the light shockwave of someone jumping into the water to swim closer.

Hardly unexpectedly Felishark's eyes soon catch a well-toned female otter who dives right next to her in brief powerful strokes and swings upright, placing her hand on the shark's massive belly as she floats lazily in place. ”I see who has been a bad shark again! All of this fish in your greedy gut could have fed many people for days – though it still might” she articulates underwater with a smirk, gesturing with her free arm and thick tail at the same time as her fingers dig into Felishark's taut hide.

Gritting her numerous teeth, Felishark hiccups another spurt of bubbles and covers her snout meekly. ”But – but I'm so pleasantly full! Or it actually hurts like a bitch to be this full but I couldn't help it...”

”We were betting on you not being able to resist the opportunity! It's why we left the net floating there and a few surprises inside choice fish to make you easier to find.” the otter gal laughs and raps her fingers against the enormous belly in which some of the fish still squirm visibly, before suddenly diving right next to the shark's head with a few kicks. Flipping upright again, she fluffs up the shark's dishevelled hair before boldly slipping one hand under their buxom catch's swimsuit top and gently blocking the fearsome toothy jaws with her other hand. ”Think it as payback for nibbling from our catch for weeks now, but no worries, we'll simply make you give up all the fish and put you back together afterwards – and I'll help you pass time while that stomach is being cleaned out...”

The sudden teasing makes Felishark's eyes and gills snap wide open while her tailfin curls from the sensation of the otter tweaking her nipple, and she soon withdraws one hand from her own belly to slide it on top of the otter's hand under her stretchy swimsuit top. ”Rawwwr, I would've loved to swim away to digest all this, buuuut… you're not giving me a choice right?”

Nodding, the female otter nudges the shark's belly firmly with her footpaw while a muffled splash followed by a water surge tell her that the crane net has been lowered into the water nearby. ”Nope! Way too much valuable fish in your stomach to let you have it… now, just hang on tight and we'll get it over with before the day's end!” she replies almost cheerfully before swimming way to start dragging the net around the shark along with some helpers who jumped in with it.

As the otter disappears too quickly for Felishark to try and plead her case, she flails about for a bit when the crane netting starts to envelop her – then gives up in a fit of nervous anticipation and simply cradles her own belly as tightly as possible when the net starts to brush against her coarse hide, knowing that she will soon once again get her just desserts for being a bad shark on the concrete floor of the fish processing plant which undoubtedly has great many ways in store to relieve her of her ill-gorged booty…