All Gone by Eremitic 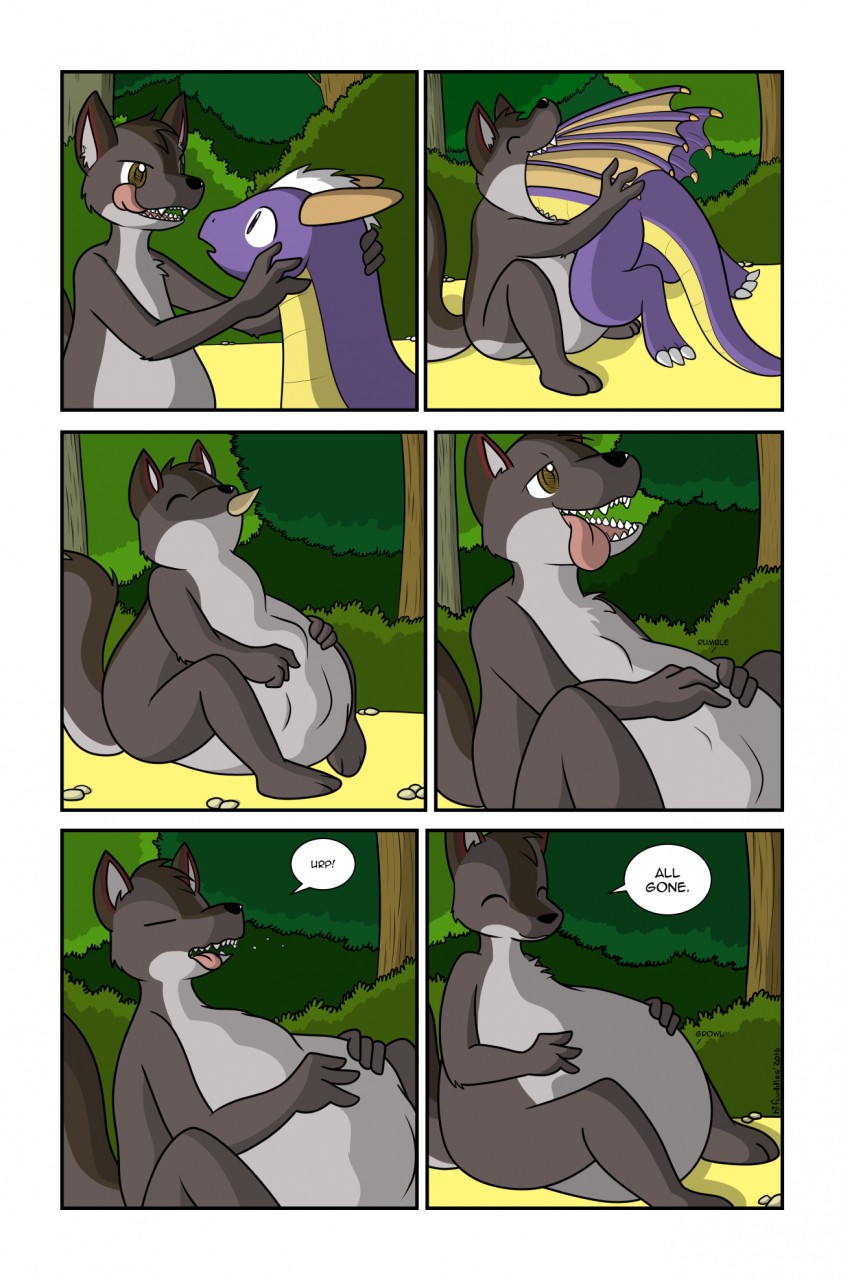 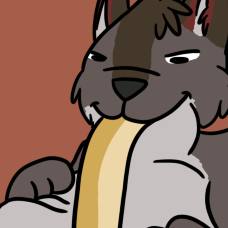 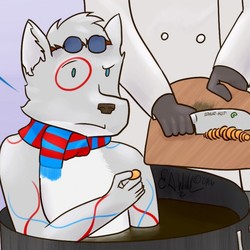 "Uh, Robin? What are you doing?" Marto asked. The dragon's eyes were wide and he seemed almost frightened. Stomach growling, Robin had seized the dragon's head in his paws. His lips parted and his tongue slithered out, sliding along his lips hungrily as he eyed his potential meal. Marto didn't run, he almost seemed caught in uncertainty as if he knew something was wrong but didn't know whether or not to flee. Perhaps he should have.

Robin opened his maw wide, giving his dinner a prime view of the interior. Glistening, ivory teeth caged in a wet, pink tongue, itself almost some sinister facsimile of a red carpet rolled out to welcome all comers into the voracious pit of the coyote's gullet. With little preamble, Robin introduced the dragon's head to the cavernous interior, clamping down and sealing any other sights away. Immediately Marto attempted to pull out, yanking his head back and letting out muffled grunts of effort as he tried to free himself. Robin seemed to be unfazed, his grip solid and strong as he slurped at the dragon's head and worked it back with his tongue and teeth.

Then, with great effort, Robin squeezed his eyes shut and gulped. Hard. Marto's head slid down the coyote's gullet as it contracted around him and pulled him down into its embrace. A bulge near the size of a basketball swelled out from the coyote's powerful esophagus, his meal now primed for consumption. There was no turning back now. Robin grabbed hold of the dragon's shoulders, pulling him closer. Marto's claws left great furrows in the ground as he was dragged forward, but for all his fight Robin gulped again, forcing the dragon down further. With another forceful gulp the bulge of the dragon's head vanished into Robin's chest behind his sternum.

Bit by bit, Robin ate Marto up. The dragon's purple and yellow form writhed and struggled, his muffled cries ringing out from within. It was all useless of course, and as the dragon slowly vanished Robin's gut gradually swelled outwards with his new meal. It was a long, slow process, the wings and hips giving him a little trouble. Before long, however, he was slurping up the last of Marto's tail, his lips sealing around the tip. With one final gulp the tail slithered down Robin's throat in a quickly-descending lump, and all that remained of the dragon to the outside world was a memory.

As the last of Marto curled up inside him, Robin let out a content sigh. Paws resting on his belly, the coyote's maw split into an innocent canine grin, and his tongue lolled out the side of his mouth. Within Marto squirmed and cried out, probably pleading, maybe cursing. It was hard to tell; Robin didn't pay it much mind. As the cavernous chamber in Robin's middle constricted around his meal, he felt something stir uneasily within his stomach. It grumbled briefly within, causing him minor discomfort. Then, suddenly something surged up his esophagus. A small, reverberating belch rolled out of his maw, ejecting what little air there had been within his stomach and simultaneously making him feel much, much better.

The struggles inside his stomach slowed as both air loss and exhaustion assaulted the dragon. Several minutes passed as the fight gradually tapered off, until there was a final, weak shove, and then the coyote's stomach went still. Robin let his paws rove over his massive, unmoving belly as gurgles and groans churned within and the comforting sensation of digestion set in. Giving it a gentle, congratulatory pat he let out a satisfied, "All gone."

sniffles I love a happy ending.

Art is the insatiable htfcuddles on FA