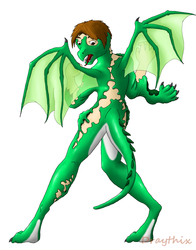 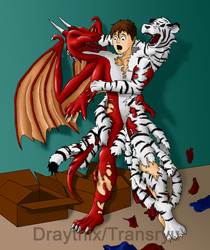 I commissioned this picture from Trunchbull as a way to celebrate coming back from my several year hiatus. It is based on some old artwork of mine that I posted under the name 'Transryu' in the past. Please fave the original here: https://www.furaffinity.net/view/30480751/

I am totally in love with how this transformation sequence came out! Trunch just does such an amazing job with suit transformations and latex suits in general. I especially love how happy the raptor looks at the end :D

Here's the story where the raptor costume first appears: https://www.weasyl.com/~draythix/submissions/1753290/costume-shop-story-2-raptor-suit-transformation

Here's a quick story that I wrote to go with it:

“How long has it been?” Shawn wondered aloud as he worked to unlock the chest he had been hiding away. After finally opening the lock with a satisfyingly loud click, he swung the chest wide open to reveal the rubbery red material of the costume he had been trying to forget for what seemed like ages.

A terrifyingly realistic mask based on the reptilian style raptors from movies like Jurassic Park laid on top of the pile, and Shawn was relieved to see that it wasn’t already staring at him. He still couldn’t quite believe that he was going to try this thing on again, and he hoped that he wasn’t making a mistake.

After putting on a pair of garden gloves in hopes of keeping the thing from waking up too soon, Shawn picked the costume up and spread it across his bedroom floor. He couldn’t help but feel a bit nostalgic as he looked over its red striped pattern, creamy white underbelly, and sharp claws. To almost anyone else this would just seem to be an extremely realistic, if unwieldy looking, raptor costume. A part of him was worried that was it all was now, and that after all this time the strange magic it had been infused with had worn off.

Another far more likely possibility is that the thing was still alive, and that it was going to turn him into a feral beast again. After all, that was probably what was going to happen if his theory about why he couldn’t control the thing before was wrong.

Shawn pushed this worry from his mind and began taking off his clothes. They would just make the coming transformation more uncomfortable after all, and he didn’t need distractions.

After feeling as prepared as he could be, he picked up the raptor costume and began sliding his legs into it. A sensation which felt similar to static electricity danced across his skin as his feet passed through the smooth material. Shawn smiled, he knew that sensation. It meant that the costume was drawing energy from him, and that could only mean that it was still alive.

As if in response to his thoughts, the costume stirred around him. It contracted tightly around his legs as if it was afraid he was going to try to get away. Then its upper body lifted up and began wrapping around his abdomen, and an angry hiss erupted from the suit’s mask as it glared at him.

“Yea yea, I know you’re angry because I left you locked in there for a long time, “ Shawn said awkwardly. “Let’s give this one more try and see if we can find a better solution than always fighting each other, alright?” As he spoke, he was already feeling his legs and feet cracking and reshaping under the influence of the suit’s magic.

The costume gave no outward signs that it understood him. Instead, it continued climbing its way up his chest. As it did so, Shawn did his best to stand straight has his legs shifted and grew to fit their new skin. Somehow, he had forgotten how strange and exhilarating these transformations had felt.

Shawn tried to speed things along by putting right arm into one if its sleeves, and the costume seemed to eagerly accept the offering. The suit’s free arm grabbed the loose sleeve and pulled it tightly over shawn’s arm. As it finished, Shawn wormed his left arm into the other sleeve, and hoped that his cooperation would lessen the mental battle he was going to have to fight soon.

It did not take very long before Shawn’s entire body up to his neck was covered. He could already feel his chest widening and his tail growing. Everything below his waist had fully transformed and grown to the point that the costume felt tight around him. Slowly, the sensation of being in a costume faded away as it began merging with him. Its synthetic looking material began transforming as well, and became real flesh and scales.

After taking a deep breath, Shawn grabbed the mask with his still transforming hands and pulled it over his head. As he did so, the seam along the back of the costume almost immediately sealed shut, trapping him inside. It only took a few moments for his face to begin transforming to fit his new skin.

As his head merged with the mask, he felt the familiar sensation of the suit’s feral instincts invading his mind. In the past, he had tried both giving into the suit’s influence and fighting it. Neither of those options had worked out very well. Simply becoming a feral raptor was dangerous, but he had learned the hard way that he lacked the willpower to simply block it out and remain a human in a raptor’s body. Shawn had locked the suit away for years because he didn’t think there was any safe way for him to wear it.

However, not wearing the suit which allowed him to become the creature he had always dreamed of becoming had been tearing him apart. He had never been able to get it out of his mind or forget about it, and was regularly tormented by dreams about it. However, after a lot of thinking and soul searching, Shawn believed he had found a third option.

Instead of fighting or leting the suit take him over, he accepted it as part of himself. Its thoughts mixed with his thoughts, and he allowed the raptor’s mind to take root in his brain without fighting or giving into it.

For a moment he sensed confusion from the raptor as it tried to figure out why he wasn’t fighting it like before. Then it snarled and raged at him as if it didn’t like what he was trying to do. The creature didn’t seem like it wanted to forgive him or share with him. Anger filled his mind, and the costume tightened painfully around his body. However, Shawn simply stood his ground and didn’t let it overwhelm him.

After what seemed like an eternity, the suit raptor seemed relent. Shawn couldn't tell if this was because it got tired or had accepted him, but the distinction between his thoughts and the raptor’s thoughts began to blur. As their physical transformation finished, a new being was created from their mental merger as well.

Shawn the raptor smiled as he tested his new body. Never before had he felt so complete. His body was that of a raptor, but his mind was a fusion of his human self and the raptor suit. He could feel his wild instincts and looked forward to indulging in them, but felt that he didn’t have to worry about crossing any dangerous lines now. Never again would he have to worry that he was going to lose control and risk hunting a human, but all the deer in the forest around his home were fair game. After giving off a loud hunting call he made his way out of the house to find dinner.