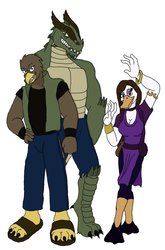 Species: Cow
Abilities: Pheromone Production, Mind-Controlling Pheromones, Seductive skills, and fairly limited hand-to-hand combat
Background: Isabelle began life as a middle class girl who wanted to live a lavish life, showered with riches and waited on hand and hoof. However, such a life did not come to her as easily as she wished. Most of her childhood was middle class and boring. Although things changed a bit when puberty struck and she became a knockout gorgeous woman. Boys fell over themselves offering expensive jewelry and money for her affection. However, after high school and in the middle of her college years, Boys became somewhat bored with her self-centered and superficial behavior. She came to the realization that the only way to get her life of luxury was stealing. She began a somewhat rewarding yet tiring life of thievery. While she was gaining wealth and whatever else she wanted, Isabelle found it tiring work to amass it herself, and slightly wished that there was an easier way of doing it. Strangely, Isabelle got her wish when she stole an experimental perfume from a cosmetics company. When coming home, she accidentally spilled on her body. Much to her surprise the perfume triggered a unique chemical reaction that gave her the ability to release powerful pheromones that caused men to become her devoted servants. She used this ability to control security guards, police, and other men to steal for her and do whatever other whim she has. She thus became the villainess known as Isis.

Isis was a late addition to the villain roster as I noticed a small amount of female villains in the rogues gallery. Of course that might just be the fact that I don't have many solo villainesses. I named her Isis due to some mythology that says that Isis was originally Io, a greek girl who was one of Zeus's many wives. Zeus turned her into a cow so that Hera wouldn't get suspicious. However, Hera figured it out and sent a gadfly to torment poor Io. She was chased out of Greece by the gadfly and finally arrived in Egypt where (as some myths go) she became the goddess, Isis. Enjoy.