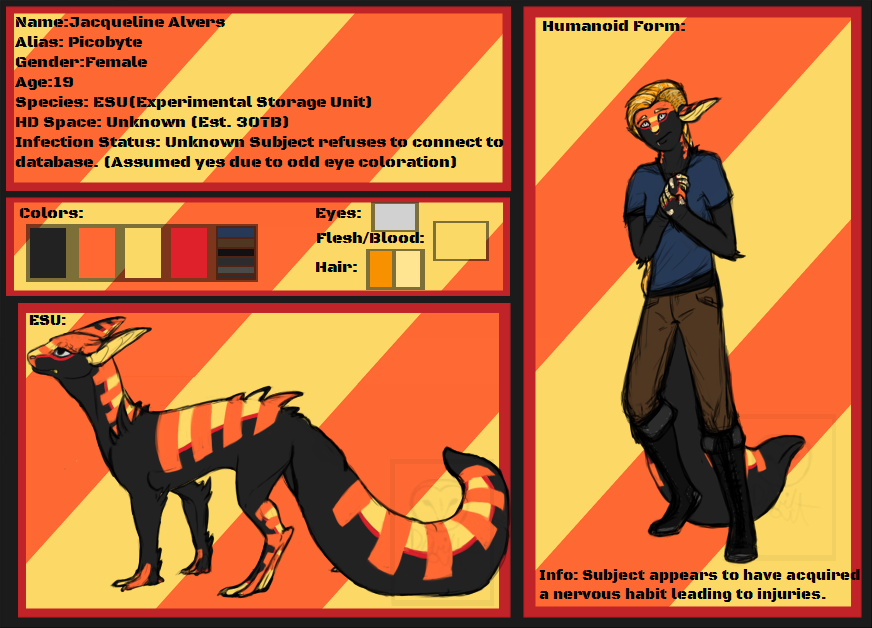 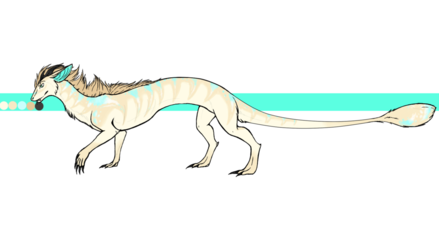 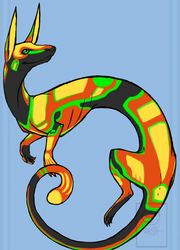 Name: Jacqueline Alvers
Alias: Picobyte, Jackie
Age: 19
Gender: Female
Species: ESU/Expers ( fav.me/d7lcw48 )
Glitches: spikes on shoulder/back, lower back, elbows, and outer portion of wrists (glitches are willingly kept in humanoid form for comfort reasons, her caretaker swears its a possible malfunction but it's not causing visible harm and lets it be)
Height:
ESU: 3'4"
Humanoid: 4'6"
Residence: Neo Terra/ New york
Occupation: N/A due to sever anxiety attacks she is forbidden from going into the workforce until the issues are resolved

Picobyte would be classified as a nervous wreck, it is impossible for her to talk to otehrs or even survive on her own accord because of it. she is incredibly skitish and appears to have no social skills, she prefers hiding in a hole or in the rafters over being near another being that is not her caretaker. The only times you will see her outside is when her caretaker has forcibly removed her from the building and or locked out, in this case theres a very high chance that she is hiding behind a person or beneath and object possibly on the verge of tears trying to vanish.

Compliments are very foreign to her, you may think you're doing good but all you've done is sent her into a state of shock; which depending on who you ask may or may not be better than the tears you'll recieve should you insult her intentional or otherwise. sadly enough shes more ready to accept an insult over a compliment.

Pico is also incredibly paranoid and thus refuses to hook up to any digital devices letting her virus status and what information she has stored stay hidden. attempts have been made to force her to hook up but results have resulted hazardous. Because of this she is digitally non-existent and invisible, very few beings know of her.

Thoughts over introducing her to a service animal have been conflicting as it is unknown whether the animal would actually help her or would just be harmed.

Bit of Backstory:
After creation pico was shown to be a very social creature who loved meeting new people and during her school years revealed a love of reading and writing stories however it seems something happened to her during her later years ,records have shed little light on what occured, that caused her to start revealing signs of severe anxiety. at first it seemed that her programming decided she would be a shy person having her speak very quietly and rarely even looking at another being with slight fidgeting here and there, in mere months these signs became worse in with her beginning to injure herself unintentionally through biting and other nervous ticks and within weeks swiftly grew to severe paranoia and a fear of nearly everything around her. once she was found cowering the corner of her shared room by the roommate it was then decided a permanent caretaker was needed and she was moved out of the premise and put under watch/study should this ever happen to another esu.

suggested reasons as to what could've caused such a severe change were:
a new strain of virus that couldn't be dealt with their current technology and grew with the esu
the effects of a failed antivirus causing the exper to go into lockdown (eyes used as evidence)
a forced system restore set so far back taht there is insuficient data for the body to use effectively possibly as a result of trying to remove a virus that has rooted itself deeply into the programing. (eyes showing off the malfunction)
was captured by the opposing faction and suffered great trauma
"a love of cats so great the esu decided to emulate them for all eternity" said by a researcher that is no longer working for the company.

Interests/Likes:
Reading
spying on others who have decided to stop by to visit her caretaker
working with her hands (if ever allowed)
Fruit

Meta Info:
Does not currently have any known viruses her eyes are merely silver possibly due to a glitch or bug. (also viruses and malfunctions arent hand-in-hand and those are just signs of a malfunction when writing the info i was being dumb and didn't realise that till i posted the ref. also i use paint to type so i can't go back and fix it easily)
actual reason for her behaviour will be revealed through plots should i miraculously win the dta for her
that is not a scar it is actually the result of her biting through her lips. again.
she does actually like watching and being near felines so a service animal would be great for her.
without the anxiety issues she would probably have been in a factory or workshop making things by hand.
for her humanoid form i kinda decided to change the face marking very slightly as to avoid what would look like a moustache otherwise. for that reason and the fact she kept looking like a creation of hitler and i figured she already had enough baggage as is.
This took an insane amount of time