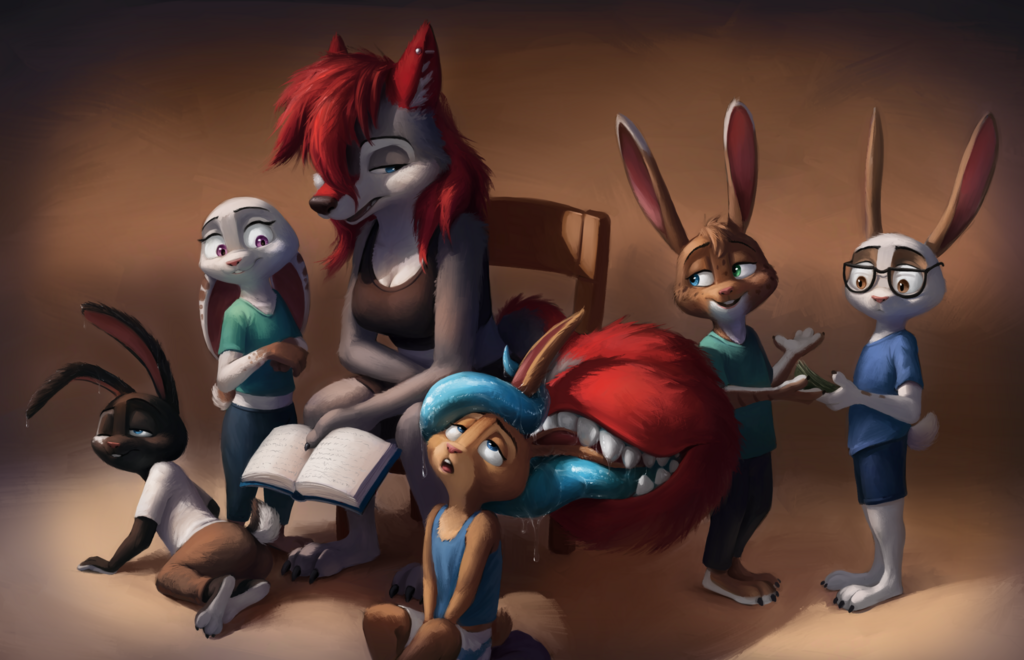 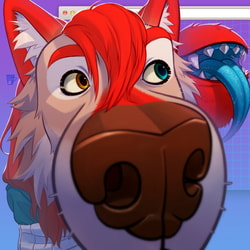 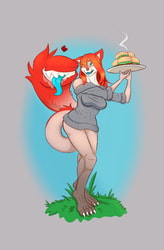 Lucario389 came up with a hilarious idea of Ahya being used as a quick buck and taking the sensitivity of rabbit ears into account, put Ahya into the role of rabbit masseuse. Of course, there's a person attached to that tail, Taylor. So having her going along with the idea, albeit begrudgingly is humorous - especially since it actually turns out to be a highly successful venture! The call went out in the fandom for owners of rabbit characters to loan their rabbits for Ahya to suckle on their ears. It was an odd request to be sure. Many declined because they were quite unsure of what would happen to their rabbits or the nature of the pic. This was understandable. I only got a few people who were interested and even then, once I picked out the rabbits I needed, I still required one more and S1M, the artist, offered his Charlie to complete the set. Overall, a fun group comm to work on with other folks!

The little gasps, moans and squeaks were interrupting her concentration and Taylor really couldn't focus on the book at paw. She could ignore the feeling through her tail of Ahya suckling, slurping and utterly ravaging the rabbit's ears. She had grown accustomed to tuning what Ahya did out if it wasn't anything remotely dangerous she was doing. However the noises the rabbit made was a bit disconcerting and she had to stop reading to ensure they weren't going into a seizure. As expected, the rabbit was lost to all reality - with mouth hanging open and a bit of drool slipping from their mouth, they looked to be in a zombie-like state. She knew Jake had told the truth about rabbit's ears being sensitive, but she never expected to this degree.

The other female rabbit near her was practically panting in excitement as she looked on the other rabbit receiving her well-bought massage from Ahya. Either she was not afraid at all being this close to a larger predator or she had her eyes only for the experience that lay ahead of her. The black rabbit had barely moved in front of Taylor and several times she had to push him away with her foot as he continued to use it as a resting spot. That rabbit was especially atrocious having been around for several massage sessions in the past few days alone. Taylor hadn't bothered to learn any of their names. It didn't feel as weird to keep that distance and try to maintain some sense of professionalism in a job that seemed to be anything but.

Taylor sighed as she looked over at the new client who was paying Jake, nose twitching with nervousness as he stared at what was happening. Money was exchanging hands into Jake Thumping's. "Remind me again why I let you talk me into this?"

Jake smirked. "You're doing a valuable service to the rabbit community. We, as prey mammals, have a built-up tension in our bodies and sometimes we can die of heart attacks if we stress out too much. By relieving our stress, you can prolong our lives. So really, you're saving lives here."

Taylor narrowed her eyes, looking over Ahya who was enthusiastically taking both ears into her mouth for suckling. "Then why do I feel like I'm enabling them in some sort of addiction?" She pointed down at the black rabbit. "That one has been around twice today!" She turned to the white rabbit near her, who stepped back a pace with an excited giggle. "This one has been acting goofy around me since her first time two days ago! I feel like I'm a drug dealer." She closed the book and turned a bit more fully towards Jake. "For such a stressed out species, you'd think they wouldn't want to be near me, being what I am and how Ahya looks."

Jake looked at the nervous bespectacled bun. "I'll admit, each one of them comes with a bit of trepidation when they get their first massage, but they all end up being return customers. Feel good about this, Taylor. You're a national treasure to use rabbits for doing this."

"National treasure, huh? I wonder if that's me or Ahya who fits that description." She rolled her eyes. "He's the last customer today, ok? I got better things to do this afternoon."

Jake nodded. "We made a lot of bank today. I promise I'll make it up to you and give you a nice dinner tonight!"

"You better! You owe me one after doing all this for you." She slumped, opening up her book again, trying her best to tune out the rabbit's squeaks.

"Not for me, Taylor. For us rabbits!" He smiled, counting the fresh stack of greens in his paws.

Owners and rabbits in order from left to right: