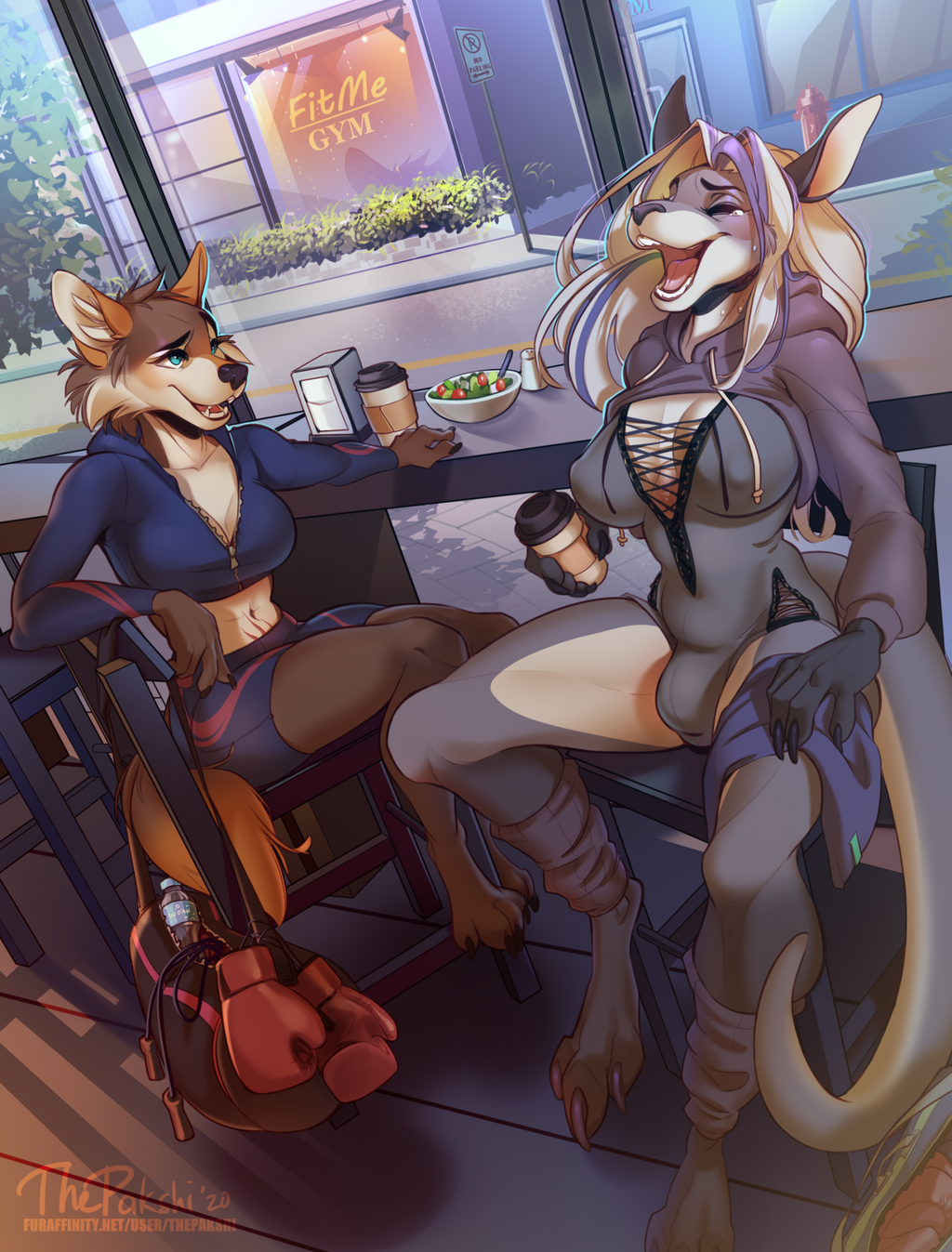 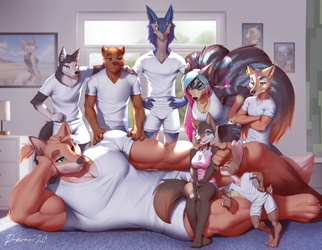 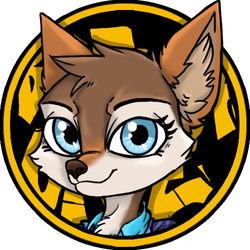 After Workout Bonding - By ThePakshi

Imagine my shock when Greyshores got me back for my gifting generosity with this wonderful piece of surprise art from one of my favorite artists! Not only that, but Greyshores has teased a string of images involving my Murana with her Kyra. I've no idea what will happen next, how many there will be, nor how many are in production and when. I'm being kept in the dark on purpose (with my permission) so that when they sprout up, I will be most surprised and elated. Now my role in all this is to create a story out of this string of proposed and planned set of images. I don't know exactly what's coming until it does and I must, as a writer, be flexible to work the story in the direction Greyshores has in mind - an interesting exercise for both of us! Here's the start of a fruitful friendship between Murana and Kyra!

She was most definitely new here. Murana hadn't seen the kangaroo around in the gym ever and she had been going to this 'Fit Me' Gym for months now, maybe even over a year. Murana tried to be inconspicuous of her observations of this amazonian sized roo working the bench press like it was nothing. Even Murana had trouble hitting the weight this girl did.

She felt like a guilty spy as she nonchalantly 'happened' to be using the exact equipment or machine that was either right next to or nearby the striking roo. Murana had been hoping for a gym workout partner for the longest time to keep herself motivated. Most of the patrons of the establishment were male and their intentions were made very clear from the outset and it always put her off. Yet here was a fellow female doing her best to maintain her figure for her own self edification just like Murana. If she was a new resident in this part of town, maybe she might be a cool friend to workout with and keep each other's motivation high - Murana sorely needed that these days.

Murana's senses could pick up that the kangaroo was checking her out too out of the corner of her eyes. Realizing that nothing was going to happen unless she initiated first, she walked past the roo all suited up with her boxing gloves while the roo was bandaging her palms up in preparation. She pointed at the hanging punching bag nearby.

"You using this thing?" She grinned.

Kyra looked up and appeared a bit startled at being addressed. She blinked a few times and gazed over at the bag Murana was indicating. "Oh, no! Of course not! I'm sorry, go right ahead."

"No need to apologize." Murana smiled, nodding her head. "I won't be long on it, last activity of my regime today and all. Name's Murana."

"Kyra." She smiled back, continuing to apply the bandages between her fingers. Murana could sense the roo's gaze on her as she began to punch the bag ferociously. Bobbing and weaving and picturing imaginary foes as she slammed fist after fist into the hard leather. Kyra low whistled. "You seem to have quite the technique there!"

Murana blushed, but shrugged it off as if it was no big deal although it pleased her to be complimented like that. "Just practicing daily and watching instructional videos, that's all." She didn't exactly want to give away the real reason of her skills due to her moonlighting as a vigilante - let alone to a person she just met and only wanted to be a workout partner with. Now panting, she stepped back from the swinging bag and waved off at it. "All yours now, Kyra."

Kyra stood up and looked down on the petite wolf. Gods, she was tall by at least several feet. "Thanks, I'll try not to show you up!" Kyra chuckled, which drew an odd look from Murana. She coughed slightly and got to work on the bag, making it swing twice as far than Murana had it going.

Trying to catch her breath before heading to the locker room to pack up, she watching the roo pound into the bag. "You come here often?" Murana broached the topic at last. "Haven't see you around."

Kyra shook her head, focused on the bag at hand, but Murana could detect her eyes drifting back to her seated position. "First time, actually. Something happened at my work gym and it needs repairs. So I scouted around to find a good replacement while that's happening. I don't get out much otherwise."

"Ah, that's too bad. This is a good gym here. One of my favorites exactly." Murana was about to say more when Kyra's final punch broke the bag off it's metal hook's hinge, ripping part of the ceiling out in the process, its bulk flying across the room before slamming into a wall and splattering a mess of sand everywhere. Wow, she was pretty strong too. "Got some anger issues there, Kyra?" Murana tried to lighten the sudden downer of a mood.

Kyra looked panicked, staring at the destroyed punching bag. "Oh crap...not again. I'm gonna have to contact my boss to pay this gym in damages."

Murana stood up, waving her off. "Don't worry about it. I got enough money that I can cover this."

Kyra dolefully looked over at her. "I can't. I don't want to put this burden on you."

Murana barked a laugh. "Nonsense. Just get yourself dressed down to head out, I'll go see to the manager about this. It's really not a big deal. Besides, you've impressed me with your technique as well. Tell you what, head on over to the Wheat Mill across the street and I'll buy you lunch."

It took nearly five minutes to convince Kyra that it was going to be alright and she should just let this slide and not be hard on herself. Murana soothed things over as easily as she said she would and packed up her gear. Heading across the street, she could see the tall roo in the seats lining the window. Ordering something for herself seeing as Kyra had already done so for herself, Murana got her food and sat down next to Kyra - her size becoming more obvious being this close to the tall roo.

"...and so I tell him: That's not my handle bars, that's my driveshaft!" Murana delivered her punchline.

Kyra began busting up laughing, nearly spilling her own drink. "Oh gods, that is insanely funny. And he had no clue at all?" Murana shook her head. "That's hilarious. What a dolt." Kyra began to wipe away the tears of laughter from her eyes. They had been chatting together for nearly an hour now. "Whew, thanks again for covering for me back there in the gym. Sometimes I don't know my own strength." Kyra seemed pretty relaxed.

Murana's eyes bulged slightly when Kyra leaned back against the long table and spread her legs in comfortable repose. Noticing the additional package she hadn't noticed was there earlier, Murana chuckled nervously and brought her eyes back up to Kyra's face. "Don't worry about it." This was certainly an interesting twist. Still, Kyra seemed like a nice gal and very easy to talk to. "Say, how long did you say your work gym would take to rebuild?"

Looking over at her, Kyra responded, "Most likely several months."

"Alright, how about...if you want, that is...you be my gym buddy?" Murana was actually a bit shy asking this. It was one thing to engage in romantic endeavors - she was used to that arena. However, attempting to make a genuine new friend to hang out and hit the gym with? Why was that so much harder?

"You mean, meet up daily over there and work out together?" Kyra clarified, a glimmer of a smirk on her face.

Murana got a chill of both excitement and a bit of trepidation. Why was it that Kyra looked really hungry for something just now? "Well, yeah. Was feeling kinda lonely hitting the weights and treadmill by myself all the time. Could use someone else to talk to to make the time pass quicker."

"That sounds lovely. I wouldn't mind at all." Kyra winked at Murana, lounging back further and basking in the glow of a friendly face sitting beside her. And thus began a friendship between Murana and Kyra. Who knows where it might lead?