The hyena perfume - page 7 by Danwolf 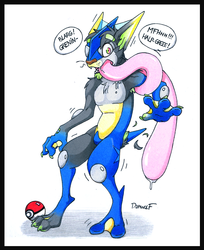 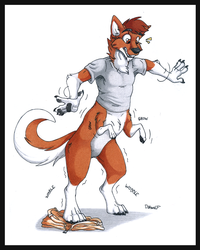 There you go guys. I always keep my word,even if It takes forever. (GODDAMNIT I should have done this page years ago) Anyway,now I'ts finished,I hope you guys like the real ending.

Looks like our dragon mage is in a bit of trouble ! He got hypnotized by the yeen's gaze and now he will be eaten or turned into one of these monsters...but SUPRISE ! Epigon isn't stupid,he keeps antidotes and sleeping serums in several hidden boxes around the laboratory,with magical abilities he can easily trick the dumb beast. (He's a powerful wizard and could easily beat the Danyeen up but why not have some fun by tricking him and watch his dumb face as his plan unfolds successfully ? >:3) Dan will get some sleep for now and afterwards probably a week of housework and no allowance in the lab for a month,maybe he will learn from that,but he probably won't.

This comic was a lot of fun to work with,tough after a while It got boring,I wanted to do other projects (you guys can clearly see this from the big pauses) also I'm lazy haha :D I know you guys will probably wanted a bad ending variant but have to pay for that one,because I am no longer wanting to continue this comic,I have a lot of other ideas to go with and I want to continue the "You're what you eat" series. Anyway hope you guys enjoyed it ! Stay tuned.