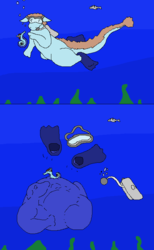 There... appears to have been a MAJOR error here! As a bit of a Halloween-themed commission, I asked if Spencer might draw Daea dressed up in a Charizard costume (bit of a bad decision, as 'zards are Spencer's favorite meal...), which would lead to him getting mistaken and eaten. However, Spencer took it one step further, in that, while he was kind enough to reform Daea after gurgling him up, he... seemed to have a few wires crossed, and now Daea assumed the form of Spencer's favorite feast! Oh well, I'm sure Daea won't remain ungobbled for long after this, and Spencer will get things right the second time around... maybe? =I