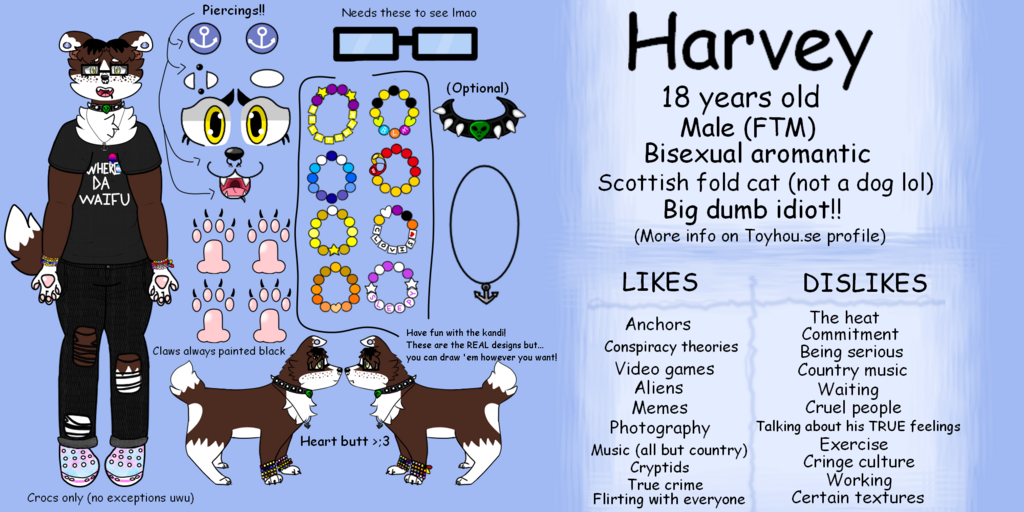 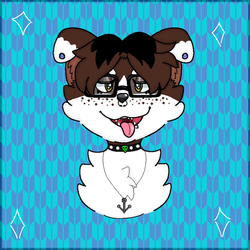 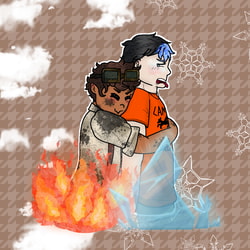 he was in dire need of a face lift bc i have changed a lot as a person!! also my friend lau is teaching me anatomy, so i'm trying me best!!
i'm very excited to hopefully get some ref sheet commissions in the future because they are very fun to do!!

If you are going to draw Harvey for any reason, please make sure to read the section in this description below. I don't mind if you use a ton of artistic freedom with Harvey, but there are some main details that I really would like to see if you draw him as he represents me almost entirely and is very special to me

(If I have commissioned you to draw Harvey, please pay attention to this section.)

Physical attributes: Harvey is NOT a dog. He is a Scottish Fold Cat who just happens to look very dog-like. With that being said, Harvey has floppy ears, a nub tail, and a chubby/curvy figure. In anthro form, he is 5'4, meaning that in his feral form he is not very tall either. Harvey has several white markings: white-tipped ears, a white oval that goes up his muzzle from his nose, a white bottom portion of his face straight across from his nose (has many brown freckles in this area,) a white chest and stomach, white socks on each of his paws (the ones on his hind legs are MUCH longer,) a heart shape on his butt, and the tip of his tail. His nose is black while his paw pads and his tongue are all light pink. The inside of his ears is tan. His eyes are an intense yellow, and he wears glasses all the time to see. He has several piercings: blue gauges with white anchors in his ears, a lip ring, a septum piercing, an eyebrow piercing through his slit eyebrow, and nipple piercings though you never see them because he is always wearing a black binder. He wears four Kandi bracelets on each arm that DO have specific designs, but it really doesn't matter at all. He also wears an anchor necklace, but the black, studded alien choker he wears is completely optional. He mainly wears black, comfy clothing with graphic T-shirts, ripped jeans, and obnoxiously colored crocs. He often wears buttons/pins on his shirts as well.

Personality attributes: Externally, Harvey is an incredibly extroverted individual. He is very loud and spontaneous and doesn't mind looking like an idiot and plays it off well. He never seems to stop moving or fidgeting. He will go out of his way to make anyone laugh or feel good about themselves and has little to no issues making people like him (even if they hated him prior to getting to know him.) He is very flirty and often expresses affection to his friends by flirting with them. He often pretends to be very dumb to make people feel less intimidated by him, but he's actually rather smart. Internally, Harvey suffers from severe depression, anxiety, and BPD. Due to this, he is actually an incredibly pessimistic and negative person. He's almost always incredibly depressed or violently angry, but he keeps it pushed down until he is alone and can vent out his frustrations and sadness where no one can see him. He is incredibly self conscious and repulsed by himself and his behavior, but he struggles with trauma-based hypersexuality and thus truly cannot help it. He has a phobia of commitment and the mere idea of being in a relationship frightens him more than anything else. He also actually despises most people, but due to his "everyone must like and/or fall in love with me" complex, he never lets it show until, once again, he is alone. He often acts up on social media accounts that are not connected to his name or identity as a bad way of coping.

Permissions: Please feel free to use artistic freedom with his outfits and accessories! Please do not genderbend Harvey unless I have given you permission to do so personally. I give you full permission to draw him beat up/gory, nude, in sexual situations, and using drugs or alcohol in your artwork. Please do not draw him smoking cigarettes though because it makes me uncomfortable.