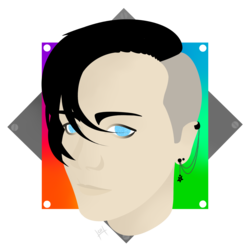 [GIFT] At The Coppercloud Cafe

Inspired by an RP thread between myself and FiveSuns, featuring my character, Cyril Reisiger (on your right) and her character, Lewis Madden (on your left)!

In this roleplay, Mortals & Monsters, Lewis and Cyril are both Gifted mortals, which means that they were born with a single superpower but have a normal human lifespan. Lewis has unnatural strength, while Cyril receives sporadic visions of the future. Ordinarily, this would make them unique and amazing; unfortunately, they were born in a world populated by much more powerful creatures who vastly outnumber the Gifted. In this universe, the Gifted are mere footnotes. The most valuable thing about them is their blue blood, which has a unique, intoxicating effect for vampires. Many live in fear of being exploited for their blood, while others use their blood as a bargaining tool.

Because most species are either stronger, faster, longer-lived, or have the ability to use magic, most Gifted struggle to live normal, fulfilling lives as contributing members of society, which is where we find these two: Lewis is a bounty hunter currently recovering from injury, and Cyril is a paranoid cultist struggling to adjust to modern life. The two have only just met and are speaking carefully, slowly building a friendship that could be beneficial for both.

If you want to join the RP, feel free to click the link above and check us out! The world is so much fun to explore, easy to understand but far from boring, and everyone there is super welcoming and supportive. There are so many different species to play, so many stories to tell, and the sky is pretty much the limit. See you there!